The Essence of Poland NEW TOUR

Discover the variety of Polish landscapes and stunning architecture on this 10-day tour, covering Poland’s top attractions. With an expert guide, you’ll visit Warsaw, Krakow, Wroclaw, Poznan, Torun and Gdansk where you’ll be in awe as you walked step by step through these picturesque old towns. Travel aboard a comfortable bus from the Polish seaside to the foot of the majestic Tatra Mountains. The itinerary also includes the UNESCO listed Wieliczka Salt Mine, Castle of the Teutonic Order in Malbork and Auschwitz concentration camp.

Ends in Warsaw
Group Size Max 15
Average rating no reviews/5
Show prices in: PLN USD EUR GBP CAD AUD
The proposed programme is a framework, the order of the visited objects may change.
The tour is not recommended for disabled people.
Triple room - upon request!
Included in price
Not included in price
Read full reservation conditions
Day 1

Individual arrivals to the hotel.
Evening:
Meet your tour leader and other travellers on hotel’s lobby. After that, taste the local cuisine during a welcome dinner.
Overnight stay in Warsaw. 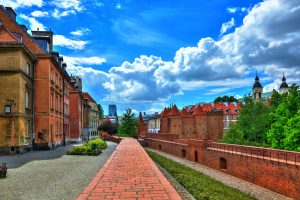 Morning:
The first day begins with the very best of Polish capital, Warsaw, beginning in the historical centre of the city that was rebuilt brick by brick after near-total destruction during WW2. Next, you’ll travel through the historical Jewish Ghetto to see what remains of the wall that once kept Jewish population separate during Nazi occupation. In the end we travel to the Royal Lazenki Park to see the most stunning gardens in the city – you may even spot a few peacocks!
Afternoon & evening:
Free time. We recommend a visit to: Warsaw Uprising Museum, The Museum of Polish Jews, Praga district, Wilanow Palace or Vistulan boulevards.
Overnight in Warsaw.

On the way to Krakow, the city of Polish kings 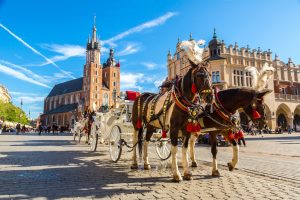 Morning:
Depart to Krakow. After arrival, check-in the hotel.
Afternoon:
You’ll start by meeting one of the best local guides who will take you through the heart of Poland’s cultural capital. Beginning in the largest medieval square in Europe, you’ll explore 16th-century cloth hall and take in the Gothic altar in St Mary’s Basilica – the largest in the world. Next, stroll along Krakow’s infamous cobblestones and make your way to Wawel Hill and the Castle of the Polish Monarchs, the heart of Poland until the 16th century.
Evening:
Free time. Overnight in Krakow. 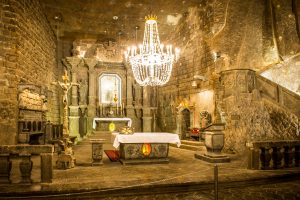 Morning:
Descend underground, into the eerie chambers of Wieliczka Salt Mine, where you’ll discover medieval chapels, halls and galleries on three levels, carved entirely from the salt and bedrock. The visit includes impressive Chapel of St. Kinga with unique reliefs and altars. A city underneath a city, Wieliczka Salt Mine is truly a breathtaking feat of human engineering.
Afternoon:
Free time for private expeditions.
Evening:
Feel the unique atmosphere and flavour of old Polish inns. Enjoy a folklore show and traditional Polish cuisine in the outskirts of Krakow.
Return to Krakow for overnight. 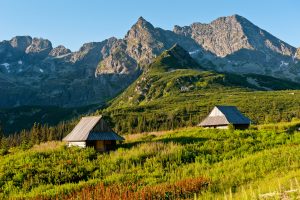 Day will be dedicated to the awe-inspiring Tatra mountains, the most revered mountain range in Poland. In Zakopane, the home of the Polish Tatras, you’ll jump on the railcar and take a trip to the top of Gubalowka Hill to admire a 360° view of the city and the surrounding mountain range. Then, while strolling along Krupowki Street – one of Poland’s most popular shopping promenades – you can enjoy the very best of the local culture, from fashion and souvenirs to restaurants and local production. An absolute must is a taste of the pride of the region, Oscypek, a smoked cheese made from a mix of sheep and cow milk. The surrounding wooden chapels, houses and eateries are overflowing with charm and will no doubt capture your heart.
Return to Krakow in the early evening. 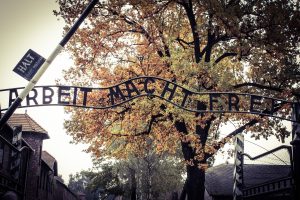 Morning:
On the way to Wroclaw, we will make a stop in the former Nazi Concentration and Extermination Camp Auschwitz-Birkenau. Here, an experienced museum guide will take you through the exhibitions in the remaining prison blocks and show you the ruins of gas chambers and crematoriums. After a short break, you’ll arrive at Birkenau/Auschwitz II with prisoners’ barracks, unloading ramp and ruins of gas chambers and crematoria no. II & III.
Afternoon & evening:
Arrive in Wroclaw in the late afternoon. Free evening. 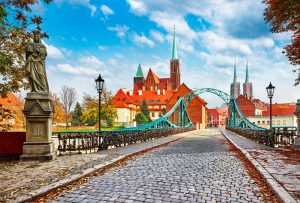 Morning:
Wroclaw (pronounced vrots-wav) is a gem of Poland that’s often overlooked. The thriving city is small enough to be explored but big enough to feel bustling. After breakfast, a local guide will take you through the Old Town’s narrow lanes, gas lamps and the infamous Cathedral Island. Next, you’ll stop to take in the University district and explore its historical academic headquarters, and other buildings left untouched for hundreds of years. You’ll then explore the town and the quaint shopping district en route to the magnificent main square, the city’s heart and soul.
Afternoon:
After a lunch break, head to Poznan.
Evening:
After a short break, you’ll explore the charming Poznan old town and it’s Renaissance town hall. Stroll through the charming streets on your way to St Stanislav’s Church, locally known as ‘fara’, and admire the rare Polish Baroque architecture, encrusted with gold, gems and other precious ornaments.
Overnight in Poznan. 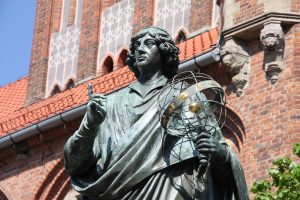 Morning:
Depart from Poznan and travel north to Gdansk with a short visits in the medieval pearl – Torun.
Torun is Poland’s best-kept secret. One of the most interesting and well-preserved cities in all of Europe, the town, it’s incredible history and bounty of surprises is easily explored on foot. No matter where you go, you’ll see some kind of decorative frieze, 200-year-old stained glass window, ruins of a medieval castle, and all of it brimming in history. You’ll get a taste of Torun’s favourite export, gingerbread, and explore the birthplace of the cities pride and joy, Nicolaus Copernicus – the astronomer who discovered that the Earth revolves around the sun.
Afternoon & evening:
After a city guided tour and short lunch break, transfer to Gdansk for the night. 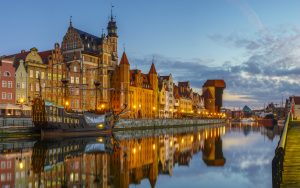 Morning:
Beginning in the Old Town of Poland’s biggest sea-side city, Gdansk, you’ll explore it’s rich maritime and trading history. The Amsterdam-esque slim red-brick houses, Hanseatic architecture and constant call of the sea make Gdansk a true sight to behold. Take in St Mary’s basilica, the largest Gothic church in Poland, the Neptune Fountain and Artus Court, the most famous symbols of the city. Afterwards, you’ll be travelling to Oliwa to visit stunning 13th-century cathedral, famous for it’s beautiful pipe organs.
Afternoon:
We stop at the biggest brick castle in Europe. Malbork (Marienburg) Castle was the home of the Order of the Teutonic Knights between 1309 and 1459. Today, the UNESCO World Heritage Site has been meticulously restored, with its great halls, giant towers and grand galleries restored to their former glory.
Evening:
Free time. Farewell dinner and last night in Gdansk.

After breakfast, it’s time to say goodbye to Gdansk and head back to Warsaw.
Arrive in the capital in the early evening.
If you prefer to stay longer in Gdansk and visit the Polish seaside, it’s possible to leave the group and not return to Warsaw. We will be glad to assist you with further arrangements.

Marszałkowska 99a
Hotel Metropol *** is situated opposite the Palace of Culture and Science, just a few steps from the Centrum metro station, offering excellent connections with all parts of Warsaw. It offers 210 spacious, elegant rooms eqipped with a satellite TV, free Wi-Fi access and a comfortable work area. The windows overlook the centre of Warsaw. There are also rooms with disabled access and rooms for smokers available on special request.
Day 3, Day 4, Day 5

31-033 Krakow, Westerplatte 15
Hotel Wyspianski *** is located in the city center, not far from the Main Market Square, 10 minutes away from the railway stadion and 20 minutes from beautiful, historic Jewish district – Kazimierz. Situated in building from socialism realism period, is completely modernized and and adapted for modern tastes. The hotel has 231 rooms on 4 storeys. All rooms have TV, telephones, Internet connection, private bathrooms and hair-driers. You will find there a special facilities for disabled persons - driveways, elevators, ramps and specially adjusted rooms. The hotel restaurant serves Polish and international cuisine. You will also find there a bar and gallery with souvenirs.
Day 6

50-266 Wroclaw, Wyspa Slodowa 10
Elegant, intimate hotel located in the Ostrow Tumski, the oldest and recognized as the most beautiful part of Wroclaw, near the city center. The hotel has 57 rooms with single and double rooms, family rooms and suites. All rooms have high speed Internet access. In the groundfloor there is a restaurant Karczma Młynska with its rustical arrangement, has a friendly and homely interior that brings to mind the atmosphere of the old inn or tavern. The restaurant serves traditional Polish cuisine with elements of European cuisine. In the summer on the banks of the Odra River there is also a summer terrace overlooking the Ostrow Tumski.
Day 7

61-807 Poznan, Sw. Marcin 40
The Altus Hotel is a 3-star hotel located in one of the most characteristic buildings in Poznan, Alfa. In each of the 109 comfortable rooms, wireless internet is available, as well as tea and coffee making facilities, mineral water, ironing board, iron and safety deposit box. The hotel also has a fitness center that will keep you physically fit even during your vacation or business trip. The hotel has an inviting aromatic restaurant and offers a wide range of drinks at the lobby bar.
Day 8, Day 9

80-834 Gdansk, Sw. Ducha 2
In the heart of the historic city of Gdansk, in the immediate vicinity of the Wybrzeże Theater and the unique monument of the Great Armory, is located the 3* Wolne Miasto hotel. In restored tenement houses offers 62 rooms of various standard. All rooms are spacious and elegantly furnished, and each has its own name taken from Gdansk historical streets and monuments. The rooms have a fully equipped marble bathroom, safe and flat-screen TV. Deluxe category rooms are additionally equipped with the minibar also tea and coffee making facilities. The accommodation offer of the Wolne Miasto Hotel is enriched in two-floor LUX Apartment with sauna and jacuzzi. In the hotel's main lobby, since 2006 is located Zeppelin Restaurant, which specializes in traditional Polish cuisine. Every morning, the Zeppelin Restaurant serves a varied breakfast buffet.

The Essence of Poland
10 Days
Departures from: