Boleslawiec ranks among the most scenic towns of the Lower Silesia region. It is important as a dynamic centre for industry and local services. Although the town is welcoming all year round, the best time to pay a visit is at the end of May when they hold the Festival of Boleslawiec. This incorporates a number of concerts, cabarets, exhibitions as well as sports events. In addition, Boleslawiec prides itself on its handmade pottery.

The focal point of Boleslawiec is the Old Town, where you can find rows of ancient tenements built in both the Baroque and Renaissance styles. One should not miss the building of the town hall, which was reconstructed in 1522 after it was severely damaged. It later underwent numerous alterations and its present shape dates from 1776.

Another building worthy of mention is the 15th century Church of the Assumption of the Virgin Mary, decorated with Baroque sculptures. The interior of the church follows the design of Italian-born painter and sculptor Giulio Simonetti. 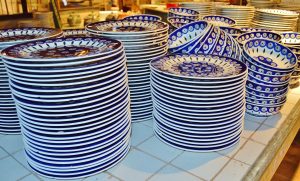 Since time immemorial, Boleslawiec has produced its famous handmade pottery, decorated employing a special hand-stamping technique. Each ceramic vessel is produced of white clay and embellished with lead-free glazes. The Boleslawiec Ceramic Holiday takes place during the second to last weekend of August, organised for the purpose of presenting and selling ceramic merchandise and building materials at the city marketplace. It includes a range of events, such as ceramic and sculpture workshops organized by the Union of Polish Artists. Stores selling these lovely ceramics can be found everywhere, and you are bound to find the one dish that suits your fancy. What makes pottery from Boleslawiec unique is that it is produced by people who put passion and enthusiasm into their work.

The small town of Boleslawiec is situated in the south-western part of Poland and the north-western part of the Lower Silesia region. It is located just 40 km from the Polish-German border (in Gorlitz), 250 km from Prague and 570 km from Warsaw, at the junction of several important communication routes. From Boleslawiec one can easily reach Wroclaw – one of the most interesting polish cities.

Lying on the River Bobr, Boleslawiec covers a total area of 22.81 km2. The town is located at a range of altitudes from 170 m above sea level at the bottom of the river valley to 240 m at the southern end of the town. To the north of Boleslawiec you can find some of the relaxing lower Silesian forests, and it is easy to get to some of the well-known resorts of the Karkonosze and Izerskie Mountains.

The origins of Boleslawiec date back to 1202, in which year a tribe named the Bobrzanians (meaning ‘beavers’) founded a settlement on the banks of a river having numerous beavers (the River Bobr). The Bobrzanians broke off from a larger group known as the Lechicki, a parent-tribe to some minor groups that over time would join to become Poles. The year 1202 also saw the first mention of the town in historic sources, meaning that it was one of the earliest settlements in the territory of today’s Poland.

In 1392 Boleslawiec became an area belonging to the Bohemian kingdom, and then the Hussite Wars in 1492 brought about the destruction of the town. In 1526 the Habsburg Dynasty took over the Czech throne, including Boleslawiec, which was called Bunzlau at the time. In 1742 it came under the control of Prussia and only in 1945 was it awarded to Poland by the Potsdam Conference.

Would you like to visit Boleslawiec? Browse the catalog of Poland tours
Check our best tour
2023 dates available
Escorted Tours Poland