Modern Bydgoszcz is not only one of Poland’s most dynamic, business-oriented cities with its large inland port, but also has a long history dating back to the Middle Ages. Among the most impressive traces of its past, there is “Bydgoszcz Venice”, a picturesque neighbourhood resembling Italy, enthusiastically visited by tourists. There are also some attractive sites in the neighbourhood, including Torun, Biskupin and Bory Tucholskie National Park, to name just a few. Yet most of the city’s guests arrive in Bygdoszcz on business, especially during trade fairs. 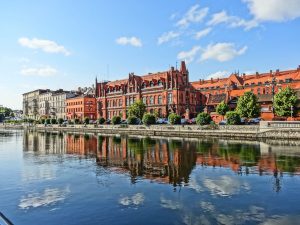 Bydgoszcz’s past and present has been influenced by its particularly favourable location, within close proximity to several rivers and the construction of Bydgoski Canal, thanks to which the city became one of the country’s major inland ports. From the 19th century on, it has also played a role as an important railway junction.

Bydgoszcz is first of all an industrial city specialising in wood products, textiles, metal goods and chemicals, but the service and trade sectors are also intensely developing. Having lured several serious foreign investors like Coca-Cola, AT&T, Samsung and Unilever, it grew into a major economic centre of north-central Poland.

The city itself has around 357,000 inhabitants, but is sometimes regarded as a metroplex together with Torun, which is only 45 km from Bydgoszcz (the total number of inhabitants is over 600,000). Both cities are the capitals of the Kuyavian-Pomeranian province, sharing between themselves the main institutions.

Bydgoszcz takes pride in the local Philharmonic, an institution recognised all over the world for its long traditions and a spacious concert hall providing excellent acoustics. Another famous musical site is Mozg (lit. Brain), the club known as the cradle of Polish yass – contemporary trend in jazz music.

Although Bydgoszcz is not a tourist destination, there are several interesting monuments, like Bydgoszcz Venice with its picturesque granaries and bridges. Bydgoszcz’s surroundings can be a great place to visit, and especially worth attention are Bory Tucholskie National Park, Lake Koronowski and the historical sights of Ostromecko, Lubostron, Biskupin and Torun. 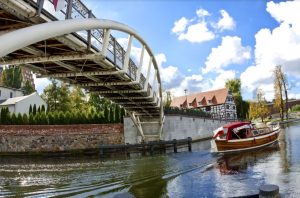 The most characteristic feature of Bydgoszcz’s landscape is several rivers which cross or border the city. To be precise, it is situated on the Brda river, close to its confluence with the Vistula, and on the Bydgoszcz Canal, which links the Brda and nearby Notec. This system of rivers is part of the Vistula-Odra waterway.

The area of Bydgoszcz and its surroundings is diverse, since the city is located on the border of several geographical areas, like Torun Dale, Notec Valley, Brda Valley, Swiecko Upland and Chelminskie Lakeland. The neighbourhood of Bydgoszcz is woody, dominated by pine forests.

According to legend, the city was founded by two brothers, Byd and Gost, who wandered from southern Poland towards the north looking for the best possible location for their town. Eventually, they found an ideal place, with a river, a ford, some hills nearby and roads running to all four sides of the world.

Originally, the town was a stronghold defending the borderline of Masovian Duchy, first from pagan Prussians and later from Teutonic Knights (who had their capital in Malbork castle). In the 13th century, Bydgoszcz was conquered by the Order, but in the following century it was returned to Poland and granted municipal rights by King Casimir the Great.

Soon, the construction of the castle at the bank of Brda River started. From the 15th century on, Bydgoszcz dynamically developed, extending its area and absorbing the neighbouring villages. Several granaries that can still be seen in Bydgoszcz are the traces of that great commercial prosperity. 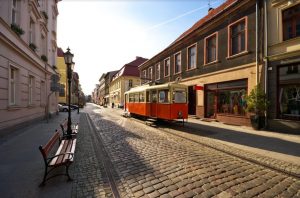 Bad times came with the Swedish attacks in the mid-17th century. The castle was destroyed, never to be rebuilt. In 1772, as a result of the first partition of Poland, Bydgoszcz was incorporated by Prussia and renamed Bromberg. It was the Prussians who constructed the Bydgoszcz Canal at the end of the 18th century, making Bydgoszcz an important inland port and boosting its development as a place of trade.

After a short period within the borders of Duchy of Warsaw, established by Napoleon in 1807, the city was returned to Prussia in 1815. The 19th century saw not only a strong Germanisation of the citizens, but also the growing importance of Bromberg on the economic map of Prussia. In 1851, it was connected directly with Berlin by railway.

Bydgoszcz reappeared within the borders of Poland after World War I and the Greater Poland Uprising, in which the locals took an active part. Twenty years later, German troops entered the city, their pretext being the Bromberg Bloody Sunday incident, a conflict in Bydgoszcz reputedly started by Poles.

The local inhabitants seriously suffered during World War II, and about one-fourth of them were killed. In 1945, the Red Army liberated the city. Since then, it has returned to normal life, constantly developing and beautifying itself.

Would you like to visit Bydgoszcz? Browse the catalog of Poland tours
Check our best tour
2023 dates available
Escorted Tours Poland