Duszniki-Zdroj has everything that you would expect from an old, stylish spa town: a variety of hotels and eating places, health treatments, beauty services, charming architecture and beautiful natural surroundings. Each year in August, the International Chopin Festival attracts large crowds of lovers of classical music. Visitors can also tour the unique Museum of the Paper Industry, located in one of the most precious industrial edifices in the country. 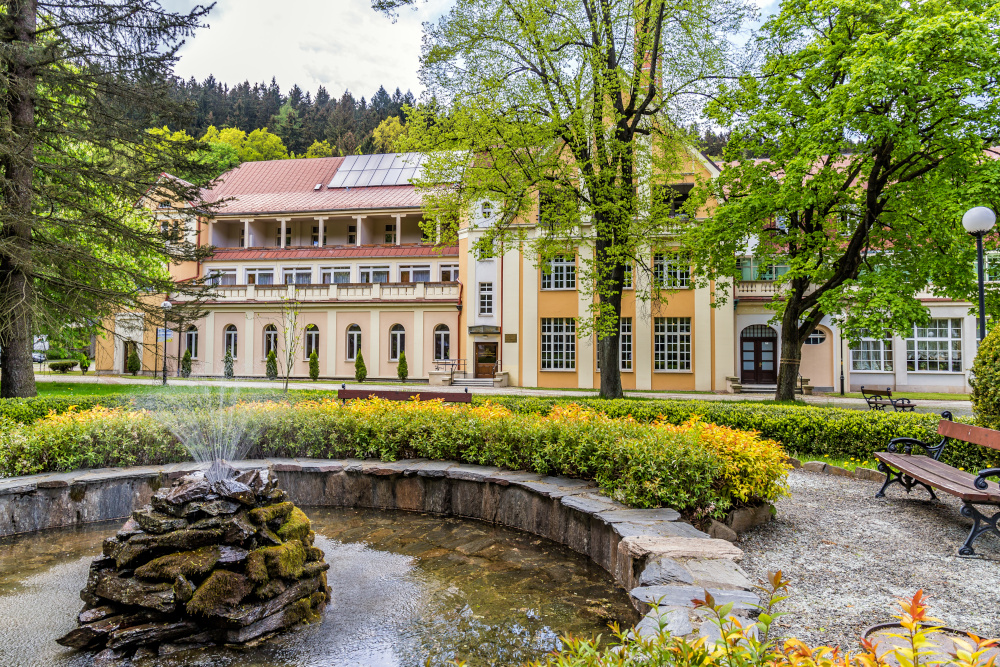 On the market place in Duszniki-Zdroj, the townhouses display a blend of Renaissance and Baroque styles. A descriptive plaque marks one very special house, where Chopin stayed in the year 1826. The International Chopin Festival is organized to commemorate the concerts that the 16-year-old composer performed while convalescing in Duszniki.

Whereas the exterior of the early 18th century Church of Saints Peter and Paul may appear unimposing, you should nevertheless step inside to take a look at two amazingly ornamented pulpits. One of them is in the shape of a whale, whose gaping maw forms the preaching platform. Such a stylistic reference to the Jonah story can be seen in other Polish churches, though not commonly.

On the same street where the church is located (Klodzka Street), you can find the Museum of the Paper Industry, occupying an impressive paper mill that dates from the beginning of the 17th century. Considered the greatest peculiarity of Duszniki, the mill has a half-timbered, sweeping mansard roof and novel domed entrance turret. The museum traces the history of paper making through the centuries and for a small, additional fee offers you a chance to press your own carpet-thick sheets of paper to take away.

At a distance of 109 km from Wroclaw and 25 km from Klodzko, the town of Duszniki-Zdroj lies on Bystrzyca Dusznicka River and its tributaries, the Podgorna and Jastrzebiak with Bramecka Woda. From north and west the town borders with the Lewin Klodzki community and from east-north from Szczytna community. The southern and western borders of Duszniki constitute the state border with the Czech Republic.

The mountain slopes where the town centre and the spa buildings are situated rise into abrupt, arched hills, ranging in height from 560 to 775 m above sea level. These hills are part of the Orlickie and Bystrzyckie Mountains.

The earliest reference to a settlement on the Bystrzyca Dusznicka River appears in documents from 1324. It obtained town rights in the 14th century and developed quickly owing to, among other factors, its advantageous situation on a trade route linking Silesia with the Czech Republic.

At the turn of the 10th century a wooden stronghold was constructed on the Gomola hill, later replaced by a stone castle, which served as the seat of the owners of the Homole feudal estate – the Panowic family. Their estate consisted of two towns, Duszniki and Lewin, as well as twenty-one villages.

During the course of the religious wars, the castle was captured by Hussites. After it had been abandoned in 1560, the construction fell into ruin. Duszniki-Zdroj remained a private property until 1595, the year when the Homole dominion was ended.

The mid-14th century saw the development of metallurgical industries in Duszniki. Before long, however, the seams of the ore the industry relied upon were exhausted and mining ceased, but metallurgy returned to the town more than four centuries later.

In the early 19th century a big ironworks owned by the Mendelssohn family was established in the Strazyska Valley. As a young composer, Feliks Mendelssohn-Bartholdy stayed in his uncle and aunt’s estate in 1823. At the close of the 16th century, trade, the weaving and paper crafts were flourishing, securing the town’s prosperity. Already by 1562 a paper mill was operating in Duszniki.

Then, the Thirty Years’ War put an end to the boom time. The town only began to prosper again in the second half of the 17th century. Though the first accounts of healing waters go back to the 15th century, it was not until around 1769 that the first examinations of the mineral springs were undertaken, a year marking the beginning of the town’s spectacular growth as a spa. By the outset of the 19th century, Duszniki had made a name for itself throughout almost all of Europe. The number of tourists and patients increased even more in 1905, with the construction of a railway line to Kudowa-Zdroj and of a scenic road from Duszniki to Polanica-Zdroj through the Piekielna Valley.

Duszniki-Zdroj received a number of eminent visitors, many of whom produced engaging descriptions and pictures of the old spa. Following his abdication on 17 August 1669, King Jan Kazimierz spent some time at the ‘Under the Black Bear’ inn before continuing on his way to France. Fryderyk Chopin with his mother and sisters arrived in Duszniki on 3 August 1826.

Would you like to visit Duszniki-Zdrój? Browse the catalog of Poland tours
Check our best tour
2023 dates available
Escorted Tours Poland