This cheerful maritime city owes its present grandeur to a thousand year of Polish-German history, with a significant period when the town was a key member of the Hanseatic League. Reflecting those times is the exclusive architecture of the Old Town, including the largest brick Gothic church in the world. Home of Lech Walesa, in 1980 it witnessed the birth of the Solidarity movement, bringing the end of Communism in Eastern Europe. 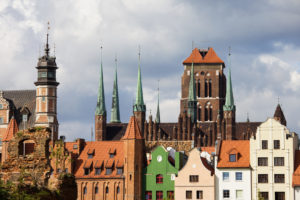 Old Town architecture with Church of the Blessed Virgin Mary (Polish: Bazylika Mariacka) in the background in Gdansk (Danzig), Poland

Situated on the coast of the Baltic Sea, Gdansk is the capital city of Pomeranian Voivodship. Together with two other cities, Sopot and Gdynia, it forms a conurbation known as the Tricity (by the way, check our Full Day Tricity Tour) with a total population of 750,000 (Gdansk itself has 456,000 inhabitants). While Gdynia serves mainly as a port and Sopot as a seaside resort, Gdansk is popular among visitors with its thousand-year history and impressive architecture.

Its Old Town attracts almost as many people as that of Krakow or Warsaw. In the past the city enjoyed a high degree of autonomy, which together with its participation in Hanseatic League, led to great prosperity. During its Golden Age, the turnover of Gdansk was bigger than that of London’s East India Company. Later periods in Gdansk’s history were complicated and sometimes even dramatic.

At present this maritime capital of Poland is an important cultural and academic centre. The economy is developing quickly and moving into new fields: the traditional shipping and amber trade is being joined by the petrochemical, electronic and telecommunication industries. The seaport and international airport make the city a significant transport hub.

Gdansk is situated on the coast of the Gdansk Bay, a part of the Baltic Sea enclosed in the north by the Hel peninsula. While the Vistula River has no distinct delta, it has formed several branches reaching the sea. One of them is the Motlawa, upon which the city is located. The granaries, houses, cranes and hotels on the islands of the Motlawa make it a very picturesque place to visit.

Gdansk has close links with Sopot (a popular spa resort) and Gdynia (an important seaport), and together they form a conurbation known as the Tricity, surrounded by the Tricity Landscape Park. All three lie in the Pomerania region, an attractive summer holiday destination where visitors from both Poland and abroad people the beaches in summer. Pomerania is marked by its small sandy hills wooded with pines, while Gdansk itself lies on a coastal plain. The Kaszuby region (Kashubia) is not far to the south, noted for its specific folk culture and its own language.

Gdansk’s past has several characteristic features: a long tradition of being a free city, the multinational mix of Polish and German cultures and close relations with Western Europe as one of the main ports of the Baltic region. The first records of this town date back to 997, when St. Adalbert, the bishop of Prague, visited it as part of his Christian mission in Pomerania. Gdansk, originally ruled by the dukes of Pomerania, was soon settled by Germans. From the 14th the town was occupied by the Teutonic Knights (with the capital on the Malbork Castle), who turned it into a major trade centre, renamed Danzig.

The real prosperity of Gdansk dates from 1361, when it joined the Hanseatic League, a mercantile organisation that controlled the whole area of the North and Baltic Sea. The favourable position on the route from Krakow to the sea enabled the rapid development of the city, making it one of the most powerful Hanseatic centres. From here grain and wood were exported to other parts of Europe. After Poland defeated the Teutonic Knights in the 15th century, Gdansk became Polish once more. It enjoyed a remarkable degree of political independence and many privileges to support its economic growth. It attracted many foreigners, including merchants and the refugees enchanted by its religious tolerance (a large Scottish community arrived in Gdansk during this period). The Golden Age of the city continued into the 17th century.

In 1793 Gdansk became part of Prussia for over a hundred years, with the short break in 1807-1815 when the Free City of Danzig was founded during the Napoleonic era. In the 19th century it became further Germanised, and the economy and industry continued to grow. After World War I, under the Treaty of Versailles, Gdansk became a Free City again, this time under the protection of the League of Nations.

During the 1930s it witnessed the growing influence of Nazism, described by Nobel Prize winner Gunter Grass in his novel The Tin Drum. The Nazis demanded greater control over Pomerania and Gdansk, using it as a pretext for starting World War II: in 1939 the Germans attacked Westerplatte, a Polish military position near Gdansk. After six years of German occupation, the Red Army arrived in 1945, with Gdansk suffering great destruction during the resulting battle. The surviving Germans began to leave the city, being replaced by Poles predominantly from Wilno (now Vilnius, Lithuania) after the latter became part of the Soviet Union. The Old Town was rebuilt in the 1950s and 1960s.

1970 was marked by riots in the streets of Gdansk, starting with the shipyard workers protesting against government policy. The demonstrations led to the resignation of the communist leader, Wladyslaw Gomulka, but the price was high: the army killed over 80 people. The strikes were repeated in 1976 and again in 1980, when the workers of the shipyard founded the Solidarity trade union, the first legal opposition to the communist rule. It was the first step to the independence of Poland and to the end of Communism in Central and Eastern Europe.

Would you like to visit Gdansk? Browse the catalog of Poland tours
Check our best tour
Escorted Tours Poland