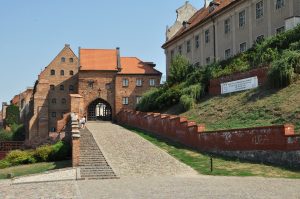 Grudziadz is often overlooked, but its interesting Old Town and good location makes it worth pausing for. Why not drop in while heading to Gdansk, Torun, Poznan or Masuria? Grudziadz has a unique complex of ancient granaries, picturesquely located along the bank of the Vistula River and once used to both serve as grain storage space and protect the town from invaders. The view of the granaries from the opposite bank while driving the road from Chelmno cannot be compared with any other in Poland.

Grudziadz is a large industrial town with a population exceeding 100,000, is ranked among the major urban areas of the Kuyavian-Pommeranian Voivodship as well as being an important local centre of business, education and culture. The town’s potential for tourism is evaluated as high due to two main factors that have contributed towards its development.

First of all, there is a range of interesting sights that any visitor can explore. Apart from the imposing buttressed granaries along the river, Grudziadz’s Old Town offers many more places to see and things to do. Why not start from the regional museum of contemporary art with its temporary exhibitions and archaeological section, all housed in a former Benedictine convent? In the vicinity is the Gothic red-brick parish church of St. Nicolas and the Baroque Jesuit Church, while the nearby college, formerly run by Jesuits, has been turned into a town hall. There are plenty of other attractions, including a planetarium and the remnants of ancient ramparts. 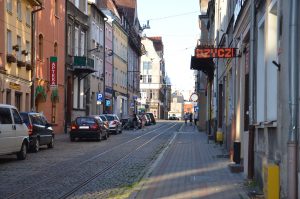 Secondly, thanks to the great roads in the region, Grudziadz is easily accessible from other major cities and regions in Poland. Running through the town is the road from Germany to Warmia and Masuria, and the international E-75 route passes by only some 5 km away. Moreover, there are more great possibilities for the future of the town since a new highway to Gdansk and a ring road are under construction.

Grudziadz is situated in northern Poland, close to the Tricity (about 100 km away), Torun and Bydgoszcz (each about 60-70 km). Administratively it belongs to Kuyavian-Pomeranian Voivodship.

The town is located on the right bank of the Lower Vistula River, in the Grudziadz valley. Within the city borders are three lakes, the biggest one being Lake Wielkie Rudnickie.

The first records about the town of Grudziadz come from 1065, but there were earlier Piast settlements on this site. Originally it served as a border stronghold against the Prussians and was a centre of christianisation. As early as in 1291 Grudziadz acquired city rights and soon was surrounded by a double wall with 10 towers, 4 gates and a moat. In the first half of the 13th century it fell under the rule of the Teutonic Knights, but then in the 15th century it was returned to the Polish Crown. After the first Partition of Poland the town was a part of Prussia. During the Napoleonic Wars, attacked by French army, it was the only Prussian fortress that managed to endure the siege.

The rapid development and industrialisation of Grudziadz began with the construction of a bridge across the Vistula River at the end of the 19th century. After World War I the town was returned to Poland, and grew to become the true economic capital of the Pomeranian Voivodship. During the Nazi occupation (1939-1945) of the town, renamed Graudenz, it was turned into a fortress. After the significant amount of damage the town received during the battles between the German and Soviet forces, the town was restored and it now attracts tourists with its many sights and friendly atmosphere.

Would you like to visit Grudziadz? Browse the catalog of Poland tours
Check our best tour
2023 dates available
Escorted Tours Poland