Hajnowka is a charming little town in north-eastern Poland, situated in the western periphery of the Bialowieza Primaeval Forest – a land almost untouched by human hand. The national park of Bialowieza is listed by UNESCO as a World Biosphere Reserve. Hajnowka attracts visitors with its multinational cultural influences (Belorussian, Russian and Ukrainian), annual International Festival of Orthodox Music and the diversity of the Bialowieza Forest wildlife. 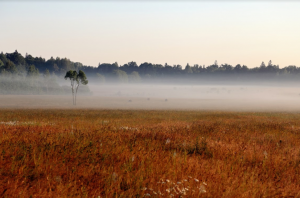 From this little town it is only a step to the most famous and oldest National Park in Poland, Bialowieza Forest. In this natural environment you can meet European bison, wolves, wild boar, Polish tarpan ponies, elk, deer, and a hybrid of European bison and farm cattle called “zubr”. On the beautiful thematic trails you have the opportunity to admire this protected area for rare animals, birds and trees – the natural and magic beauty of this place is the best recommendation for anyone visiting the park. There is also possibility to cycle along several routes through the Protection Zone, which is an excellent way to relax to the rhythm of nature.

Not only is the forest attractive, Hajnowka itself is also very inviting too. There are several places worth visiting in the centre of the town – the Orthodox church from 19th century, the museum of blacksmithing and locksmithing, the narrow-gauge railway heritage park, the old Orthodox cemetery and the museum of Belorussian culture.

Whatever the season, there is always a choice of events taking place in Hajnowka – The half-distance Marathon of Hajnowka-Bialowieza in April, the International Festival of Orthodox Church Music and the Polish Beach Volleyball Championship in May, the All-Polish Outdoor Scenery Furniture in August, and the All-Polish Students of Artistic Universities Outdoor Scenery in September. Don’t forget that you can go for a ride on the narrow-gauge railway, which runs all year round between Hajnowka, Topilo, Lipiny and Postolowo.

Hajnowka is situated in north-eastern Poland, near the Bialowieza National Park. It lies about 50 km south of Bialystok, 115 km east of Lomza and 200 of Warsaw. Not far from the town, in Bialowieza, you will find a pedestrian border crossing to Belarus. In Polowce you can cross the border by car.

Hajnowka owes its beneficial climate to the neighbouring and extensive forest areas, and the generally clean environment.

Hajnowka as a settlement has been known since the 16th century and presumably took its name after Heyna, a local forest ward. The village began to develop when the forest became a royal property. Hajnowka’s history is closely linked to other places in the region, such as Bialowieza.

In the 18th century all this area became part of the Russian territory. The beginning of the 19th century brought the railway to Hajnowka (between Bielsk Podlaski and Wolkowysk) and a new road was constructed between Bialowieza and Bielsk Podlaski. During World War I the town was occupied by Germans, who built two sawmills, a laundry, a casino, a cinema, a dry wood distillery, and the still existing engine-house for the narrow-gauge railway.

Before World War II, Hajnowka had become a part of Poland, but in the first years of the war it fell first to Soviet Russia and then to Nazi Germany. Numerous battles were fought in the area, the Jews were extermination, while severe bombing resulted in a weakening of the position of Hajnowka. The town today owes much to the people who settled there after the war, and who started to redevelop it to an extent that resulted in Hajnowka gaining city rights in the 1950s.

Would you like to visit Hajnowka? Browse the catalog of Poland tours
Check our best tour
2023 dates available
Escorted Tours Poland