Sitting in the shadow of Mt Sniezka (1603 m), the highest summit in the Sudetes, Karpacz is one of the most popular and entertaining mountain holiday resorts in Poland. Listed among the “winter capitals of Poland”, it draws more visitors than it has permanent inhabitants and is especially attractive for outdoor types – not only skiers, but also hikers. Another asset of Karpacz is its proximity to Karkonosze National Park, which has plenty of hiking areas to explore. 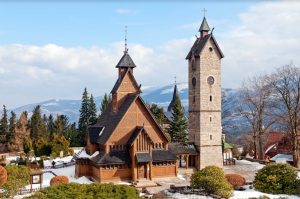 This little town, or rather large village, lacks any central area. Situated along a 10 km long winding road, it consists of two parts: Karpacz Dolny (Lower Karpacz) where most hotels, pensions and eating venues can be found, and Karpacz Gorny (Upper Karpacz), simply a collection of holiday homes.

When in Karpacz, it might be an idea to pay a visit to Wroclaw. However, the real treat is the unique 13th century Lutheran Wang Chapel, to be found half way between the town and Mt Sniezka. Interestingly, not a single nail was used during the construction of this wooden structure.

The town makes a perfect base for hiking excursions to Karkonosze National Park, just to the south of Karpacz. From here there are six different trails leading to Mt Sniezka, the most obvious aim for the majority of walkers, as well as a number of ski lifts and a chairlift.

Apart from beautiful lakes, waterfalls and rock formations, the distinctive feature of the Karkonosze landscape include the kotly (cirques) – enormous cavities carved by glaciers during the ice age and edged with sheer rocks. There are half a dozen of them on the Polish side of the Sudetes. 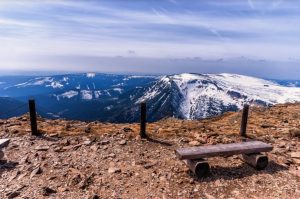 Karpacz, a town on Lomnica River in the Lower Silesian voivodship, has an estimated permanent population of 6000. It is situated at an altitude of 480-885 metres above sea level, and only 15 km south of Jelenia Gora. Within the town’s limits is the highest part of the Karkonosze, with Mt Sniezka rising to 1603 metres (the Karkonosze are the highest range of the Sudetes Mountains).

The climate in Karpacz is the same as that of the Karkonosze Mountains – harsh and characterised by severe rainfall (snowfall in winter). Those planning a trip here should be mindful of the very changeable weather that the area is prone to: powerful winds and fogs may occur at any time of the year.

The origins of Karpacz go back to the end of the 14th century, for it was then that the iron ore, silver and gold began to be mined in the Sowia Valley. Archaeological research allows us to suppose that prior to that the area was penetrated by those combing the mountains in search of precious jewels. In the vicinity, on the slope of Mt Grabowiec, there was a place of pagan worship. Conceivably other such centres were located within today’s Karpacz. It is possible that Mt Sniezka, the highest peak of the Sudetes, was believed to be sacred, though this is only an unproved supposition.

On the site of today’s Karpacz, settlements based on metallurgy developed dynamically, with both smelters and the wood-cutters who produced charcoal from the wood of the surrounding forests. As recently as a century ago, Karpacz was still a mining centre of considerable size.

The 17th century St Wawrzyniec chapel was built on Mt Sniezka. Besides the inhabitants of the nearby settlements, over time more and more pilgrims from territories further away would come to the chapel to pray. Czech Protestants escaping persecution during the Thirty Year’s War stayed on permanently, thus giving rise to dissenters settling in the area. Czechs contributed to the creation and development of the highly appreciated centre of mountain folk medicine.

The rapid growth of tourism did not begin until after 1895, when Karpacz got a railway connection with Jelenia Gora. At the end of the 19th century, the first winter sports enthusiasts arrived in Karpacz. Building the chairlift to Mt Kopa (1375 m) further advanced the region’s popularity among skiers.

In 1844 the unique mediaeval Wang chapel was brought from Norway and rebuilt in Upper Karpacz. Until the outbreak of World War II, Protestants constituted the majority of the inhabitants.

Since 1970s Karpacz has no longer been a collection of separate settlements scattered across the hills. Most buildings are now situated along the main artery, ul. Konstytucji 3 Maja. Karpacz was granted a town charter in 1960.

Would you like to visit Karpacz? Browse the catalog of Poland tours
Check our best tour
2023 dates available
Escorted Tours Poland