For centuries an important commercial centre, Poznan became known for the trade fairs that have taken place here since 1921. Now most people come to Poznan on business, but the history and architecture of the city are also good reasons to visit. Poznan is a cradle of the Polish nation and the second main centre of the first Polish state that emerged here in the Middle Ages. Now it captivates many people with its splendid Old Town. 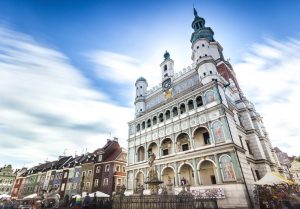 Poznan, with its 554,000 inhabitants, is one of the major cities of Poland and the capital of Wielkopolska Voivodship (Greater Poland). It has always been an important trade centre (rated second after Warsaw) and still maintains a thriving mercantile tradition. The most notable events of the Poznan year are the International Trade Fairs, held since 1925 and comprising over 40 specialised exhibitions. Poznan is not only a business and industrial centre; it has a significant historical importance. Worth visiting are the Renaissance Town Hall, the Cathedral Island and the stern Prussian castle. Although the city was largely destroyed during World War II, it has been restored thoroughly and now you may fully enjoy its charming Old Town and some of its fine museums and restaurants.

Poznan is a good base for sightseeing in Greater Poland, and you will find many outstanding places to visit in nearby towns. Among these are Gniezno, the first capital of Poland, Kornik with its magnificent castle, Rogalin where the oldest oaks in Poland grow and Wolsztyn with its steam railway. Poznan gives you the opportunity relax in one of its numerous parks or near the artificial Malta Lake, a popular recreation area of Poznan inhabitants and tourists. 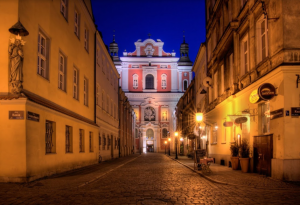 The undulating surroundings of Poznan were formed by glaciation. The highest point within the city area is Moraska Hill (154 m above sea level). The nearby area, known as the Morasko Meteor Reserve, is famous for the seven craters formed by a meteor that fell there some 5,000 years ago.

While the Warta River is the main river in the city, there are also smaller tributaries like the Wierzbak and Bogdanka. The oldest part of the city is situated on an island called “Ostrow Tumski” (the Cathedral Island), while the downtown and the Old Town lie on the left bank of the river. Poznan is the capital of Greater Poland, a western voivodship. In the region you may find national and landscape parks, lakes and many other attractions.

The founding of Poznan is closely connected with the beginnings of the Polish state and nation. The first Slavonic settlements in this area date back to the 9th century, when the castle was built on the Ostrow Tumski Island on the Warta River. Development of the town took place under Prince Mieszko and King Boleslaw the Brave, the first Polish rulers, and 968 saw a bishopric being established there. In those times Poznan was one of the two crucial centres of the Polish state (the other one was Poland’s first capital Gniezno).

After a Bohemian prince destroyed both towns, the capital was moved to Krakow. Poznan still played an important role as the capital of the Greater Poland and the main bastion on the country’s western border. Situated on the European trade route, Poznan quickly developed. In the 13th century a new town centre was created on the left bank of the Warta River. Poznan flourished during the Renaissance period in both the economic and cultural sense. Two higher education institutions were founded in the 16th century: the Lubranski Academy and the Jesuits’ College. The rector of the latter, Jakub Wujek, was responsible for the first Polish translation of the Bible.

In the following centuries Poznan suffered from Swedish, Prussian and Russian invasions, which, along with fires and epidemics, caused much damage to the town. Eventually in 1793, after the second Partition of Poland, Poznan fell under Prussian rule, with a short break in 1807-1815 when it was a department of the Duchy of Warsaw, established by Napoleon.

The city experienced intense industrial growth and became an important military centre for Prussia, known as Festung Posen (Fortress Poznan). Although it was Germanised and colonised by Prussian settlers, an active Polish national movement resisted the state’s policy, especially in the second half of the 19th century.

In 1918 Poznan returned to Polish rule as a consequence of the Greater Poland Uprising against German rule. In the 1920s and 30s it continued to develop as an economic and educational centre, spreading onto the right bank of the Warta. The German occupation in 1939-1945 and the battle for the liberation of the city resulted in tremendous destruction, with about a half of the buildings being destroyed.

After the war Poznan remained within the Polish territory, which came into the Soviet sphere of influence. In 1956 massive strikes broke out in Poznan of workers dissatisfied with the economic situation. The spontaneous rebellion was crushed by the army at a cost of over 70 lives.

Would you like to visit Poznan? Browse the catalog of Poland tours
Check our best tour
2023 dates available
Escorted Tours Poland

Recommended tours while stay in Poznan