The azure lakes and the closeness of the Piska Forest, with its diversified flora and fauna, have helped Ruciane-Nida to develop into a bustling centre for recreation and water sports, one of the busiest in the Great Masurian Lake District. For many years now the town has been a mecca for sailors from all over the country and beyond. You will find several attractive sites within the vicinity, some of which can be reached on foot while others involve travelling by bus or train. However, the most popular mode of moving about is on water, by river or canal. 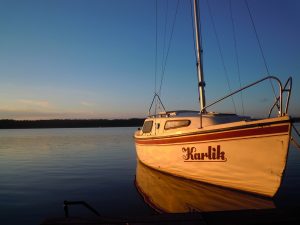 Visitors to Ruciane-Nida have a number of options when it comes to choosing a place to stay, depending on budget and preference. There are a number of holiday camps, hotels, guesthouses, B&Bs and campsites in the town. Worthy of note is the fact that the community of Ruciane-Nida has the largest tourist and leisure base in the north east of Poland. The town also offers a wide choice of taverns, bars and locally run pizzerias, perfect if you are in the mood for a tasty and yet inexpensive meal in a cosy environment.

A number of trails have been created through the scenic landscape, making the vicinity of Ruciane-Nida an ideal location for walking, cycling, kayaking and sailing. Many parts of the Piska Forest are easily accessible by bicycle, and you can experience the water trails on your own or take an enjoyable leisure cruise. The area is also home to several stud farms.

A major site to see is the forester’s lodge in Pranie, which is located about 5 km away from Ruciane-Nida. It once belonged to the Polish poet, Konstanty Ildefons Galczynski, and here he created some of his best-known works. In 1980 the lodge was turned into a museum in his memory, and now there are concerts and meetings with poetry held here every summer.

Ruciane-Nida is a town in the Suwalki province, located on the southern edge of the Land of the Great Masurian Lakes. From here it is 70 km to Elk, 90 km to Olsztyn and 210 km to Warsaw. Ruciane-Nida has a population of approximately 5,500 and covers an area of 17.7 km2.

The town is situated on the Mazurska Plain near two lakes, the Guzianka Wielka and the Nidzkie, both part of the Masurian Landscape Park. The latter lake is vast: it covers about 1020 ha and it has thirteen islands, and is surrounded on all sides by mixed coniferous and deciduous trees of the Piska Forest.

The woodlands regulate the local climate, which is dictated by a mixture of continental and oceanic influences, but as the former are more prevalent, the climate here is milder than might be expected of the area.

The first certain traces of settlers in what today is the town and community of Ruciane-Nida go back to the 2nd century A.D. At the time the area was inhabited by the tribe called the Galinds.

The Teutonic Knights came to settle here in the 13th century, after the conquests in the years 1253-1254. Soon afterwards, a policy of settlement was inaugurated that reached its peak after the Peace Treaty at Lake Melno was signed in 1422. The treaty defined the borders between the Teutonic Order, and the Polish and the Lithuanian states.

Following the Prussian Homage in 1525, the region of today’s Ruciane-Nida was incorporated into a secular Prussian state, which was a fief of Poland. The policy of settlement was still being pursued by the Prussian rulers, yet the area remained sparsely populated until the 18th century. This resulted primarily from Tatar and Lithuanian raids, as well as the natural calamities that frequently occurred here. Villages deriving their names from those of their founders began to dot the landscape from 1830. Hermitages and monasteries were built, as well as normal dwellings.

The village of Nida was established in 1699 on the site of a former fishing village and a mill located by the river Nidka. Its inhabitants lived on fishing as well as the production of pitch and wood coal. In Ruciane, on the other hand, the first manufacturing plants had been set up as early as the 14th century. A forester’s lodge and a small forest settlement existed there in the first half of the 19th century.

In the second half of the 19th century there was a real enhancement in local communication when, between 1866 and 1869, a road was built to link Ruciane with Pisz, and then in the years 1883-1885 a railway line was created between Olsztyn and Elk, with a station in Ruciane. Another big event in the life of Ruciane was the opening of a railway connection with Mragowo in 1898. At the dawn of the 19th century a waterway from Gizycko to Mikolajki, Ruciane and Pisz took shape, spurring the growth of tourism in Ruciane. After World War I Ruciane welcomed about 12,000 visitors annually, which made it one of the most important tourist resorts in the area of former East Prussia. The first mobile sawmill came into use in Wejsuny in the period after World War II, followed by the rebuilding of the sawmills in Ruciane and in Nida.

In the years 1949-1963, factories producing hardboards were located near Nida and began operations one after another, which was of great importance for the development of both Nida and Ruciane. It was only natural that in 1966 the two villages were joined into one town, called Ruciane-Nida.

Would you like to visit Ruciane-Nida? Browse the catalog of Poland tours
Check our best tour
2023 dates available
Escorted Tours Poland