Much of the appeal of Tarnow comes from the Galician atmosphere of the city, which has been preserved since the time of the imperial monarchy. The winding streets of the mediaeval town remain, as do fragments of the fortified walls as well as many Gothic and Renaissance buildings, all helping to create a magical atmosphere that can be experienced in no other place in the country. Tarnow is often dubbed the “Pearl of the Renaissance” by historians, and has several fascinating museums to boot. 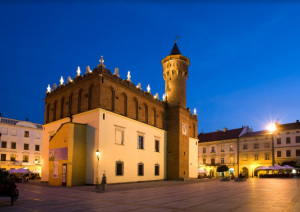 Although Tarnow underwent some tough times throughout the centuries, it at times appears that not much has changed since its early days. The most important part of this mediaeval-looking city is the Main Marketplace, lined with lavishly ornamented tenement houses, some of which still have Renaissance arcades. Wandering the streets of Tarnow gives one an intangible feeling, particularly when coming across the artistic treasures of the “Clerical Route”. Its chief masterpiece is the Cathedral Basilica where you can see splendid tombstones of the Tarnowscy and Ostrogscy dynasties. Nearby, the Diocesan Museum attracts visitors with its invaluable collection of sacral artefacts.

Make sure to visit the several museums located in the Renaissance Town Hall and the Arcade House close to the market square, as they all offer truly unusual collections. The exhibition of the Ethnographic Museum is devoted to the history and culture of Gypsies and is particularly worth seeing, being the only one of its kind in Europe.

Tarnow promotes itself as the birthplace of many prominent historical figures, mostly ardent patriots. Among them is the defender of Polish independence, General Jozef Bem, the charismatic peasant politician Wincenty Witos, and the commander of Westerplatte during September Campaign of 1939, Major Henryk Sucharski.

Tarnow is situated in the south-eastern part of the country (East Malopolska), 80 km to the east of Cracow, along an important communication route linking the south with the east. It has a population of more than 117,000.

Standing on the river Biala, Tarnow boasts the warmest climate in Poland. Here, they have an average annual temperature of 8.8 degrees C.

Tarnow’s origins date from 1330, for it was in that year that a local village called Tarnowiec acquired the status of a town. Just when and how Tarnowiec came into existence is shrouded in mystery. The medieval layout of the city – an oval centre with a large square in its middle – is still visible when you look at the map of Tarnow.

For a long time Tarnow was the private property of the affluent local Tarnowski family, and this continued until the 18th century. Under their auspices, in the Renaissance era the city became a trade centre on the busy route between Krakow and Kyiv and rose to its greatest prosperity as a centre of education within the Polish commonwealth when a branch of the Krakow Academy was set up here in the mid-1500s. In later years, wars and partitions ended this period of bloom.
Similar to other towns in the area, Tarnow was home to a massive Jewish population, which in the 19th century accounted for half the population of the city. Of 20,000 Jews inhabiting Tarnow in 1939 just a few outlived the holocaust. At present the city has one of the highest concentrations of Roma in the country.

Would you like to visit Tarnow? Browse the catalog of Poland tours
Check our best tour
2022 dates available
Escorted Tours Poland