Tczew is a seat of a county and commune in the Pomeranian Voivodeship, located approximately 40 km from Gdansk and 60 km from Gdynia. The town may boast of many interesting monuments and therefore it is of attraction to enthusiasts of sightseeing. It is also a good starting point to the voivodeship capital, Gdansk. 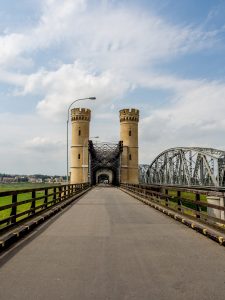 Tczew may boast of many monuments. The oldest and at the same time the most recommended to visit are: Parish Church of the Holy Cross with a Baroque interior from the 13th century, Post-Dominican Church of Saint Stanislaus Kostka from the 14th century, Dutch-type windmill from 1806 and Water Tower from 1905.
A special attraction of Tczew is bridges on the Vistula River. The road bridge was the first one to be constructed, between 1851 and 1857. At the time, with its 837 metres’ length, it was one of the longest bridges in the world. The other, railway bridge, was built between 1888 and 1890. The bridges are so interesting due to the used technical and constructional solutions. The American Engineering Association listed the bridges as international engineering landmark.

Tczew is a town and a seat of the county and commune in the Pomeranian Voivodeship. It is located by the Vistula, in Kociewie region, the second (apart from Kashubia) region of Pomerelia.
Tczew is an important transport junction. There are the country road no. 91 (Gdansk – Torun) and the voivodeship road no. 224 (Tczew – Wejherowo) crossing here and nearby A1 motorway and the country road no. 22 run.

The first records about Tczew are from 1198. A growing economic importance of the Vistula function and a few settlements that existed in the area of Tczew in the 12th-13th centuries were crucial when it came to the decision of the building of a castle here and moving the Duchy’s capital from Lubiszew to Tczew in 1252/1253. In 1260 Tczew obtained town rights, which boosted craft and trade development.
In 1308 Tczew was conquered by Teutonic Knights. They built a castle here, which was a seat of the Teutonic administrators. In 1410, after the Battle of Grunwald, Tczew was joined to the Prussian Confederation and 16 years later, as a result of the Second Peace of Thorn, it was rejoined to Poland.
In 1577 there was a great fire, which almost completely destroyed the town. Tczew suffered also during the Polish-Swedish Wars in the 17th century and the Great Northern War (1700-1721).
As a result of the first partition of Poland in 1772 the town was joined to Prussia and rejoined to Poland only after the WW1.
During the Interwar period, Tczew was famous for its maritime academy. It was opened in 1920 and six years later a port was founded. Golden years for Tczew port were 1926-1928, i.e. good economic times for Polish coal, which was caused by a long-term strike of English miners. After 1928 the local port unfortunately lost its importance.
In the Interwar period industry developed in Tczew. There were many factories and craft, trade and estate market developed. The church of St. Joseph and sports stadium were built and water distribution systems and public slaughterhouse were modernized.
The WW2 was not easy for Tczew. In the morning of 2 September 1939 Hitler’s troops entered the town and the German occupation of Poland began. It was the time of murders and repressions of Tczew inhabitants. There were camps for English and French prisoners of war as well as the labour camp for Poles in the town. Germans expelled Poles to the General Government and the Third Reich for the forced labour.
The German occupation of Poland ended on 12 March 1945, after a bloody fight in which more than 100 soldiers died. After the Second World War Tczew was one of the most destroyed towns in Pomerelia.

Would you like to visit Tczew? Browse the catalog of Poland tours
Check our best tour
2023 dates available
Escorted Tours Poland