Barcin is a town in the Kuyavian-Pomeranian Voivodeship, located 35 km from Bydgoszcz and 50 km from tourists attractions of Torun. The cities’ dwellers treat it a perfect destination for weekend getaways. While in here, tourists should go for a walk to Barcin’s old town and by the picturesque Notec and climb the mountain of St. Adalbert, from which they can admire a breathtaking view of the commune and river valley. 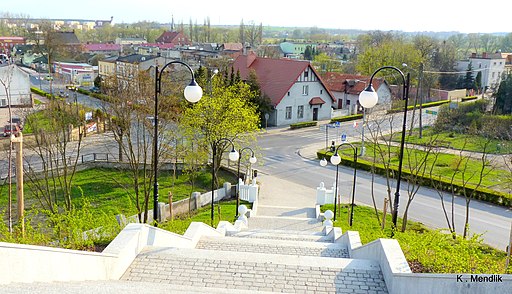 Barcin is a small, but interesting town. There are not many monuments here, but you ought to visit the church of St. Jacob from 1901 and a classicist manor from the 19th century. An interesting site is also the Mountain of St. Adalbert, from which tourists may admire the view of the commune and the Notec.
While in Barcin you should also go for a stroll by the Notec (the route was built in 2012 thanks to the European Union’s subsidies).
Barcin is also a great starting point to full-of-monuments Bydgoszcz (35 km).

Barcin is a town and seat of the commune in the Kuyavian-Pomeranian Voivodeship, in Znin County, by the Notec. The town is situated at the crossroads of routes no. 254 (Brzoza – Wylatowo), no. 251 (Kaliska – Inowroclaw) and local routes to Dabrowka Barcinska and Mamlicz.

The first records about Barcin are from 1390, but probably it existed much earlier. In 1472 Barcin obtained the privilege to organise fairs and in 1541 was given town rights. Until then it had been a settlement. In 1560 the town was a centre of the Unity of the Brethren, who ran a school here.
As a result of the First Partition of Poland, Barcin was annexed to Prussia and started to develop rapidly. The growth was strictly connected with the discovery and exploitation of limestone in neighbouring Bielawy in 1860.
On 4 January 1919 the Greater Poland Uprising broke out, as a result of which Barcin was rejoined to Poland.
During the Second World War, Barcin inhabitants were persecuted and victimized by Nazis. On 21 January 1945 the town was liberated.

Would you like to visit Barcin? Browse the catalog of Poland tours
Check our best tour
2023 dates available
Escorted Tours Poland