Besides its fame as a producer of high quality wooden floorboards, the little town of Barlinek is known for its picturesque location amongst green, hilly countryside in the north-west corner of Poland. It is surrounded by numerous lakes that are home to a variety of fish and thus making for wonderful fishing. The largest and most scenic of these lakes is Barlineckie Lake. 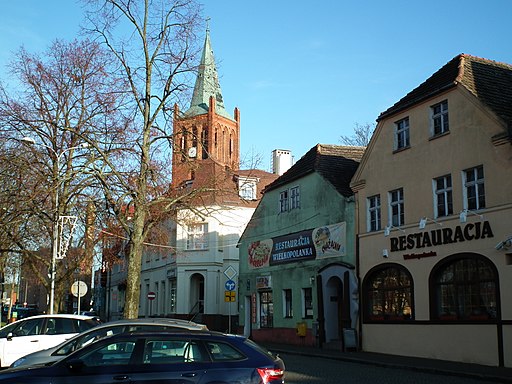 Barlinek is a typical tourist town, offering a number of hotels and pensions as well as excellent eating places serving specialities of traditional Polish cuisine. Most visitors are attracted here by the fresh air, unspoilt forests and countryside, but there is much more to the town than this. Many events are held in Barlinek regularly in the warm months of the year, including the Ceramic Fair on May 1; the election of the Queen of Barlinecka Primeval Forest during the Days of Barlinek in June; the National Sailing Regatta; the Theatre Summer in August and the Chess Festival named after Emanuel Lasker, who was born in Barlinek in 1868 and who later became world chess champion. In addition, Barlinek hosts angling competitions, not just in summer, but also throughout the year. Hunters will have an unforgettable experience while roaming the forests, and the plentiful game is bound to ensure a successful hunt.

One can also explore a number of great attractions in the vicinity of the town, such as the Barlinecko-Gorzowski Landscape Park; the Drawa National Park, ranking among the most beautiful and untouched spots in Poland; one of the few prehistoric megalithic chambered tombs and stone megaliths (near Przelewice); and the Slonsk Bird Reserve, a paradise for birdwatchers with some 245 bird species identified to date.

This little town is located 82 km from Szczecin (see also our tours in Szczecin) and 480 km west of Warsaw, in the southern part of the West Pomeranian Voivodship in Mysliborz County. Barlinek has approximately 14,000 inhabitants living on an area of just seventeen square kilometres.

Situated on the Plonia River and on the edge of the extensive Barlinecka Primeval Forest, the town is one of the ecologically cleanest in Poland. Covering an area of 272 ha, Barlineckie Lake is helped made attractive by its diverse shoreline, fours islands, numerous bays and peninsulas, as well as the surrounding steep hills that are reflected in the mirror-like water.

The town is mentioned for the first time in a location act from 25 January 1278, signed by the margraves Otto V and Albrecht III. This document authorised Henry Toyte to found a town, to be known as ‘Nova Berlyn’. In accordance with the 13th century architectural standards, ‘Nova Berlyn’ consisted of two main arteries, crossed by diagonal, narrow streets. The market place was laid out in the town’s centre, with a town hall built in its middle. To the east of the market place a church was erected, first referred to in chronicles from 1298. ‘Nova Berlyn’ was surrounded on all sides by a seven-meter-high defensive wall. The medieval arrangement of streets has been preserved to this day.

‘Nova Berlyn’ was located in the Neumark region, part of Brandenburg up to the first half of the 15th century when it was sold to the Teutonic Knights. They took over all the properties that brought any income, including the mills which were a common feature of the town and its surroundings at that time. When the war with the Teutonic Order was over, ‘Nova Berlyn’ became a Teutonic town and as such was plundered many times by Polish and Pomeranian armed forces.

In subsequent centuries, the town fell victim to numerous fires and raids. However, starting from the second half of the 19th century it began to develop. The last huge fire occurred in 1852 and destroyed part of the Old Town, the church tower and the old town hall in the market place, which had been there since the Middle Ages. The town hall was not rebuilt, and in its place a fountain was created in 1912, with a statue of a girl being attacked by a goose.

Barlinek is well known as the birthplace of Emanuel Lasker, the second World Chess Champion in the years 1894-1921, but also a prominent mathematician and philosopher. He was born on 24 December 1868 at 7 Chmielna Street.

At the turn of the 20th century, Barlinek gained favour as a summer resort and spa, and this was a time of great prosperity for the town.

During the Second World War, Barlinek suffered severe damage, especially the market place, but the town was carefully rebuilt afterwards. Still, some historic monuments survived the warfare almost intact. Following the war, Barlinek together with the eastern part of Brandenburg were allocated to Poland.

Would you like to visit Barlinek? Browse the catalog of Poland tours
Check our best tour
2022 dates available
Escorted Tours Poland