Bartoszyce is a small town of some 25,000 inhabitants situated in the very north Poland, and suffused with the Prussian-Teutonic spirit typical of the region. It makes a useful place to stay if you are on your way to Kaliningrad via the border crossing in Bezledy only 15 km away. 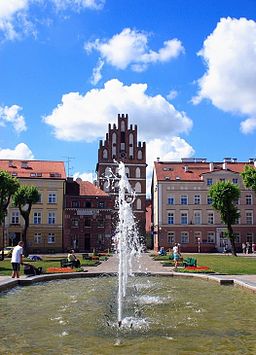 Despite its modest size, this town is quite important as a local centre, where the “Borderland” trade fairs (Targi Pogranicza) have been organised annually since 1994. The proximity of the state boundary has been combined with a special economic zone to help create the significance and development of the town.

Bartoszyce retains its mediaeval layout and a number of historic sights such as the Lidzbark Gate, several old churches, a belfry, and some granaries. There are also two stone monuments over a thousand years old, known as “Babies” (Bartki), situated in the small park in the centre of town. Besides this, you can visit the picturesque Lyna River where it cuts through the town and offers the opportunity to do some canoeing using equipment from one of the rental shops in the town.

Situated on the Lyna River, Bartoszyce belongs to the Warmian-Masurian Voivodship, one of the most attractive provinces in terms of tourism and known for its abundance of lakes. The closest lake to Bartoszyce is Kinkajmy, situated to the south-east of the town. Historically, Bartoszyce forms part of the Warmia region.

Originally an old Prussian settlement called Barcja, it developed in the 13th century thanks to the castle erected there by the Teutonic Knights. Like every other Prussian town, it witnessed the numerous wars between the State of Poland and the Teutonic Order.

In 1332 it received city rights as Bartnestein (earlier it was known as Rosenthal – “the valley of roses”). The town grew quickly due to its position on several trade routes. By the 16th century it had already become one of the strongest towns of the Teutonic state and then later Prussia. However, during Polish-Swedish and the Napoleonic wars it began to fade in importance.

The next period of development dates from the 1920s and 1930s. In 1945 it was incorporated to Poland and since then it has been called Bartoszyce.

Would you like to visit Bartoszyce? Browse the catalog of Poland tours
Check our best tour
2023 dates available
Escorted Tours Poland