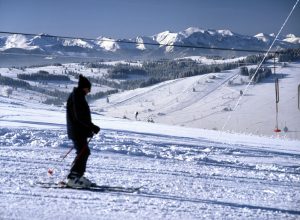 Bialka Tatrzanska is a paradise for enthusiasts of extreme sports, especially for keen skiers. There are a few well-prepared ski centres, like Kotelnica, Bania, Kaniowka and “U Kuruca”. In 2009 Kotelnica was recognised by Polish web portal Onet.pl as the Best Ski Centre in Poland. In 2012 it again won this contest.
The resort lies by the Bialka river, which is perfect for practising mountain kayaking and organising pontoon trips. The local hills, on the other hand, are often used by paragliders.
After an exhausting day spent on the slope, you may visit the local thermal pools. The Terma Bania complex was opened in June 2011. The thermal water is extracted from 2 500 metres depth and is 72°C hot. Everyone will find here something for themselves. The complex is divided into a few zones: the VIP, the loud one, the silent one, the saunarium as well as the SPA & Wellness zone. Terma Bania is open all year, irrespective of the weather conditions.
Bialka Tatrzanska, however, is not only a destination for keen skiers. The resort is also famous for its interesting monuments. Worthy of interest is especially the listed St. Simon and Jude the Apostles church from 1700, which belongs to the Wooden Architecture Route (Polish: Szlak Architektury Drewnianej). The church is composed of the presbytery, nave and the tower with a starling and a helmet. The inside of the church is baroque and baroque-classicist. The building is surrounded by a brick wall with gates from the 18th and 19th centuries. An interesting fact about the church is that in summer season masses are said in Latin.

You can visit Bialka while on your tour to Krakow.

Bialka Tatrzanska is a village in southern Poland, in the Lesser Poland Voivodeship, in the Tatra County and Bukowina Tatrzanska Commune. It is populated by approximately 2,000 people but during winter season this number is much greater. It happens that there are two or three times more tourists than Bialka’s inhabitants.
Bialka lies 15 km from Nowy Targ and 20 km from the city which is the main tourist center in the region – Zakopane. The highest-located area of the village is Kaniowka (725 metres above sea level). Bialka Tatrzanska has mountain climate with warm and mild summers and cold, snowy winters.

The village was most probably founded in the beginning of the 17th century, during the reigns of Wladyslaw IV Vasa. It is hard to find out the exact date of Bialka’s foundation since no incorporation charter exists. The village was then composed of the Tatra forests, like those by Morskie Oko lake and Woloszyn mountain massif. Most of its inhabitants were farmers but some of them also worked as shepherds and cloak makers and produced Bialka-famous sheepskins.
At first the village was in private hands, only in the 1630s it became the propriety of the starostwo of Nowy Targ. It was then called Nowa Bialka in honour of its first soltys (the head of the village), Wojciech Nowobilski.
In 1688 there was a fire in Bialka. It caused many damages; it destroyed the local chapel with a newly-built vicarage and the parish records. Soon after the fire a new wooden church was erected; it exists until now.
As a result of the First Partition of Poland Bialka together with 38 other villages of the Podhale region was joined to Austria. Under the reigns of Austria the Nowobilski family were still the proprietors of the village. They owned these terrains until 1964; later they were bought by the state and converted into the Tatra National Park.
The turn of the 19th century brought the recovery of the village’s economy. The inflow of money from Bialka’s former inhabitants residing abroad allowed for erecting new houses, farm buildings and a church and for buying new lands.
Hitler’s occupation of Poland destroyed the village. German overexploitation caused the extreme poverty of many land proprietors. After the end of the Second World War, Bialka’s inhabitants were still very poor. Only the development of tourism made them better-off. Currently Bialka Tatrzanska is one of the most attractive Polish holiday resorts.

Would you like to visit Białka Tatrzańska? Browse the catalog of Poland tours
Check our best tour
Escorted Tours Poland