Since the village of Bialowieza is only a kilometre from the heart of the Bialowieza National Park, itself a protected site on the Unesco World Heritage List, it is often used as a starting point for excursions into this magnificent woodland. Some of the interesting things to see in the little village include the Palace Park, the Russian Orthodox Church and the Natural History Museum. Bialowieza has many places that offer food and accommodation at very reasonable prices. 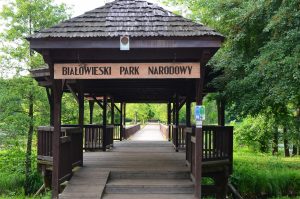 Lying in the direct vicinity of Bialowieza, the Bialowieza National Park preserves the largest remaining area of original lowland forest in Europe. The primeval forest covers a total of approximately 105 sq km, of which 4 km is under strict protection. Wolves, wild boar, elks, stags and lynx can be seen as well as huge, five-hundred-year-old oak trees.

The village is more than a gateway into the Bialowieza National Park, there is a 19th century rectangular Palace Park featuring some 90 species of trees and bushes, and housing the Natural History Museum. If you have some time to spend in Bialowieza before your tour into the national park, this museum is a great way to learn about the local habitat and the animals living in it. On display are hunting trophies as well as geological, ethnographic and geographical artefacts. You can also climb a viewing tower, which offers a beautiful prospect of the village, dominated as it is by well-preserved wooden buildings.

Worthy of a visit are the two churches of Bialowieza – the 19th century Russian Orthodox Church and the neo-Gothic sanctuary built in the 1930s.

Bialowieza is situated almost on the border with Belarus, 85 km southeast of Bialystok, in the eastern part of the central Vistula River valley. Spreading along some 3 km of the southern boundary of the Bialowieza National Park, the village has a population of less than 2,000 inhabitants.

The local climate, as in the whole of Podlasie Voivodship, is harsher than in other parts of Poland, strongly influenced as it is by continental air masses. Bialowieza lies in one of the cooler regions of the country, with an average annual air temperature of 7° Centigrade. Due to these climatic conditions, the snow cover can remain for over three months.

The genesis of the name ‘Bialowieza’ is a matter of some debate, although the supposition is that a white tower once stood somewhere in the village, and hence the name (‘biala wieza’ means ‘white tower’ in Polish). It is commonly believed that the name was first mentioned by that great Polish historian and chronicle writer, Jan Dlugosz, in his chronicle from the second half of the 15th century. He relates that in the winter of 1409, King Wladyslaw Jagiello went to Bialowieza and hunted there for eight days in order to supply his troops with meat.

The village of Bialowieza was a witness to many bloody combats from almost all wars and national uprisings. Throughout the centuries, the Bialowieza Forest served a number of Polish kings as a hunting ground – with the elected kings Kazimierz Jagiellonczyk, Stefan Batory, August II Mocny, August III Sas and Stanislaw August Poniatowski visiting the village.

Bialowieza boasts a rich history dating back to the 14th century, when a hunting lodge for Lithuanian princes – and later for Polish rulers – was built in this almost impassable forest. In time the place began to be known as Bialowieza. The hunting mansion was destroyed at the turn of the 17th and 18th centuries and rebuilt in the mid-18th century as a hunting palace belonging first to kings and then to Russian czars.

In 1807 it became a part of the Warsaw Principality and in 1815 of the Kingdom of Poland.

The settlement developed at the turn of the 18th and 19th century, causing the destruction of the forest through increased hunting and the felling of trees.

In the mid-19th century Czar Alexander II had a hunting lodge built in Bialowieza. Between 1889 and 1893 a pompous palace was erected for Czar Alexander III according to the design by Count de Rochefort.

In 1919, following a period of Russian and German occupation, the village was returned to Poland. Its rebuilding began the same year and was completed by 1923. The Bialowieza National Park was set up in 1932, and during the same period it was more served as a representative hunting ground.

Heavily damaged during World War II, Bialowieza had to be rebuilt afterwards and then the National Park was reactivated in 1947, two years after the war ended.

Would you like to visit Bialowieza? Browse the catalog of Poland tours
Check our best tour
2023 dates available
Escorted Tours Poland