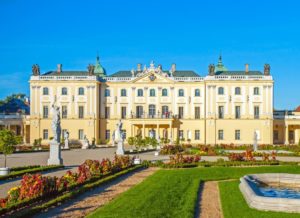 Bialystok is not a “must” for tourists visiting Poland, however intriguing it may be. Unlike most cities in Poland, Bialystok is settled by various nationalities (Poles, Russians, Belorussians and Tartars) and religious groups (Catholic and Orthodox) who coexist there peacefully. The most attractive sight in Bialystok is a palace dubbed the “small Versailles”. The whole region is dotted with Catholic, Orthodox, Muslim and Jewish temples, attracting both pilgrims and tourists, but it also has unrivalled natural features, including wild woods and meandering rivers.

Bialystok, with a population of almost 300,000 people, ranks among the larger Polish cities. As the capital of the Podlachia province, Bialystok is in fact the main industrial centre of north-eastern Poland and an important academic city.

Despite the high rate of unemployment in the region, Bialystok is gradually developing thanks to its convenient location within close proximity of the Belarusian, Lithuanian and Russian borders. Besides, it takes advantage of the nearby main overland routes, including the railway line (Berlin-St. Petersburg-Moscow) and the Via Baltica highway. Thus, Bialystok maintains strong economic and cultural relations with the countries of Eastern Europe.

Only a small part of the old architecture survived in Bialystok, but there are several places that are certainly worth a visit. Besides, the Podlachia region is known for its uniquely clean environment, protected in several national parks and reserves. Exploring the rich cultural heritage of the neighbourhood may provide visitors with many surprises, including discovering the traces of a Muslim and Jewish presence.

Considering that the city has been a melting pot of diverse nations, cultures and traditions, it is easy to understand why it was in Bialystok that the artificial language of Esperanto emerged. Its inventor, Ludwik Zamenhof, wanted to find a simple way of communication between nations. Although Esperanto did not become a commonly-used international language, it has spread all over the world, gaining many supporters (with around 2 million users world-wide).

If you wish to discover the beauty of the north-eastern Poland and nearby Lithuania, you can take the Poland’s East and Lithuania tour, which is one of the trips starting from Warsaw.

Bialystok is the largest city in north-eastern Poland, situated in the Podlaska Lowlands. The city owes its name to the Biala River (literally “white river”). It is surrounded by the wild woods of the Bialowieza Primaeval Forest and the Narwianski Park Narodowy, making the region particularly attractive for active leisure enthusiasts. Another truly unique feature consists of the two natural reserves which are located within the city’s borders. Bialystok’s climate is a bit colder than Poland’s average.

The first settlement on the site of today’s Bialystok was first mentioned in the 15th century as Bielszczany Village. Two hundred years later, it was already a town with a market square and a wooden church. It was at that time,in the 17th century that Bialystok was presented to Stefan Czarniecki, the Polish commander who had defeated the Swedes, as a prize for his victory.

Later, it became the property of an aristocratic family named Branicki, to whom it owes its quick development. The 18th century owners, Jan Klemens Branicki and his wife, were particularly known as patrons of the arts and sciences; they not only established a hospital, a city hall, a post office and a theatre but also expanded their mansion, turning the previously modest abode into an impressive Baroque palace.
After Poland’s Partitions, Bialystok initially belonged to Prussia, but then was passed to the Russian Empire according to the Peace Treaty of Tilsit, signed in 1807.

The 19th century, despite a difficult Russian-Polish relationship, saw the intense expansion of the textile industry. Many of the manufactures were moved to Bialystok from the city of Lodz by the owners, who wanted to avoid the high taxes of exporting goods to Russia (and Bialystok was in fact a part of Russia). The opening of the railway line from Warsaw-St. Petersburg accelarated the development of the city.

In those times, Bialystok became an important centre for Polish Jews. They formed, together with the Poles, two major national groups living in the multiethnic city, apart from Russian, German, Lithuanians, Belorussians and Tartars. After World War I, Bialystok served as capital of one of the Polish provinces, in spite of some attempts to establish a Polish Soviet Socialist Republic made by a group of Polish Communists, who had their headquarters in Bialystok for a short time.

During World War II, Bialystok changed hands several times, passing from Nazi Germans to Russians and back. There was a strong resistance movement led by the Home Army. The Jewish population experienced the largest losses, as their representatives died in ghettos or camps.
In 1945, Bialystok again became a Polish city and gradually began to return to normality, which resulted in rebuilding some of the monuments and reopening new schools. Although Bialystok has lost its multiethnic character to a large extent, it remains the main Polish centre of Orthodoxy, with groups of Belarussians, Ukrainians and Poles living side by side. The city maintains its close boundaries with Poland’s eastern neighbours – Belarus, Russia, Lithuania and Ukraine.

Would you like to visit Bialystok? Browse the catalog of Poland tours
Check our best tour
Escorted Tours Poland