Biskupiec is a paradise for nature lovers. It will surely surprise you with the richness of nature and enable you a close contact with rare species of plants, animals and birds. Neighbouring lakes are a great attraction to keen anglers and forests – a paradise for mushroom pickers. 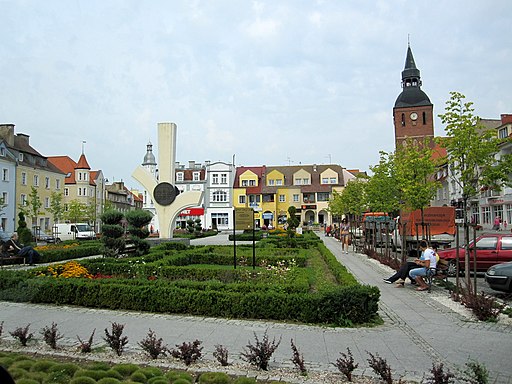 Biskupiec is an ideal place for nature lovers. In local forests you may meet deer, roe deer, boars, hares, foxes, pine martens as well as numerous species of birds. Local lakes are a real paradise for keen anglers. There occur many species of fish, for instance bream, tench, carassius, eel and pike.
Biskupiec may boast of many monuments. Visitors are recommended to see a former town hall from 1895 located at Pionierow Street, St. John the Baptist Church from 1580, Evangelical Church of the Augsburg Confession built in 1842-46 as well as a water tower from early 20th century. Very interesting are also monuments in Biskupiec neighbourhood. These are for example classical manor from the late 18th century in Droszewo, neo-gothic Saint Joseph Church built in between 1897 and 1899 in Kobulty and chapels in Biesowko and Wilimy.

Biskupiec is situated in the north-east of Poland, in Warmian-Masurian Voivodeship. Two transit roads, no 16 (connecting Belarus with Gdansk and Gdynia) and no 57 (Warsaw– frontier post in Bezledy) cross here. Biskupiec is easily accessible both by car and bus and its unquestionable advantage is close proximity to many tourist-attractive places in Masuria.

The first records about Biskupiec are from 1395, i.e. the year when the settlement gained town rights. At first Biskupiec was a small and poor town, surrounded by a curtain wall and two gates, Reszelska and Szczycienska. In the south-east part of the town there was a market with a town hall. Biskupiec’s location was peripheral; it was situated far from the roads passed by merchants. Its inhabitants earned their livings mainly on tillage and cattle farming.
The town was often stalked by pestilence and fire. In 1414 Biskupiec was destroyed and desolated, and as a result of the Thirteen Years’ War (1454-1466) the whole town was reduced to rubble. The partitions of Poland did not get around Biskupiec. As a result of the first one Warmia together with Biskupiec was joined to Prussia.
From the second half of the 19th century the town began to develop. It was then that it started to operate as a local administrative centre. The number of inhabitants greatly increased and the network of roads was built.
During the First World War Biskupiec was not directly exposed to warfare, but the WW2 brought great destructions. After the war the town started to revive. The first school was opened and a power station, a sawmill, a mill and a water supply system began to operate. In 1950s industrial plants in Biskupiec saw a dynamic development and in 1960s the town became the county capital.

Would you like to visit Biskupiec? Browse the catalog of Poland tours
Check our best tour
2023 dates available
Escorted Tours Poland