Blonie is a town by the Rokitnica river, situated on the west side of Warsaw. It is not a typical tourist resort. In fact it is rather considered as Warsaw’s “bedroom.” Its perfect location and relatively low land and estate prices encourage people to move here. Moreover, due to their location near Poland’s capital, Blonie-based hotels are willingly chosen by businessmen for their business trips to Warsaw. 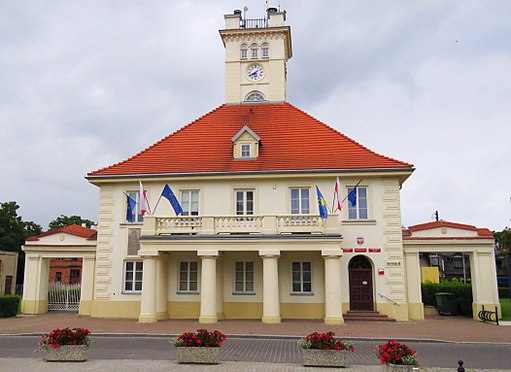 Blonie is not a typical tourist resort. It is more often associated with industry and production plants like Polbita Ltd. (the owner of Natura drugstore chain) than with tourism itself.
Blonie cannot boast of many monuments, yet there are some worthy a visit places here. We especially recommend for you to see: the early Gothic church of St. Trinity from 1257, classicist town hall from 1842, Jewish cemetery from the 19th century and Poniatowka Manor from 18th/19th century (a summer residence of Prince Jozef Poniatowski).

Blonie is a town and seat of the commune in the Masovian Voivodeship, in West Warsaw County. It lies on Lowicz-Blonie Plain, 18 km west from Poland’s capital, by the Rokitnica river. It has the population of over 12,500.
In Blonie country and voivodeship roads cross: no. 92 (Warsaw – Blonie – Kutno – Poznan – Rzepin), no. 579 (Nowy Dwor Mazowiecki – Blonie – Grodzisk Mazowiecki) and no. 720 (Nadarzyn – Brwinow – Blonie).
Blonie’s perfect location near Warsaw makes it a very attractive place to live in for a lot of people.

The first records about Blonie are from the 11th century, but probably it came into existence much earlier. In the end of the 12th century Blonie was a large settlement and in 1257 Duke Konrad II of Masovia founded a church, which has survived until these days.
On 2 May 1338 the town was settled with German law and in 1380 it was given special location privileges, including the right to hearings and launching goods on Blonie market without customs duties. Since the end of the 15th century the town was a significant trade centre.
In the 16th century Blonie was a rich town, famous for great shoemakers and brewers. Once a week a bazaar was held here and five times a year a fair was organised.
In the early 18th century, as a result of Swedish invasion, the town was devastated. The town hall among others was burnt. In order to gain more money and rebuild the town, Blonie authorities passed bills introducing new taxes.
After the Swedish invasion, another tough time for Blonie was Kosciuszko Uprising. In 1795 the town was annexed to Prussia.
In between 1807 and 1815 Blonie belonged to Duchy of Warsaw and later to the Kingdom of Poland. The early 20th century brought economic boom and a railway connection with Warsaw and Lodz.
With the outbreak of the WW1 the peaceful days ended. Many people died of cholera and from the battles which took place near Blonie. On 11 November 1918 Blonie inhabitants disarmed German troops and regained the power in the town.
The interwar period again brought peace and flowering of cultural and social life. The town had income from its enterprises and exploiting power grids, slaughterhouse and market place; it also ran its own precast concrete factory and public bath.
During the Second World War and German occupation, nearly 2.5 thousand people were killed in Blonie. In 1939 a transit camp for Polish prisoners of war was created; it was later transformer into a labour camp.

Would you like to visit Blonie? Browse the catalog of Poland tours
Check our best tour
Escorted Tours Poland