Bochnia is a small town near Krakow, well known as being the location of the oldest production workings in Europe with a salt mine opening around the year 1248. It might not be as impressive as the one in Wieliczka, but it is still worth a visit, even if just for the spa centre located inside the mines. Besides the salt mine, Bochnia has a number of attractions above ground as well, one of them being the historic Old Town, exuding a quaint charm of its own. 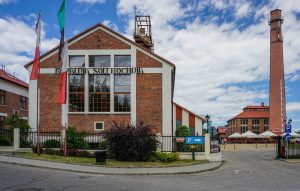 The salt mine in Bochnia is Poland’s oldest, having been in constant operation for 750 years. A couple of years ago the mine was opened to the public, enabling everyone to explore the 300-meter-long network of corridors and fascinating, underground chambers.

Unlike in Wieliczka, visitors to the salt mine in Bochnia often get a chance to meet working miners. Another attraction not to be missed is Wazyn, which at 50 m long and 10-12 m wide is the mine’s largest chamber. Its impressive size allows it to be used for organising different events, including New Year’s Eve celebrations. This remarkable chamber has been equipped with beds, sleeping bags and pillows to accommodate visitors overnight.

A normal visit to the salt mine will take no more than about 3 hours, but you may stay longer if you wish to take advantage of the unique microclimate of the salt mines, long recognised for its beneficial effect on certain ailments, including allergies.

Still, the other attractions that Bochnia offers its visitors include the particularly worthy Gothic building of the St. Nicholas Basilica and the Stanislaw Fischer Museum, which exhibits Polish paintings from the first half of the 20th century.

Bochnia lies in the central part of Lesser Poland, on the Raba River, which makes it a great starting point to explore various places of interest in the Beskidy Mountains. There is a great deal of varied landscape near the town, including the endless plains that are home to the Niepolomicka Forest, the Wieliczka Foothills with the Wisnicko-Lipnicki Landscape Park as well as the Beskid Wyspowy Mountains.

Owing to its convenient location near the E4 international highway, Bochnia can be easily reached from just about anywhere. The town is situated 30 km from Krakow (check our Krakow tours) (45 km from Krakow Balice Airport), 25 km from Wieliczka and 100 km from Oswiecim (Auchwitz).

Among the oldest towns of Lesser Poland, Bochnia was first described in 1198 in a letter by Aymar the Monk, Latin Patriarch of Jerusalem, where he acknowledged a donation from local magnate Mikora Grufit to the monastery of the Order of the Holy Sepulchre in Miechow. At the time Bochnia was a settlement of miners that, owing to its location next to important merchant routes, was enjoying thriving trade relations.

Following the discovery in 1248 of a thick vein of rock salt at the site of the present day mine, the first mines were established in 1251 and the settlement began to develop rapidly as a centre for mining and salt making.

On 27 February 1253, it was granted city privileges (Magdeburg rights) by King Boleslaw V the Chaste (Boleslaw Wstydliwy). The German name for Bochnia was “Salzberg”, which literally means “Salt Mountain”. It became a prosperous town, with a solid economy built on both the salt trade and cloth making. In the 14th and 15th century Bochnia was one of the largest towns of Lesser Poland, almost a match for Krakow and Sandomierz.

And then, at the end of the 16th century, this period of prosperity ended. The history of Bochnia in the 17th century is but a series of misfortunes with a series of plagues, burning down of the town, and plundering… In the years 1655-1657 Swedish troops caused terrible damage to the town, a work of destruction later to be completed by the Cossacks. In 1772 Bochnia came under the rule of Russia, but later in the same year, as a result of the first partition of Poland, it fell under Austrian control. After the town was linked to the advancing railway system in 1856, further modernisations followed, such as the establishment of the first public library in 1886 and the opening of a cinema in 1913.

In the course of the First World War, the town was a scene of heavy fighting between the Russian and the Austrian army. Russian troops completely plundered Salzberg, and killed several of its inhabitants.

The Second World War likewise brought terrible experiences to Bochnia. The 10th of September 1939 saw the biggest battle of the region take place on the fringes of the Niepolomice Virgin Forest (Puszcza Niepolomicka). Bochnia was liberated in January 1945.

Would you like to visit Bochnia? Browse the catalog of Poland tours
Check our best tour
2023 dates available
Escorted Tours Poland