This maritime town of approximately 15 thousand permanent inhabitants becomes a bustling place every summer. Starting from June, crowds of holidaymakers arrive to enjoy the sunny beaches, clean air, and historical sights that contribute to the town’s nickname of “the pearl of Middle Pomerania”. Together with adjoining Darlowko, it is a popular sea resort offering many possibilities for active vacationing. 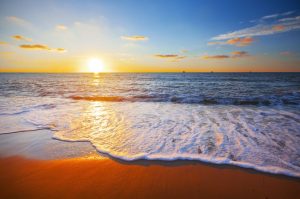 The mediaeval layout of the old town has remained almost unchanged to this day, as has the Gothic church of St Mary of Fatima from 1394. Inside you can admire the beautiful polychrome, the wooden pulpit and the tombstone of King Eric. Another interesting sight to see is the lapidary, quite near the church, and the ancient Oak of Luther. In the Main Square are the Baroque Town Hall, the Chapel of St Gertrude and a fountain with a figure of a sailor. Those who are interested in weapons and aviation should visit the open-air museum.

However, the main highlight of Darlowo is the Castle of Pomeranian Dukes situated on the island. From the tower you can enjoy extensive views over the town and the local countryside. Its original interiors house the museum of Darlowo’s histor, and it includes many interesting items such as paintings, sculpture, furniture, weapons, objects made from amber, maps and much else.

The beaches of Darlowo are popular among holidaymakers and the patients who visit this place to take care of their health. The district of Darlowko is known especially as a health resort, but you can also have a cruise on a ship or water tram, while another attraction is the bascule bridge on the Wieprza River.

A surprising attraction is the local power station, which has some of the highest mills in Europe. These total some 118 m and are a curiosity that regularly draws numbers of visitors to Darlowo.

The town is situated near the mouth of the Wieprza River on the Baltic Sea, towards the western part of the Polish coastline between Gdansk and the German border. Darlowo is located some 30 km east of Koszalin.

First mentioned in documents from 1271, Darlowo became a member of the Hanseatic League in the mid 14th century. It is probable that it had already been in existence even before the 13th century as a wooden settlement known Dirlov (or Dirlovo).

For some time Darlowo was ruled by a Pomeranian duke, Eric, who became the King of Denmark, Sweden and Norway soon after. Eric was a really fascinating person with an unusual history. He was born there, in Darlowo Castle, in 1382. His controversial policy in three kingdoms caused protests and as a result he was dethroned and he settled in Visby, Sweden, to start a new episode of his life as a pirate. His wife had died by this time and he lived with her maid, Cecilia, whom he married and spent the last years of his life in Darlowo.

In the 17th century, the Brandenburg Duchy took control of the town, and it remained under German rule until World War II. Since 1945 it has been within Polish borders.

Would you like to visit Darlowo? Browse the catalog of Poland tours
Check our best tour
2023 dates available
Escorted Tours Poland