As a city with a bitter-sweet past and seemingly bright future, Elblag has always been an accurate indicator of Polish-German relationships. The town came into existence thanks to the close cooperation of Poles and Germans, but suffered great injuries whenever the two neighbouring nations entered into a state war. The contemporary Elblag bears witness to both periods and takes pride in its dual ancestry. That is why here you will find magnificent medieval monuments created mutually by the two nations and the remnants of an Old Town district almost completely destroyed during World War II. 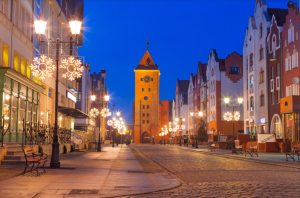 Elblag is a medium sized port city inhabited by some 126,000 people. Since the end of the World War II the city has grown into a prosperous industrial, academic and cultural centre, drawing visitors from all over the world. Although before the war the city was much bigger and was one of the most important urban centres of the region, today’s Elblag is still significant due mainly to its shipyards, breweries and the thriving metallurgical industry. Moreover, in 1998 the city made a sizable step towards regaining its former grandness by initiating Euroregion Baltic – the union of six Baltic countries (Poland, Russia, Latvia, Estonia, Sweden and Denmark), aimed at cultural, political and financial partnerships.

Elblag is also a historical site with numerous tourist attractions. Here you will find characteristic medieval red-brick tenement houses and churches, including the St. Nicolas Cathedral located in the Old Town district. Although the historical centre of the town combines the architectural styles of Gothic, Baroque, and Renaissance, almost none of its buildings are more than fifty years old because the Old Town suffered such extensive damage during World War II. In 2000, however, the local authorities decided to accelerate the reconstruction of the city and to cooperate with archaeologists in restoring the original prewar appeal of the city. Out of the meticulously reconstructed buildings the most imposing are the City Gate and St. Mary’s Church (turned into an art gallery).

Elblag is located in Northern Poland, in the Warmińsko-Mazurskie voivodeship. The city lies on the Elblag River, which connects the nearby Lake Drużno to the Vistula Lagoon. The river is curbed by the Jagielloński and Elblaski Channels, which connect the town with nearby lakes and constitute a popular tourist attraction. The area surrounding the city belongs to the Vistula Delta (Zulawy Wislane) region, which is predominantly flat and used for agricultural purposes. To the west of Elblag there are extensive plains and open fields. The southern views are of the marshes and swamps that encircle Lake Druzno.

The history of Elblag starts in 1237, when the Teutonic Knights from Malbork built a castle near a river called ‘Elblag’. Soon a settlement grew up around the castle, which in 1247 received a constitution under Lubeck law, thus becoming the city of Elbing, as it was originally known. At first the town was populated mostly by German settlers, who brought with them their traditions, cuisine and architectural styles. The newcomers were accommodated fairly quickly and turned the relatively small town into a flourishing trade centre for the region. Moreover, thanks to the effective constitution and the support of the Teutonic Knights, Elbing became also an important port city and, since 1358, a member of that prosperous Baltic-trade monopoly – the Hanseatic League.

Despite Elbing became the second most important city of the region (after Gdansk) in the 15th century, its citizens of Prussians, Germans and Poles were not happy with the oppressive Teutonic rule over the city and the remaining parts of Prussia. Hence in 1440, Elbing decided to join other important Prussian towns (i.e. Torun, Gdansk) in forming the Prussian Confederation to help Poland battle the Teutonic invaders. After a successful revolt, the city of Elbing (now renamed to ‘Elblag’) and the rest of Royal Prussia became a part of Poland.

The following centuries brought both great success and immense devastation. At first Elblag received numerous privileges from local Polish princes and kings, thus becoming the most prosperous town of the region. However, in the 17th century the city suffered great damage due to the Swedish invasion, when it was plundered, forced to pay contribution and its inhabitants were decimated by the sword and by plagues. Later on, after the First Partition of Poland in 1772, the Kingdom of Prussia annexed Elblag and during the following decades the city endured a phase of stagnation.

The city broke out of its slumber in the 19th century, when the Elblaski Canal was dug and a railroad connection made with the rest of Europe. These events marked the beginning of Elblag’s industrialization, which manifested itself not only in the growing number of factories but also the Schichau-Werke shipyard employing state-of-the-art hydraulic machinery to produce ships and some of the world’s first torpedoes. Elblag became a part of the German Empire in 1871, following the unification of Germany.

The most tragic period in the history of Elblag happened during World War II. Between 1940 and 1945 Germans set up two concentration camps near the city. When in 1944 the Russian Red Army approached the city, nearly all of Elblag’s German inhabitants fled west, leaving their homes and personal belongings behind. Considered intrinsically German, the deserted city was first plundered by the Red Army and then set on fire, which consumed nearly 65% of the city and its historical elements.

After the war, when Elblag was reunited with Poland, the German inhabitants who had left during the Russian offensive were not allowed return as the city was to undergo an extensive process of polonization. The efforts very largely successful, as proved by the fact that at present nearly 98% of Elblag’s inhabitants are Polish. In the 1990’s the town began the painstaking process of reconstructing its historic districts, which at present the works are 70% complete.

Would you like to visit Elblag? Browse the catalog of Poland tours
Check our best tour
Escorted Tours Poland