A city in northern Poland, Frombork is often associated with Nicolaus Copernicus. He spent most of his life there, and the Cathedral Hill where he used to work is now the major tourist attraction of Frombork. Not only him, but also the whole history of the Warmian bishops and the imposing architecture of the cathedral complex itself draws visitors every year. 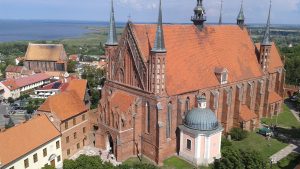 Nicolaus Copernicus, one of the world’s most famous astronomers whose books brought about a revolution in Renaissance science, was born in Torun but carried out the majority of his research in Frombork. From 1513 he was a canon of the Warmian Bishopric and used one of the towers in Frombork as an observatory, and it was there that he worked on his notorious De revolutionibus orbium coelestium. Nowadays visitors to Frombork can head to the museum in the Old Bishops’ Palace, which houses many exhibits connected with the life and work of this scholar, including manuscripts and early editions of his books. There is also a copy of Jan Matejko’s painting Astronomer Copernicus. Dialogue with God.

Apart from the interesting exhibition, the remainder of the imposing Cathedral Hill is undoubtedly worth exploration. This monumental cathedral is a redbrick Gothic construction decorated with many turrets. Inside you can view the interesting Baroque organ, or even hear it being played if you visit at one of the Sunday summer recitals organised during International Festival of Organ Music, as well as discover the intriguing tombstones and epitaphs elsewhere in the edifice. Another place to visit is the belfry and its planetarium, and if you still doubt that the Earth rotates, take a look at the Foucault pendulum in one of the towers.

Apart from being a tourist destination, Frombork serves as a fishing and sailing port due to its location on the bank of the Vistula Lagoon. From the local port you can go for a cruise on the Lagoon or have a trip on a ship or hydrofoil to Krynica Morska, Elblag or even Kaliningrad in Russia. If you want to enjoy water sports, such as sailing, you can acquire experience on the challenging conditions of the Lagoon. Sailing its waters resembles to some extent lake sailing, and yet is also similar to a real sea adventure. If you come in the winter, then ski sailing is popular.

Frombork, one of the most interesting towns of Warmia, belongs to the Warmian-Masurian Voivodship. The town lies on the shore of the Vistula Lagoon and plays the role of a fishing port and yacht marina. Frombork is also situated on the canal linking the Bauda River with the Vistula Lagoon.

The name of Frombork (Frauenburg) has, similarly to Malbork (Marienburg), the “bork” element, which derives from the German word “burg” (fortress). Consequently, Frombork can be translated as “Fortress of the Lady”.

The beginnings of the town date back to the 13th century when pagan Prussians destroyed Braniewo cathedral and as a consequence the bishops of Warmia needed to change their place of abode. The high and inaccessible hill seemed to be ideal for a new site of the bishopric. At the foot of the fortified cathedral, a fishing settlement developed, luring more and more Germans to come and stay there. Interestingly enough, the two settlements of the Cathedral Hill and the fishing village were independent and separate, and came to form one town only in the 19th century.

In the first half of the 16th century Frombork, Nicolaus Copernicus came to live and work, being at the same time a member of the Warmian Bishopric.

Despite the fortifications, Frombork was attacked several times. In the 15th and 16th centuries, the Teutonic Knights tried to capture the town several times and then in the 17th century Frombork was a target of Swedish invasions. It was the Swedes who achieved the greatest destruction of Frombork and they even plundered the bishopric, taking precious books and documents.

Since the tail end of the 19th century Frombork has gradually become a holiday resort, partly thanks to the new road from Elblag and the railway from Elblag to Braniewo. World War II brought fresh devastation of the town that resulted in the bishopric being moved to Olsztyn.

Would you like to visit Frombork? Browse the catalog of Poland tours
Check our best tour
Escorted Tours Poland