Visiting the lively maritime town of Gdynia, it is hard to believe that some eighty years ago it was a small village. Nowadays, this important harbour and business centre is bustling with life. Gdynia can be a great destination for anyone who wants to relax without giving up the advantages of a vibrating urban area with many entertainment opportunities, superb clubs and restaurants. 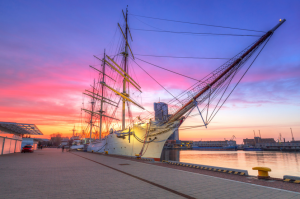 Gdynia is one of the youngest Polish cities, which is reflected in its appearance and atmosphere. Its bustling centre and harbour are visited mainly in the summer, due to its maritime location and the long sandy beaches. Throughout the entire year, it plays the role of one of Poland’s major seaports and a major shipbuilding area.
Apart from the shipyard, Gdynia is a thriving centre of business, boasting the status of the most prosperous Polish city. Its close vicinity to two other towns, Gdansk and Sopot, which together form an urban agglomeration, helps to develop commercial activity.
As far as sightseeing is concerned, Gdynia is especially suited to admirers of 1920s and ‘30s architecture, as you can hardly find anything older there. The great attractions of the city are two ships-museums, the frigate Dar Pomorza (The Gift of Pomerania) and the destroyer Blyskawica (The Lightning), while the Oceanographic Museum and Aquarium allow visitors to deepen their knowledge of the sea.
For a place to relax, it is best to visit the nearby Kepa Redlowska natural reserve, or the beautiful environs of Orlowo. Gdynia itself has an active nightlife and excellent restaurants. Moreover, the city hosts two important cultural events, the Polish Feature Film Festival and Summer Jazz Days.

Gdynia is situated along Gdansk Bay, the part of the Baltic sea sheltered by the Hel peninsula. The coastline is fringed with a long, sandy beach. The main engineer of the port and its founder chose this place because, as he wrote in 1920, Hel defends it from the wind, the water by the seashore is deep, the coast is low,and the Chylonia brook provides Gdynia with fresh water. There is also a small river named Kacza that crosses the southern area of the city.

The neighbourhood of Gdynia can be very attractive as a tourist destination. From the south, it is surrounded by the area of Tricity Landscape Park, and deeper into the interior the Kashubian Lakeland spreads out. 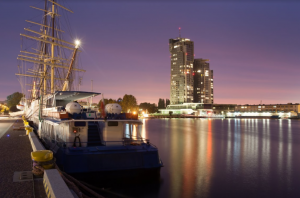 Although the first written notes about its settlement primarily appeared in the 13th century, there is no doubt that Gdynia is one of the youngest towns in Poland. It was built almost from scratch just after World War I, when Gdansk became a free city under the control of the League of Nations and the country was lacking a seaport. As a result, Poland obtained a wide and modern window on the world.

Earlier, there was a small seaside village on this site, first mentioned in the 13th century. Similarly ancient is Oksywie, which used to be a separate locality and is now located within Gdynia’s borders. Several monuments remain which date from the Middle Ages.

From the 14th to 18th Centuries the territory of today’s Gdynia belonged to the Cistercian abbey in nearby Oliwa. The village was really tiny; in 1789, there were only 21 houses there, yet the following century brought modest development to Gdynia. In the beginning of the 20th century, it even gained in popularity among some tourists, and consequently the first guesthouses appeared.

After World War I, the area of Gdynia was chosen for the construction of a port, and from that point on the phenomenal development of the city began. This early period was described by great Polish novelist Stefan Zeromski in Wind from the Sea. Thanks to the dedication of Eugeniusz Kwiatkowski, the Polish Minister of Industry and Trade, the port was completed as early as 1930. It continued to develop, so that by 1938 Gdynia had the most modern port on the Baltic sea and a great shipyard.

In the meantime, Gdynia was granted city rights and its population rose at an incredible rate. In the 1870s, there were just over a thousand inhabitants, but by the late 1930s the number had grown to 110,000. The port had been effectively fulfilling its function until September 1939, when the Germans invaded Poland, turning the town into a German naval base and renaming it Gotenhafen.

During the war, Gdynia witnessed several air raids by the Allies from 1943 onwards, but the real destruction was actually caused by the withdrawing German troops in 1945 (90 percent of the buildings and equipment were destroyed). After the war, the town was completely reconstructed. The historic shipyard is still its greatest domain, despite some transitory financial problems.

In 1970, a wave of workers’ protests swept Pomerania. One of the epicentres of this phenomenon was Gdynia, where a shipyard crew leaving for home after a strike against the economic crisis were fired upon by police. This incident was immortalised in a ballad about Janek Wisniewski, the symbolic victim of the Communist regime.

Would you like to visit Gdynia? Browse the catalog of Poland tours
Check our best tour
Escorted Tours Poland