Located amongst woods and lakes, this little village is renowned for being home to the Wolf’s Lair – the wartime headquarters of Adolf Hitler, and comprising a complex of 80 strong bunkers built between 1940 and 1941. The German dictator resided here from June 1941 until November 1944. In an atmosphere of mystery visitors marvel at the imposing fortifications, erected in a surprisingly brief span of time and for years undetectable to radar. The museum in Gierloz is a must for all history enthusiasts looking for answers to the riddles of World War II as well as for all those who want a change from sunbathing and swimming in the Masurian lakes. Despite its small size, the village has a hotel with 30 rooms (single and double) and a campsite. 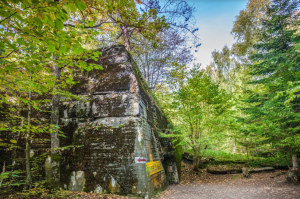 Different components were used to build Hitler’s headquarters, chiefly stones pulled out from the surrounding lakes. Eight of the bunkers had walls 1 to 6 m thick, while the thickness of the roof ranged from 6 to 8 m. The Wolf’s Lair was extremely well protected – encircled by a belt of minefields with anti-aircraft emplacements. In order to disguise the bunkers they were thoroughly covered with camouflage nets, whose colour was changed with the changing of the seasons.

As unbelievable as it sounds, the fortress was complete with its own railway station, airfield, power plant and source of water. It maintained continuous contact with Berlin and with the entire battlefront.

It was in Gierloz that, during a military conference on 20th July 1944, Hitler miraculously evaded death when Major Claus von Stauffenberg, the commander of a group opposed to Nazi rule, set off a bomb in a vain effort to assassinate the tyrant. In the museum there is a plaque devoted to the memory of Claus von Stauffenberg.

On 24th January 1945 the escaping Germans attempted to hide traces of their wrongdoing by blowing up the construction. After the war, it was cleared of mines, partly rebuilt and converted into museum that welcomes guests throughout the season. The best maintained canteen bunker serves as a restaurant, called ‘Wilcze Gniazdo’.

While in the district of Great Masurian Lakes, you should pay a visit to Ketrzyn, the main town in the neighbourhood. It has several historic buildings, including a Gothic church and a Gothic castle that now houses a museum. Also worthy of a visit is Swieta Lipka – a tiny village known for its importance as a religious centre for Northern Poland and a draw for pilgrims. Within the monastery complex stands the 17th-century church of the Blessed Virgin Mary, and the monastery also holds famous organ music concerts.

Gierloz is situated in the north-east of Poland, in the Masuria region (Warmian-Masurian Voivodship with capital in Olsztyn), 8 km east of the town of Ketrzyn. The population of the village is only 20.

The village got its name from a man called Hans von Görlitz, who in 1353 owned a hunting lodge there. Prior to World War II Gierloz was a Sunday trip destination for people living in nearby Ketrzyn. In 1934 Fritz Schultz became starost of Ketrzynski District, and was among the first members of the NSDAP within East Prussia. It was his influence that led to the decision to locate Hitler’s main headquarters in his district.

Would you like to visit Gierloz? Browse the catalog of Poland tours
Check our best tour
2022 dates available
Escorted Tours Poland