Surrounded by the waters of the Baltic Sea on three sides, Hel is a unique town in Poland – and each year it attracts thousands of people wanting to spend time at the seaside. Hel offers them exceptional holiday opportunities, full-time relaxation on the beaches and a famous seal centre, the only one in Poland. During the summer plenty of people relax here in private houses, on camping sites and in guesthouses. 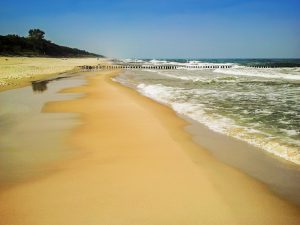 The town is still developing as an important sea fishing base and as a region interesting for enthusiasts of history, but the typical, healthy maritime climate makes the place a real paradise for those who just enjoy sunbathing and swimming in the sea. There is a single long and wide sandy beach on the high seas side while on the Puck Bay side is the “small beach”, near the port and promenade with its narrow and irregular coastline and several capes. The shallow and calm waters of Puck Bay’s “Little Sea” give fishermen an opportunity to fish safely. That is why all towns of the Hel Peninsula are situated on this side, separated from the sea by the forest and the sandbar.

If you are going to visit Hel, why not drop in to seal centre at the Hel Marine Station? It is a breeding centre for seals, which are later released to help re-establish the species in the Baltic Sea. It is definitely the biggest attraction for children here. The Museum of Fishing is also worth seeing – located in a former church with a high tower from which you can admire the beautiful landscape. The second most popular spot for visiting is a lighthouse dating from the early 19th century.

There is a promenade in the centre, with many amazing small cafes in the fishing style to encourage you take long walks down there. The harbour now serves primarily as a yacht marina, but you can sail to Tricity from there as well. Hel houses a sea life biological laboratory, a geophysical observatory and throughout the town there are many interesting examples of naval armament and equipment exhibited (torpedoes, torpedo tubes, mines etc.). The stone strengthening of the breakwaters and many interesting wrecks in the shallow sea near Hel make the area most popular for divers (e.g. a U-Boot and the tugboat Abille).

Hel is situated in the Pomeranian Voivodship in northern part of Poland, on the tip of the Hel Peninsula and some 34 kilometres from the Polish mainland. There are other seaside towns on the peninsula, including the famous Jurata (10 km) where Polish presidents spend their holidays, Jastarnia (13 km), Kuznica (20 km), and Chalupy (25 km) where windsurfers can enjoy the best winds in this part of Europe.

The name of Hel exists in Danish documents as early as 1198, but the first settlement in this place was much earlier. At that time most of inhabitants were fishermen, all other goods being brought here from other nearby locations. There were also some taverns, for the many sailors who often visited Hel. The 15th century saw the building of a new church of St. Paul, patron of fishermen. This church still exists to this day, currently playing the role of Museum of Fishery.

During its rich history Hel has been owned by a number of different countries at various times. For many years it was under the rule of Gdansk, while after the Partitioning of Poland it was annexed by Prussia. After World War I, as a result of the Treaty of Versailles, Hel became a part of Poland. On February 10th, 1920 there was a symbolic celebration held here – the Nuptials of Poland with the Sea.

Before World War II it was decided to limit access to the town and the peninsula in order to create the Fortified Region of Hel – a strategic defensive point. After the aggression of Germany on September 1st, 1939, Hel became famous as one of the heroically and long defended regions of Poland. The city was liberated in 1945, and after the war it grew not only as a fishing port, but also as one of the most popular Polish holiday resorts.

Would you like to visit Hel? Browse the catalog of Poland tours
Check our best tour
Escorted Tours Poland