Janow Podlaski is internationally famous for having the oldest and largest farm breeding Arabic horses in Poland. The National Exhibition of Arabic Horses and the world famous annual auction of Arabian horses draw many of the great names from the international equestrian scene. Although there is little escaping from horses in Janow Podlaski, the village has something to offer any visitor interested in sightseeing. 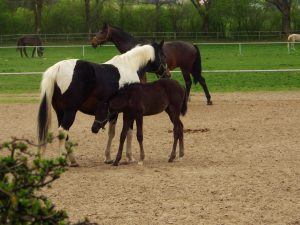 If you do not have a car, then thanks to the regular bus services, Janow Podlaski can be easily reached from Biala Podlaska in no more than 30 minutes. With its Renaissance-inspired architecture, rich and extensive pastures and park-like grounds, Janow offers a charming and simply perfect setting for both Arabian horses and the people who love them.

The National Stud Farm was established in the year 1817, and many of the historic stud buildings that can be seen today were built to the design of a Warsaw architect, Henry Marconi, in the 1830s and 1840s. Visitors who wish to tour the buildings are advised to make a prior appointment, preferably directly with the stables, though walking around the grounds is usually possible even without previous arrangements.

One curious place in Janow Podlaski is the horse cemetery, filled with stones that bear the names of the stud’s horses of merit. Quite surprisingly, the village is home to the oldest filling station in Poland, where hand-made petrol pumps are displayed. There is also a baroque church erected in the years 1714-1735 and the ruins of the 15th century bishop’s castle, just outside the town. In the ‘Podlaski Przelom Bugu’ landscape park there are just as many quiet spots for anyone with an eye for nature as there are facilities for those desiring active recreation.

Janow Podlaski is a large village with some 2,700 inhabitants. It is located 20 km north of Biala Podlaska and 35 km east of Losice, near the border with Belarus. Administratively, Janow Podlaski belongs to the Lublin Voivodship (see also our Lublin tours), and the Bialski District. If you decide to visit Janow while on a tour to Warsaw, you need about 2,5h to get there by a car.

The village resides in a region of unusual natural beauty, amplified by the Bug River with its numerous old riverbeds as well as by the interesting land relief, vegetation and structure of use of the arable land. Janow Podlaski exists under the influence of a sharp, continental climate, including features marked by large range of temperatures (from +30 to –30 degrees C) and relatively low annual rainfall and snowfall.

The first mention of the village as a settlement called Porchow comes from the year 1423. In 1465 Porchow was granted a town charter according to the Chelm Law and renamed Janow Biskupi after the then bishop, Jan Losowicz (‘biskupi’ in Polish means ‘of the bishop’). Janow’s location by the Krakow-Vilnius route contributed to the development of the town. In 1570 it consisted of 5,000 people inhabiting 500 houses. During the ‘Swedish deluge” in 1656 the defensive mansion and the two churches were completely demolished and it was only in 1780 that a late Baroque palace appeared in the place of the former mansion.

In 1818 a new Podlasie diocese was established and Janow became the seat of a bishopric. After the failure of the January Uprising, in which local people participated in large numbers, the occupying authorities eradicated the diocese. At the end of 19th century and in the early 20th century the town’s development was hindered because of lack of a railway link and any industry. Between 1918 and 1932 Janow served as the seat of the Konstantynow district, but this did not improve the economic condition of the town.

As far as the famous stud farm is concerned, its history dates back to the time of the Napoleonic Wars, which had brought a dramatic decrease in the number of horses available in Polish lands. The stud farm was established in 1817 in an attempt to give the country back its status as a leader in horse breeding. Due to help from the Russian Field Marshall, Iwan Paskiewicz, the stud farm soon entered a truly golden period. In 1841 the first brick stable was built, called ‘Czolowa’, followed by a second, ‘Zegarowa’, in 1848.

In the 1830s and 40s the stud farm in Janow was an important centre of hippology in the central Polish lands. The company possessed cups, medals and other decorations from horses purchased in Europe.

The year 1885 saw the construction of yet another brick stable, called ‘Woroncewa’. The first stallions of English and Arabian blood appeared in Janow thanks to Aleksander Nierodka, a Russian earl and lover of horses.

At the beginning of the 20th century the stud farm managed to breed its own kind of horse. During the First World War, in 1915, the whole herd was transported to the east and nearly all the horses died. After 1918, a group of Polish enthusiasts decided to re-establish the stud farm from scratch.

Would you like to visit Janow Podlaski? Browse the catalog of Poland tours
Check our best tour
2023 dates available
Escorted Tours Poland