Beautifully located in a valley, Jelenia Gora is an ideal base for trips to the Karkonosze Mountains, one of the most valued recreational and leisure areas in Poland. The town has a number of architectural buildings and other elements from various periods, some of which can be found in the intricately renovated Old Town. What is more, Jelenia Gora boasts a rich cultural life, with the most famous event being the International Festival of Street Theatre in the summer. An added attraction is Cieplice Zdroj, the oldest Polish spa, which is located within the town’s boundaries. 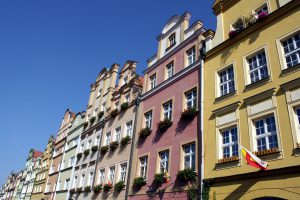 The focal point of Jelenia Gora is its market place encircled by Baroque houses, giving this place a certain aura. In the very centre stands the 17th century Town Hall, erected in the aftermath of the great fire that destroyed much of Jelenia Gora at that time. Also dating from the 17th century and located in front of the Town Hall is a stone fountain with a figure of Neptune. Near the market place you will find a true gem, the St. Erasmus and Pankracy church, built in the 15th century. Altered in subsequent centuries, today the church combines Gothic, Renaissance and Baroque architectural elements.

A sight not to be missed is the Baroque St. Cross’ Church, erected in the 17th century by a Swedish architect who designed it to be a precise copy of St. Catherine’s Church in Stockholm.

Last but not least, Jelenia Gora has a local museum situated just outside the Old Town. Besides the permanent collection consisting mostly of glass and old photographs, the museum holds cyclical exhibitions that are worth attending.

Jelenia Gora lies some 350 meters above sea level, in the valleys of the rivers Bobr and Kamienna. As it is ringed on all sides by mountain ranges, the city has a climate typical of mountainous regions, with temperatures higher in spring than in autumn and relatively warm winters.

Established in 1108 as a durable stronghold by the Polish King Boleslaw III Krzywousty (Boleslaus the Wrymouth), Jelenia Gora was granted town privileges prior to 1288, which greatly enhanced its economic development. The town rapidly grew to be an important centre for manufacturing glass, steel and high quality textiles. It was its industry that saved Jelenia Gora from extinction up to the 18th century and therefore it is not at all surprising to learn that once it fell in the hands of Prussia, Jelenia Gora became a fundamental location for the German industrial revolution.

With the coming of the 19th century, the city went through a new economic boom. The railway connections with Zgorzelec (1866) and Wroclaw (1867) as well as a nascent tourist industry stimulated the growth of the city. Left practically undamaged by World War II, Jelenia Gora came under the Polish administration and kept its status as a thriving tourist destination.

Would you like to visit Jelenia Góra? Browse the catalog of Poland tours
Check our best tour
2023 dates available
Escorted Tours Poland