Kalisz is, after Poznan, the most important administrative, economic and socio-culturalsocial and cultural center of Greater Poland. As the oldest Polish town it boasts a long and colourful history that dates back to 1800 years or more. Despite some ruinationdamage suffered during World War I, it preservedmanaged to preserve several remnants from its past, of its past – niceincluding a pleasant Old Town with Gothic and Baroque churches and fragments of city walls– that together create and old-world feel and make Kalisz a really pleasant town.worthwhile town to visit. 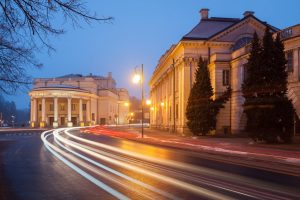 Kalisz has a great deal to offer in terms of architectural interest. Of note are the numerous bridges on theriver Prosna River that connect the several islands makingthat make up the town. One of the most eye-catching bridges, the Stone Bridge, was constructed in 1824-1825 and constitutes a brilliant work of engineering art.

Standing in the Market Place, which isstill forms the centre of the town, you will be impressed by the lavishly decorated,decorated and recently restored houses. Also nearby is the architectonicallyarchitecturally interesting neo-classicist Town Hall, erected in the 1920s. The spires of a couple of churches, towering over the Old Town,several churches tower over the Old Town and add to the charm of Kalisz.

The Museum of Kalisz Soil contains numerous exhibits recording the history of this area, as well as a collection of finds coming from archaeological excavations. Nevertheless, it is the works of the graphic artist Tadeusz Kulisiewiczin other department of museum that usually attract the most admiration on the part of visitors.attracts the greatest interest from visitors to the museum.

The town of Kalisz is located in the Greater Poland voivodship of central Poland, some 250 km southwest of Warsaw and approximately 105 km southeast of Poznan. It is only about 100-150 km to some of the other main cities of Poland such as Lodz and Wroclaw. Kalisz forms part of a conurbation with the neighbouring towns of Ostrow Wielkopolski and Skalmierzyce.

Covering an area of 69.8 km2 Kalisz is the second largest city in the Greater Poland region, after Poznan, with a population of around 108,000. The town, as is the whole region, is influenced by oceanic air currents, that make for mild weather.

Kalisz owes its status as the oldest town of Poland to Ptolemy, who mention “Calisia” in his writings. This was a town located on the Amber Trail, and the Roman caravans would stop here on their way to the Baltic shore. Archaeological artifacts from the 2nd century give some proof for this assumption, though historians are not sure whether the present-day centre of the town was populated back then.

It is most likely that modern Kalisz was settled in the 9th century. In 1106 Boleslaw Krzywousty added it to his feudal lands, and between 1253 and 1260 Kalisz was provided with the Sroda Slaska Law. While Poland underwent a period of the feudal fragmentation, Kalisz became a separate duchy governed by local members of the Piast dynasty. After Poland was reunited once more, the town experienced a heyday thanks to its weaving industry and the production of wood.

In 1282, Przemysl II of Poland confirmed the city laws and in 1314 Kalisz became the capital of Kalisz Land, one of the voivodships of Poland, by King Wladyslaw Lokietek. Due to its strategic position in central Poland, King Casimir the Great chose it as the place to sign a peace treaty with the Teutonic Order in 1343. As a royal town, the city succeeded in maintaining many of its initial privileges.

The Jesuits came to Kalisz in 1574, and in 1584 they set up a Jesuit College here. But with the passing years the role of the town was taken over by neighbouring Poznan.

Much of Kalisz’s centre was destroyed in 1792 by a great fire. The following year, as a result of the second partition of Poland, it became under the control of the Kingdom of Prussia, and then in 1806 the town was linked with the Duchy of Warsaw. However, following the defeat of Napoleon Bonaparte, occupation by Imperial Russia began. In 1902 Kalisz obtained a railway connection with Warsaw and Lodz.

In the course of the Great War in 1914, the town suffered nearly total destruction. Yet, before the Great War ended, a great proportion of the city centre had been rebuilt and many citizens had returned home.

Following the war and the Greater Poland Uprising, Kalisz was returned to the Republic of Poland. Not for long, though. Promptly after the of war in 1939 the town was captured by German soldiers.

Would you like to visit Kalisz? Browse the catalog of Poland tours
Check our best tour
16 days
Escorted Tours Poland