At first glance Katowice seems to be rather less than attractive, unless you want to learn more about post-communist transformations. However, deeper exploration of its industrial areas and unusual monuments reveals that Katowice is actually very interesting. It is the heart of the biggest agglomeration in central Eastern Europe, resembling the Ruhr in terms of the development of industry and urbanisation. Presently it is undergoing transformation into an energetic business and trade centre, with a great economic potential. 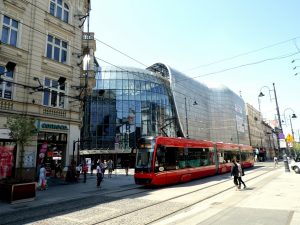 Katowice is the capital of a historical region known as Upper Silesia and the main city of the current Silesian Province. Katowice itself has around 308,000 inhabitants, one part of a 3-million agglomeration of several towns and cities. The region is the most densely populated and urbanised area in Poland.

The city had its heyday in the 1950s when its numerous coalmines and steelworks flourished.
Nowadays, the heavy industry has significantly decreased and Katowice is moving towards small businesses and trade. There are still several dozen collieries, ironworks, steel plants, and the city remains the centre of GOP (Upper Silesian Industrial Region). Each year Katowice plays host to trade fairs, including the second biggest event of such type in Poland. Travel to Katowice is convenient with the nearby Katowice-Pyrzowice international airport and an important railway hub (easy and fast connections to Krakow or Warsaw).

Apart from being the principle science and educational centre of the region, this lively city with its tall buildings comparable to Warsaw (see: tours in Warsaw) in number, offers a wide range of entertainment that can compensate for the rarity of sights. Most buildings reflect the architecture of the communist period, though there are several remnants of its 19th century impressiveness and numerous examples of modern architecture from 1920s and 1930s. Many buildings’ design was influenced by Bauhaus and De Stijl, as well as Le Corbusier’s ideas. There are also two unique districts of Katowice, which are really worth a visit: a historical worker’s area Nikiszowiec and Giszowiec, designed as garden-town. One characteristic landmark of the city is Spodek (literally “saucer”, since it resembles a UFO flying saucer), a great hall used for many purposes, including the biggest rock concerts in Poland.

Katowice is situated on the Silesian Upland, in the south-western part of the country. The area that the city covers is diverse – with a difference of 100 m between the highest and lowest points. Several rivers flow through Katowice – the biggest of which are the Rawa and the Klodnica.

For centuries the whole of Silesia was known as being rich in minerals and metals, including coal, iron, lead, silver and so on. Due to industrial character of this place, the environment is seriously damaged in places, and yet there are also numerous forests and parks. The largest and perhaps the most attractive of these is the Voivodship Park of Culture and Recreation.

The first traces of settlements on that site are mentioned by Ptolemy in the 2nd century. In the 13th century there were already some lead and silver mines in Bytom and other locations near Katowice.

The real history of Katowice began in the 19th century, when Silesia was under Prussian rule. The city grew as part of the rapid development of the mining and metallurgical industries. The construction of a railway between Berlin and Myslowice (Myslowitz) in 1846 confirmed the development and soon Katowice was granted city rights.

During World War I Katowice developed as a trading and transport centre because of the boom in Upper Silesian industry, especially in metallurgy. When Germany was defeated in 1918, Poland gained its independence as a direct result of the Silesian Uprisings and a plebiscite. The Monument of the Silesian Insurgents, erected in 1967 as a symbol to the ideas causing uprisings, is one of the most characteristic points in the city.

In the period of Poland’s independence in the 1920s and 30s, architects were able to develop many of their town planning ideas in Katowice. It became the second leading innovative area in the country, after Warsaw, and this resulted in the construction of a modern airport in Muchowiec in 1926. Muchowiec is now a district of Katowice and the airport is limited to sports activities, with a new major airport since being created in Pyrzowice. World War II did not stop Katowice being the capital of the most industrialised region of the country. The city was annexed by the German Reich and, unlike most of the pre-war Polish area that was included into the General Government, the Katowice region became a separate administrative division.

After the war the city became an important academic and cultural centre. In the years 1950-1959 the population and the total urban area grew significantly. Until 1975 Katowice had ambitions of becoming a modern city, absorbing many of the neighbouring towns in the process, including: Piotrowice, Ochojec, Panewniki, Kosyuchna, Welnowiec, Giszowiec, Dabrowka Mala and Mucki.

In 1981 Katowice witnessed the dramatic events at the “Wujek” mine, where striking workers were attacked and pacified by the police and the army, nine miners being killed in the process. The famous Polish director, Kazimierz Kutz, depicted these happenings in his film “Death as a Slice of Bread”.

Would you like to visit Katowice? Browse the catalog of Poland tours
Check our best tour
2023 dates available
Escorted Tours Poland