Scenically located on the bank of the River Vistula and encircled by low wooded hills, Kazimierz Dolny offers an impressive number of historic sights for such a tiny town. These, together with charming views of the river, the profusion of greenery, steep-sided gullies, fresh air and quaint tenement houses, contribute to the beauty of Kazimierz Dolny. For many years the town has been a magnet for artists, writers, architects and journalists seeking a unique and creativity-enhancing atmosphere. 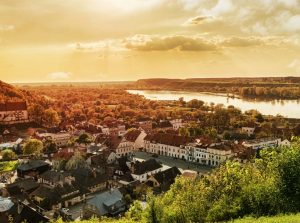 Since the end of the 19th century Kazimierz Dolny has been known as a summer resort and artists’ destination. Delightful landscapes together with numerous remains from the past attract visitors to this charming town. Rather sleepy and tranquil off season and on weekdays, Kazimierz wakes up in summer to welcome new guests, mainly arriving on a one day trip from Warsaw.

The picturesque Market Square with its old wooden well is dominated by a 14th century church and several hills, where stand the ruins of a castle. Alongside the Vistula river are several Renaissance and Baroque granaries, remembering the times when Kazimierz was an important point on the “grain trail”. Besides this, the town retains many traces of an extinct Jewish culture. There are also a few museums, some valuable buildings flawlessly integrated with the landscape and a couple of galleries. But above all, Kazimierz is favoured for its relaxed bohemian atmosphere, incomparable with any other place in Poland.

Among the prestigious cultural events that the town hosts are two festivals – the Festival of Folk Bands & Singers, held in the last week of June, and Film & Art Festival, taking place in August. The first of these festivals provides the audience with an opportunity to hear music which is today rarely performed publicly, while the other draws by far the greatest number of tourists each year to the town by offering a variety of attractions like outdoor film showings, art exhibitions and classical music concerts.

Kazimierz Dolny has a permanent population of 2,000, is situated on the east bank of the Vistula River in that part of the Lublin Upland known as the Naleczow Plateau. The town is 45 km from Lublin (see also our Lublin tours), approximately 140 km to the south of Warsaw, in the Pulawy County of the Lublin Voivodship. It enjoys a mild climate throughout the year.

Since 1979 the area around Kazimierz Dolny has been protected by special decree as a landscape park. The loess gorges, which are so typical for this terrain, have been either carved by the Vistula or are a result of human activity. 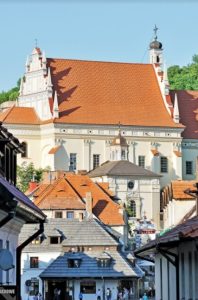 Kazimierz was the only king of Poland to be called “the Great”, and was said to have “found a Poland built in wood and left it built in bricks”. Kazimierz Dolny is one of the many towns founded during his reign in the 14th century. It was called Dolny (“lower”) to differentiate it from Kazimierz Gorny, which today is a district of the city of Krakow.

In this period most commodities were transported via rivers. Kazimierz Dolny was located on the main trade route from the Malopolska region to the Baltic Sea. Hundreds of tonnes of grain and salt, the most common goods at the time, passed through the port of Kazimierz. It developed quickly and before long turned into a prosperous centre of commerce, earning the name “Little Gdansk”.

From the beginning of the 16th century until the mid-17th century Kazimierz Dolny flourished. A large port was constructed, rich burghers made their homes in their newly-built magnificent mansions and grain was stored in almost 50 granaries. By 1630 the town’s population surpassed 2,500.

In the mid-17th century a series of misfortunes befell Poland, affecting Kazimierz as well. The Swedish invasion (The Deluge), the Northern War and the cholera plague of 1708 contributed to the town gradually losing its importance. To make matters worse, the displacement of the bed of the Vistula River to the west of Kazimierz rendered it difficult to get to the trade route. As a result, its role as a trade and cultural centre was taken over by the nearby town of Pulawy.

In the 19th century the town was rediscovered and promoted by the group of painters who chose to live there. Between the First and Second World Wars, members of an artistic group known as the St Luke Fellowship, with Tadeusz Pruszkowski at its head, took great pleasure in coming to Kazimierz.

At the end of the 19th century, attempts were made to transform Kazimierz into a tourist centre. This revival was not long-lasting, since the two world wars left the town severely damaged. Its rebuilding between 1945 and 1958 was carried out under the direction of a well-known architect, Karol Sicinski.

Maria Kuncewiczowa, a well-known Polish interwar writer, used Kazimierz as a setting for her novel “Two Moons” (1933). A movie of the same title, based on the book, was released in 1993.

Would you like to visit Kazimierz Dolny? Browse the catalog of Poland tours
Check our best tour
2022 dates available
Escorted Tours Poland