As well as being the economic, cultural and educational centre of the region, the scenically located city of Kielce is an attractive spot for people wanting to enjoy plenty of fresh air. The city also has many green areas where you can relax and play, and there are even a number of walking routes for you to try if you feel more ambitious. Kielce gives you the opportunity to rediscover nature, for there are five nature reserves within the city’s suburban area. 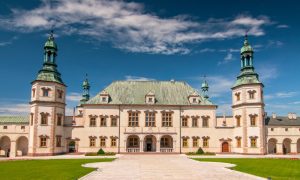 Finding remnants of Kielce’s 900 years worth of history is easy; the city is dotted with historic monuments. The best place to get to know the city is the Market Square with its collection of fine buildings, and from there you should check out the remodelled cathedral from 1171 with its valuable interior and rich treasury, the 17th century bishop’s palace with its gallery of paintings and sanctuary of Marshal Pilsudski, and the Neo-Gothic palace. That still leaves romantic towers, churches, museums, old manor houses and tenement houses to be investigated on another day.

Kielce has a marked Tourist Route, which is as yet still rare in Poland. For the far more adventurous is an 80 km long walking route that winds around the city, along the Silnica River and leads to a number of scenic sites. Many of the latter can be easily reached by bicycle, and some parts of the route are marked for motorists as well.

A significant asset is the variety of picturesque recreational areas and the good range of sports facilities, giving you an opportunity to participate in various types of active recreation and outdoor fun.

A great many of fairs and exhibitions are held in Kielce throughout the year, while the numerous restful hotels, restaurants and cafes provide top quality service.

Situated to the south of Warsaw (you can take a one day trip from Warsaw to visit Kielce) and having a population of 204,000, Kielce is the capital of the Swietokrzyskie voivodship.

The city nestles at the foot of the Swietokrzyskie Mountains, the oldest mountain chain in Europe with peaks varying considerably from 260 m to 406 m above sea level. Surrounded by forests, it lies in the valley of the Bobrza River and its tributary, the Silnica.

According to some scientists, Kielce is a great open-air geological museum, for in no other place else in the world can such a diversity of geological forms be seen as here.

Founded in 1950, the Swietokrzyski National Park embraces the highest part of Swietokrzyskie Mountains, which stretch away to the east of Kielce.

Unsurprisingly, there are several legends about the origins of Kielce. According to one of them, Mieszko, son of King Boleslaw Smialy, experienced a vision of St. Adalbert while being attacked by a band of brigands, which helped him to win. To thank the saint, Mieszko made an undertaking to build a fortress and church in the place where the miracle happened. Before long, a settlement called Kielce appeared there, which owed its name to the discovery of tusks of some unknown animal, presumably the boar (tusk – kiel in Polish).

Another legend holds that the name of the city has something to do with the nation of Celts, also known as Kelts, who while wandering through Europe decided to stay for some time in the Swietokrzyskie region. Some historians believe that the city took its name from the occupations of its inhabitants, such as building mud huts or making arrows.

The first mention of Kielce appears in the documents from 1212. Already by 1295 it had the status of city under German law. Despite the ravages by Tartar troops, Kielce managed not to go into decline – the situation even improved after the church on the Castle Hill had been buttressed. What pushed the development of Kielce was the increase in the mining of iron and non-ferrous metals in the neighbouring villages.

The prosperity of Kielce was hindered by the Swedish Invasion. Later, as a result of the Third Partition of Poland, the city became a part of Austria.

In 1809 Kielce was annexed to the Duchy of Warsaw. The possibilities for growth were much enhanced following the move of the capital of the Krakow province to Kielce in 1818 after the Free City of Krakow was established. Finally, the railway arrived in 1885, a connection leading to a genuine economic boom.

At the dawn of World War I, a Cadre Company of Pilsudski’s legions marched into Kielce, and then in September of 1914 the pledge of the Polish 1st Regiment also took place here. After Poland regained its independence in 1918, the city was established as a capital of a big province.

Some twenty years later, the advancement of Kielce was interrupted by the outbreak of World War II. Within the first days of September 1939, the city found itself under Nazi occupation. The Polish underground resistance was very active in the Kielce region, and the Red Army entered Kielce in January of 1945.

The postwar years were a period of gradual development for Kielce, reaching a peak in the 1970s.

Would you like to visit Kielce? Browse the catalog of Poland tours
Check our best tour
2023 dates available
Escorted Tours Poland