Between the Czech Republic and Silesia lies the land of Klodzko, a region where whole nationalities blended and overlapped for centuries. The town of Klodzko is the hub of the region, and although it became an important cultural, industrial and service centre, it is prevalently focussed on tourism. The Sudety Mountains encircle it, the winding river Nysa Klodzka flows through it, and there are numerous attractive sights to underline the beauty of the town. There are also a number of well-known spas and health resorts, and other excursion destinations within easy travelling distance.

Standing on the slopes of the river Nysa Klodzka, Klodzko manages to enchant at first sight. Owing to fortunate historical circumstances it is one of few Polish towns able to evade any serious damage. 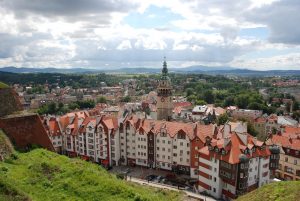 Apart from numerous historical buildings and baroque and classical tenement houses, other places of interest to be found within the town include a powerful fortress; the town hall; the Parish Church of Our Lady; the Museum of Klodzko Land, and a stone bridge. This bridge is reputed to be the oldest in Poland, and no flood has ever managed to knock it down. No visit to Klodzko is complete without a guided tour through a fragment of the 44 km of subterranean mine passages, where skeletons and genuine instruments of torture add to the creepy atmosphere.

The town’s location is advantageous as a base for people wanting to hike in the mountains or spend time skiing on the beautiful slopes nearby. Close to Klodzko you can find lovely spas and health resorts, such as Polanica Zdroj, Duszniki Zdroj, Ladek Zdroj and Kudowa Zdroj, and also small towns like 900 year old Bardo, and Zloty Stok with its Underground Museum of Mining and Gold Metallurgy.

Klodzko is situated in south-western Poland, 100 km south of Wroclaw, in the Lower Silesian voivodship. Built on both banks of the river Nysa Klodzka, it is surrounded by mountains on all sides.

Covering an area of 25 km2, Klodzko has upwards of 28,000 inhabitants and its climate is one of the warmest in the country.

Lying in the centre of the picturesque Klodzka Valley is the main town of this historic region, also known as Klodzko Land. All other towns in the region are within 50 km of Klodzko, as is the Polish-Czech border. This makes Klodzko an ideal starting point for people wanting to explore the area.

Klodzko was first mentioned in written sources in 981, although it is not known how long before this date a settlement was first established. The territory surrounding Klodzko belonged to the Slavic Slezan tribe until the end of the 10th century, when it fell under the rule of Czechs. During the Middle Ages Klodzko repeatedly changed hands. Silesia was of vital strategic importance to King Boleslaw Chrobry, and he captured the town a number of times as a result of this. After an assault by Brzetyslaw in 1038, the fortress came under the dominion of the rulers of Prague, but soon afterwards, between 1050 and 1096, it was given back to Poland.

Klodzko obtained city rights around 1223. Prince Henry Probus of Wroclaw stipulated in his will that the land of Klodzko should be yielded to King Waclaw II. In 1327 Henry, prince of Wroclaw, and Bolek Ziebicki were given it as a feud.

The Czech king, George of Pobierad, opened a new chapter in the history of Klodzko when he issued a decree in which the town was declared an independent county. The Hussite Wars hampered the rapid development of Klodzko in the 15th century. When the wars were over, Klodzko was decimated by epidemics, partially burnt and also destroyed by several successive floods.

Throughout the 16th century the dynasty of Habsburgs exercised their influence over the region. Around the same time the Austrian governors, determined to maintain their control of Klodzko Land, busily worked to ensure it would not be taken over by other rulers. With the invasion of Frederick II the Great, king of Prussia, the Austrian sovereignty came to a close. The period of unrest caused by the two monarchies struggling for power in Silesia took half the 18th century and ended with the victory of Prussia over the Habsburgs. As a result, from 1763 the land of Klodzko was a component part of Prussia.

At the opening of the 19th century, during the Napoleonic wars, destruction and famine became the common fate of the inhabitants of Klodzko. In 1807 the town was surrounded and its territory ravaged by the French, but by the second half of the 19th century the region was in the grip of an economic boom.

During World War II, poverty again struck Klodzko and the whole region. On 9 May 1945 the first Soviet tanks rolled into the town.

Would you like to visit Kłodzko? Browse the catalog of Poland tours
Check our best tour
2023 dates available
Escorted Tours Poland