A rapidly growing port town and the largest health spa on the Polish coast, Kolobrzeg has for a long time drawn native as well as foreign visitors. The sea and the 12 km long beautiful beach, the valuable historical monuments, clean air, large green areas and the choice of entertainment activities make Kolobrzeg such a popular holiday spot.

Thanks to its specific microclimate and natural curative products (therapeutic mud and brine) Kolobrzeg ranks among the favourite seaside health resorts. The town has great hotel resources, qualified basic and specialist medical personnel plus the diagnostic and therapeutic facilities essential to cater for the needs of patients of all ages. This is one of the most outstanding spas for treating diseases of the respiratory, motor and cardiovascular systems, together with diseases of the endocrine system and the metabolism. It also specialises in treating children.

Kolobrzeg’s annual calendar is loaded with attractive happenings, the most popular being the Salt Market (a trade event, and much like the ancient Mariacki Market) and the twice yearly “Interfolk” international folklore meetings that have been held here since 1992 (the first festival brought together some 100 folk groups from around the globe).

From the town’s seaport one can go on a boat trip to Bornholm and Ruggia Island, and visiting anglers are well catered for in this popular fishing area. This is also a good base for making walking and cycling tours.

Kolobrzeg is located centrally along the Polish Baltic coast, on the border with the Trzebiatowskie Coast and the plains of Gryficka and Bialogardzka. Located at the mouth of the Parseta River estuary on the Baltic Sea, it sits at an average altitude of 8 m above sea level. 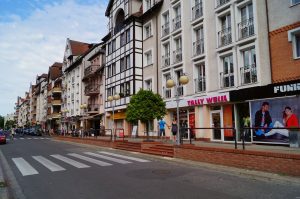 The town lies 150 km from Szczecin, the capital of the West Pomeranian Voivodship, and 44 km from Koszalin. Covering an area of 145 km2, it is home to about 50,000 people.

Kolobrzeg is separated from the open sea by a strip of sand dunes, some of them being up to 10 m in height. Although the climate can be often harsh and windy, Kolobrzeg still manages to boast the highest sunshine record on the Polish coast.

Back in the 7th century, Kolobrzeg was 4 km from the Baltic coast and the ancient settlers of the time made their living by producing salt and trading it (the settlement was known as Salsa Cholbergiensis – Salt City).

Emperor Otto III and King Boleslaw Chrobry established a bishopric here in the year 1000, but it only lasted a few years. Nevertheless, being the seat of a bishopric in those early medieval times meant that Kolobrzeg began to surface as significant political centre. However, it was not until 1255 that it gained town rights and was moved to its present location by the sea. After Kolobrzeg joined the Hanseatic League, the town underwent a considerable development in the export of salt and herrings.

By the end of the 15th century, Kolobrzeg was a town made of stone within the limits of its own walls – a visible sign of the citizens’ wealth. As early as by the 16th century saw the building of a general system of water pipes.

The Thirty Years’ War in the 17th century brought the period of prosperity to an end. Following the war, Kolobrzeg and the whole West Pomeranian region became a part of Brandenburg under the Westphalian peace treaty, and then later passed into the hands of Prussia. In addition, the end of the Hanseatic League hindered the development of commerce in the town.

During the Napoleonic Wars in 1807, Kolobrzeg was converted into a military fortress that was never taken by hostile forces, neither then nor in World War II. However, much of the old fortifications remain to this day. From 1872 Kolobrzeg no longer functioned as a military fortress – instead it was quickly transformed into a health resort. With its railway connections to Berlin, Poznan, Gdansk and Szczecin, every year saw a greater number of visitors arriving in the town.

Back in the second half of the 18th century, a section of Kolobrzeg was ravaged by fire during the Seven Years’ War. However, by the late 19th century Kolobrzeg had emerged as the largest health resort on the entire Polish coast, full of boarding houses, restaurants and small sanatoria where visitors were treated with brine, steam as well as mud baths.

During World War II Kolobrzeg was the site of bloody fighting and more than 90% of the town was destroyed. Though the Polish administration took over Kolobrzeg on June 1, 1945, it was only in 1956 that essential rebuilding works commenced and the town returned to its old splendour.

Would you like to visit Kolobrzeg? Browse the catalog of Poland tours
Check our best tour
Escorted Tours Poland