Koscielisko is a smart area, easy to reach while sightseeing Zakopane and with many villas and a genuine peaceful atmosphere. The variety and attractiveness of the landscape, diverse and endemic flora and fauna as well as extensive opportunities for sporting activities combine to make a great holiday destination both in summer and winter. You can choose from a wide array of comfortable hotels, guesthouses and rooms in private houses.

In one of the most scenic areas of the Tatra Mountains, Koscielisko is rightfully considered one of the birthplaces of Polish skiing, especially as it has produced a total of 38 competitors for the Winter Olympics, unparalleled elsewhere in the country. The place is also famous for its biathlon centre, and the number of renowned sports events, including World Championships, that have been held here. 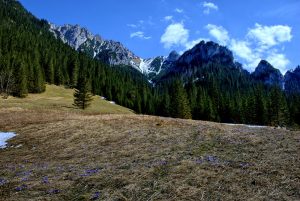 Koscielisko offers exceptionally good opportunities for cross-country, track skiing and ordinary skiing as well. Skiers of any level of ability will find thrills they can enjoy in the mountains around the village, with the majority of ski runs being suitable for beginners. If you love the white madness you will have no problems getting to the top as there are ski lifts on the open slopes as well as in the lower parts of the hills.

Numerous well-marked footpaths and around 50 km of cycle routes cut through the area for the walkers and mountain bikers who arrive every summer, from beginners to the advanced. They provide captivating views, running through forests, across fields, and along the ridges of the hills that encircle the villages. In winter, the paths are transformed into cross-country and track skiing trails.

All in all, you will find that Koscielisko is a highly attractive to visit, with its centuries-long history, distinctive folk art, ancient crafts and splendid examples of highlander architecture.

The large village of Koscielisko lies 100 km from Krakow and 7 km to the west of Zakopane. It nestles in the foothills of the Tatra Mountains, on the slopes of the Gubalowskie Plateau and at a height of 800-1150 m above sea level. Koscielisko’s location makes it an ideal starting point for trips to Gubalowka Hill and into two largest valleys in the Tatras, Chocholowska Valley (35 km2) and Koscieliska Valley (34 km2). There are also frequent minibuses leaving for other locations in the region if you do not wish to use a car.

As for the local climate, this is dry and mountainous in nature, characterised by low atmospheric pressure and intense sunshine.

Separate shepherd settlements that would later become present-day Koscielisko were recorded as early as 1623. By the time of the first free elections in 1867, Koscielisko constituted a single settlement with Zakopane.

Mass tourism in Koscielisko started in 1902, after a sanatorium for patients suffering from tuberculosis was opened on the southern slopes of Gubalowka Hill. Run by Kazimierz and Bronislawa Dluski, it was the biggest and most modern health institution in the Tatra Mountains at that time. The venture was organised by a joint stock company, with such prominent persons as Marie Curie-Sklodowska, Ignacy Paderewski and Henryk Sienkiewicz on the governing board.

Marie Curie’s family was strongly connected with the Podhale Region, and with Koscielisko in particular. As the first female Nobel Prize laureate and the only person to win it twice, Marie Curie’s scientific knowledge in the area of chemistry and medicine proved invaluable and enabled her to make a considerable contribution to the building of the sanatorium. She herself often frequented the institution during the second decade of the 20th century.

In 1928 the sanatorium was transformed into a military sanatorium, and since then it has remained the most striking edifice in the whole community. Adjacent to the main block of the current Army Recreation Complex is the house of the Dluski family. This charming residence has two names – the Larch Villa due to it being made of larch wood, and the President’s Manor for its use by pre-Second World War and recent Polish Presidents as a recreational retreat.

A number of significant national and international meetings and conferences have been organised in the spacious edifice of the Army Complex, with the participation of some grand people in politics and public life. Moreover, the Army Complex provides accommodation and catering to a great variety of important sports events on a European and world scale.

It was not until the end of the Second World War, however, that large hotels began to dot the mountainous landscape. At present, Koscielisko is a favourite summer and winter holiday destination for people who adore the beauties of nature.

Would you like to visit Kościelisko? Browse the catalog of Poland tours
Check our best tour
2023 dates available
Escorted Tours Poland