Picturesquely nestled in the Beskid Sadecki Mountains, Krynica Zdroj is one of the largest health resorts in Poland. It developed in the 19th century and since then the local mineral waters have become famous throughout the country. Already by the close of the century Krynica had become a popular resort attracting a steady stream of Polish artistic bohemians. At present, due to many investments, the town continues to be a favourite spot for holiday-makers, who can find here great opportunities for playing tennis, biking, hiking, skiing, snowboarding, horse-riding…

Krynica’s mineral waters are known for their therapeutic properties and are beneficial in the treatment of numerous diseases. Besides the drinking therapy, the waters are used in mineral-acid-carbonic baths. For visitors wanting to try out the drinking therapy, there is a choice of twenty kinds of mineral springs. While visiting one of the public pump rooms, why not try out the purple-brown Zuber? Considered to be the most concentrated mineral water in Europe, it certainly tastes and smells disgusting enough to be memorable. Other clearer and tastier waters are Zdroj Glowny, Slotwinka Jan, Jozef, Mieczyslaw and Tadeusz.

You should make time to visit the Nikifor Museum. It was founded in 1995 and houses seventy-seven paintings by Nikifor, a self-taught painter whose works first received recognition in the 1930s. The style of his painting is usually called naive art, and his preferred subjects were urban landscapes, buildings and churches. 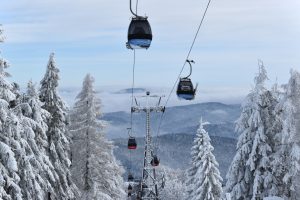 To admire views of the mountains, take the gondola railway – which will deliver you to the top of Jaworzyna Mountain (1114 m) in just seven minutes. The railway route is 2111 m long and it runs from Czarny Potok. If the weather is clear, you will even be able to see the Tatras from the peak. Another idea for you is the funicular train ride to Gora Parkowa, and next to the station can be found a runway tower for the bobsleigh track that kids will surely enjoy.

Beautiful as it is, some tourists use Krynica as base for exploring its surroundings. The region is home to a scattering of small villages, some of which you really should not miss. In Berest, Polany, Tylicz and Mochnaczka Nizna you can find Orthodox churches. However, the oldest Orthodox church in the area (dating from 1643), and one of the best known, is located in Powroznik. The neighbouring town of Muszyna is also a popular spa destination due to its mineral springs.

Krynica Zdroj is a town in the Lesser Poland Voivodship. It lies in the valleys of four streams: the Kryniczanka, Palenica, Slotwinka and Czarny. The altitude above sea level ranges from 560 m to 720 m. Krynica is surrounded on three sides by wooded hills, and there are as many as 16 nature reserves in the region, including the Popradzki Landscape Park. The climate in Krynica has features of a sub-alpine climate, which helps to increase the immunity of the body.

The first scientific record of the Krynica spring, together with a water analysis, is to be found in the work of a professor of Lvov University, which he produced following several journeys to the Carpathian Mountains in the years 1788-1795. In 1807 the town formally became a spa and it was not long before the first doctor opened an office there.

The resort with its beneficial waters has always been able to attract the biggest names in the science, literature, art and politics. That said, Krynica has nevertheless undergone many changes. In 1852 a decision was made to close the health spa. Fortunately, owing to a commission conducted by a professor of the Jagiellonian University, Dr Jozef Dietel (the main boulevard was named after him), Krynica prospered once more. The period of Dietel’s activity in the town is looked back on as the golden era of Krynica as a health resort. Numerous buildings were constructed at the time, both public ones and those serving up entertainment. Among them were the following health spas and buildings: the Old Mineral Baths, Old Mud Baths, Spa House, Main Pump Room with boulevard, a number of guesthouses, the larch theatre (destroyed by fire in 1943) as well as winter sports facilities, due to which Krynica has established great reputation as a winter sports centre (it has hosted the Europe Championships in tobogganing and the World Championships in ice hockey).

Would you like to visit Krynica-Zdrój? Browse the catalog of Poland tours
Check our best tour
Escorted Tours Poland