Kudowa-Zdroj is a picturesque spa town attracting mostly visitors in need of treatment in the excellent sanatoria or those who just care for their health. However, apart from being a spa, Kudowa, due to its location at the foothills of the Stolowe (Table) Mountains, provides excellent conditions for active leisure pursuits. You can explore the unusual geological formations, which are shaped like tables (hence the name of the range) and discover for yourself the interesting cultural heritage of the area. 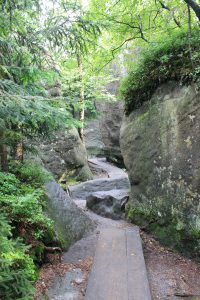 The spa of Kudowa-Zdroj is renowned across Europe for its mineral waters and therapeutic climate. Sanatoria, spa hospitals and hotels specialising in the treatment of heart diseases, arteriosclerosis, arterial hypertension, neurosis and anaemia can offer their guests baths, pump-room as well as gyms.

A very quiet and relaxing town with fine 19th-century mansions, Kudowa has some great attractions for visitors. Standing out as the most bizarre is the Skull Chapel, erected in 1776 next to the parish church in Czermna (now part of Kudowa). A lovely Spa Park, located in the centre of the town, is the place to walk among exotic plants or to sit on a bench with a view of the pump room. While in the Park, don’t forget the Lovers’ Bower and the 19th-century concert hall, the latter being the venue for the International Moniuszko Festival, held annually in June since 1962.

Outdoor enthusiasts can take advantage of the many hiking and biking trails that start in Kudowa. Varying in length and difficulty, they lead to lots of interesting places in the neighbourhood. There is a modern indoor swimming pool open all year round, and other recreational facilities including a horse-riding centre and tennis courts.

Situated in the Lower Silesian Voivodship, in Klodzka Community (south-west Poland), Kudowa-Zdroj is a town of approximately 11 000 inhabitants. Its location in a broad valley known as Kudowskie Lowering some 400 m above sea level, between the Stolowe (Table) Mountains, the Lewinskie Hills and the Orlickie Mountains, gives the town a submontane climate, which is soft and strongly stimulating.

As one of the oldest spa resorts in Europe, Kudowa-Zdroj was first mentioned in a document from 1477 by Henry the Older, son of the Hussite king, George of Podebrady. Its earliest quarter was that of Czermna. The original village was called Lipolitov, and then in the mid-16th century the name was altered to Chudoba, then Kudoba, Bad Kudowa and only in 1945 to Kudowa-Zdroj. The first record of mineral waters in the region dates back to 1580, while the spa itself was mentioned by Louis of Nachod in his chronicles (under the name of Cermenske Lazne). In 1621 or 1625, G. Aelurius, a protestant monk, described in his work “Glaciografia” the fine taste of Kudowa’s mineral waters and their beneficial effects on the health. He even stated that it was better than wine.

The first known owner of the spa was a famous general from the Thirty Years’ War, Albrecht von Wallenstein, followed by his brother-in-law, count A. E. Terzky. Wooden bath facilities were certainly present there by around 1630. The first scientific record of Kudowa’s mineral waters can be found in a work from 1694, by one Doctor Kremer.

In the 18th century, the mineral waters were being sent to Berlin. The year 1777 saw the publishing of a guidebook about Silesian spas, among them Kudowa-Zdroj and Duszniki-Zdroj. It was written in Polish by Daniel Vogl.

At the end of the 18th century the springs were sealed and the area of the present-day Spa Park drained. In 1783 control of Kudowa passed to a company of doctors, a change which contributed greatly to its development as a healing site. In 1795 a wooden bathhouse with 20 baths and a house for patients were erected. The count family of Götzen, who became owners of Kudowa following Napoleon’s defeat, promoted the further growth of the spa.

A chemical analysis of the mineral water was made in 1850 by A. Duflos, who discovered its curative properties. In 1868, a Doctor Jacob used experimental acid-carbonic baths in the treatment of heart diseases. When in 1904 a resilient company from Wroclaw bought the spa, rapid development of Kudowa was seen. Much of this impressive growth was due to the establishment of an electric plant and a railway line, which linked Kudowa with Klodzko. Numerous guesthouses as well as residential buildings appeared, and among the guests who visited the spa in this period was Winston Churchill himself.

During World War II Kudowa fortunately escaped damage and then in 1945 it returned to Poland and received town rights at the same time. Since then the town has gone from strength to strength.

Would you like to visit Kudowa-Zdrój? Browse the catalog of Poland tours
Check our best tour
2023 dates available
Escorted Tours Poland