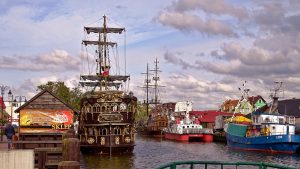 Each year in the peak season, the lovely fishing port of Leba is crammed with tourists drawn by the allure of sand, sea and nature – even when the neighbouring resorts are empty. Although Leba has little to offer in terms of historic sights, there are still some pleasant nooks, the famous shifting dunes and other attractions of the unique Slowinski National Park to marvel at. Once there, it is easy to understand why Leba is such an immensely popular holiday resort.

If you are in the mood for some lazy beach life, Leba is the place to be. Families come here for their summer vacation to pass the time on the beautiful wide sandy beach and to enjoy the water, which is reputed to be the cleanest on the Polish coast. More of a large village dotted with cottages than a town, Leba still has ample accommodation of all grades, including about a dozen camping sites. In July and August, a common sight are the snack bars and fish stalls, where you can buy freshly fried and smoked fish daily.

The town offers many alternatives to lying on the beach – it is known as an excellent place for windsurfing and horse-riding along the sands. Leba’s environs are perfect for walking excursions – and for those who prefer cycling, bike trails have been developed everywhere.

Just a short bike ride from Leba, the Slowinski National Park provides an opportunity to explore the natural environments of forests and lakes. People from all over the world visit the park mainly for a chance to see Poland’s answer to the Sahara: the great sand dunes. Their uniqueness lies in the fact that they move when the wind blows.

The Baltic Sea town of Leba is located in Middle Pomerania, 110 km from Gdansk (by the way, check why it is worth to join a Gdansk tour), on the right bank of the river from which it takes its name. To the east lies Lake Sarbsko, while to the west is Lake Lebsko. The town is surrounded by beautiful pine woods and has a population of 4,000.

Leba is a health resort with a mild sea climate, with iodine and salt in the air, a high sunshine record, strong winds from the sea as well rapid changes of atmospheric conditions.

Through the centuries, Leba has contended with the destructive forces of nature. Due to its location by the open sea, the town bas been time and time again affected by storms and waves. Moreover, only in the second half of the 19th century was the river regulated, while before that it repeatedly flooded its banks. The chronicles mention huge floods in the years 1396, 1441, 1467 and 1497.

In 1558 a violent storm on the Baltic Sea caused severe damage to the town. It was decided that Leba should be rebuilt in a slightly different location to the east, to be less subject to the wind and tides.

Leba can look back on a long and turbulent history. It was first mentioned in written sources in 1268 as a fishing village whose inhabitants fished the Baltic Sea, the rivers flowing into it and the numerous nearby lakes. Apart from fishermen, merchants and craftsmen lived there as well.

In the 13th century Leba was presumably in the possession of the local magnates. In the beginning of the 14th century the whole of Gdansk Pomerania, including Leba, came under the rule of the Teutonic Knights. In the next century Leba became a member of the Hanseatic League, a confederation of northern European trading towns that existed from the 12th century until 1669.

After the 13-year war put an end to the Teutonic dominance, Leba changed owners several more times – first it was the subject of a feud between the Western Pomeranian dukes, then for a short period of time it was placed under the direct rule of the Polish kings, in 1657 it passed into the hands of the Brandenburgs and finally of the Prussian monarchs. Gradually, the town developed and in 1791 it was populated by 500 inhabitants, with 97 houses.

With the rapid development of railway and roads in the 19th century, the sea trade lost its crucial importance. Competition from the neighbouring ports also contributed to Leba’s decline. This situation, however, was not completely disadvantageous, for after it got its rail and road connection with the rest of the country, Leba became a popular summer resort.

Would you like to visit Leba? Browse the catalog of Poland tours
Check our best tour
2023 dates available
Escorted Tours Poland