Located in Lower Silesia, the small locality of Lesna is famous for the close-by imposing ‘Czocha’ castle, built in the 13th century on top of a granite rock and today part of it housing a hotel. There are two more castles in the vicinity of Lesna, namely ‘Rajsko” and ‘Swiecie’. Visitors to the town can explore the beautiful, natural surroundings, blessed with mountains, forests, the Kwisa River and various lakes. 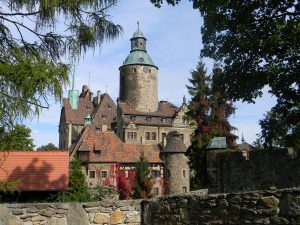 Although there are no stunning historic monuments in Lesna itself, the town is nonetheless worth a visit. It has preserved its medieval urban layout, a small town hall from the 17th century and a number of tenement houses. The complex of townsman houses with their arcades is most interesting, while you should also pay attention to the Church of St. John the Baptist, originally erected in the 16th century. Its current Baroque appearance with elements of late Gothic is the result of numerous later reconstructions and additions. The Baroque equipment may not be very impressive, but do step inside to look at 20 grave monuments with the effigies of local knights, located both inside and outside the church.

Many legends and mysterious stories surround the ‘Czocha’ castle, very much adding to its appeal. A 30-minute tour of the castle is a definite must. After the tour, you can climb up to the top of the tower, from where you can admire a picturesque view over the Kwisa River. Those with strong nerves will enjoy entering the chamber of torture, located in the castle dungeons. Lots of entertaining events are organized in the castle on a regular basis, including medieval feasts, knightly shows, concerts of ancient music and other fun-filled attractions.

Situated near the Czech border, Lesna is a small town with a total urban and suburban area of 866 ha and a population of more than 4,000. The town lies in south-western Poland, Lower Silesian Voivodship and Luban County. It is about 11 km south of Luban and 125 km west of the capital of the region, Wroclaw. Despite quite a distance, it is worth to take a trip to see the attractions of Wroclaw.

As Lesna is located in the Izerskie Foothills, the landscape can be defined as mountainous and varied, with a relatively large amount of forests. The highest elevation is the Wojkowa Mountain (502 m above sea level), which offers wonderful views of the Izerskie Mountains and the Karkonosze. Two scenic lakes dot the landscape – Lesnianskie Lake and Zlotnickie Lake.

The history of Lesna can be traced back to prior to 1247, when the fortified town of ‘Lesna’ was founded at the initiative of the Czech king, Vaclav I. Though the castle fell into ruins in the 14th century, the nearby village, which took its name from the castle, bloomed from a small settlement into a town. It is not known when and from whom the settlement received the status of a town. Perhaps this person was Henry I, prince of Jawor, lord of the town since 1319, but perhaps it is related to the reign of Askanians in the Upper Lausitz in the years 1253-1319. The first written mention of Lesna as a town can be found in an agreement between Henry I and the Czech king, John of Luxembourg, of 3 May 1329. Therefore, 3 May 1329 has been agreed upon as the most probable date of the town’s establishment.

Following the death of Henry I’s heiress in 1346, the time of the Piast dynasty rule in East Lausitz came to an end and Lesna passed into the hand of the Czech monarchs. Presumably at the turn of the 15th century it was turned into a private property. During King Vaclav’s reign, the town became the fief of the von Dobschitz family, and it remained in their possession up until 1785.

The first half of the 15th century brought many misfortunes to Lesna, among them the Hussite raids of 1427 and 1431 and a huge flood in 1432. Regardless, in the same century the town grew as a centre of crafts.

Lesna went through an especially difficult period in the course of the Thirty Years’ War (1618-1648). After the war ended, the town developed as an important centre of production in the cloth trade. Only the outbreak of the Seven Years’ War (1756-1763) and later the Napoleonic Wars (1806-1815) caused the decline in the local cloth industry.

The 1830s century saw the beginning of cotton fabric production in Lesna. In 1888 several plants formed a joint-stock company called ‘Concordia Spinning and Weaving Mill’. The arrival of a rail connection to Luban occurred in 1896, and this route was electrified in 1928.

During the Second World War, satellite camps of the Gross-Rosen concentration camp were established in the proximity of Lesna. After the war, in 1945, Lesna lost its town rights because of the small number of inhabitants, but it managed to regain them in 1962.

Would you like to visit Leśna? Browse the catalog of Poland tours
Check our best tour
2023 dates available
Escorted Tours Poland