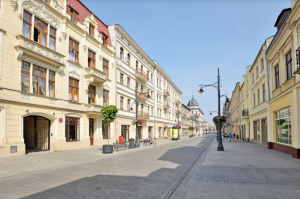 If you are looking for somewhere off the beaten track, then Lodz has it. It is the second largest Polish city, and has its own unique atmosphere. It is also sometimes known as the Polish Manchester due to its size and the fame of the textile industry that developed there in the 19th century. Unreasonably overlooked, Lodz is worth a visit and definitely deserves promotion. It features fine Art Nouveau architecture, a rowdy nightlife and the most famous Polish film school. A visit to Lodz will undoubtedly leave you with memorable impressions and a better understanding of Poland.

Lodz is the third largest urban centre in Poland with a population of about 742,000. Although the history of Lodz goes back a long way (it obtained city rights in the 15th century), its greatest development and later boom happened in the 19th century, when Lodz became a centre of the cloth industry.

Since then, the town has struggled with many difficulties, contradictions and differences, which were vividly documented in the novel The Promised Land written by Polish Nobel Prize-winning author Wladyslaw Reymont. He portrayed the multinational society of Lodz, where Poles, Jews and Germans lived together, with the inhuman face of early Polish capitalism where the rich exploited the poor. The contrasts can still be seen in the architecture of the city, where luxurious mansions coexist with redbrick factories and old tenement houses. 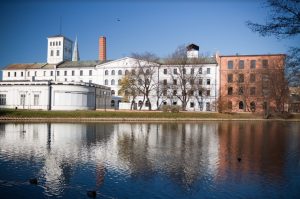 Today Lodz is a significant cultural centre, internationally known for its Film School, a cradle for the best Polish cameramen, actors and directors, including Andrzej Wajda and Roman Polanski. The local Museum of Art has the best collection of contemporary Polish art in the country. The city is thriving with industry and business rapidly developing, moving away from textiles, which has been in decline since 1991.

Lodz is located in the very centre of Poland, and still remains particularly favourable for the development of trade. The landscape can be described as being rather flat, as Lodz lies on the Central Poland Lowland area, and there are only few moraine hills on its outskirts to offset this. Although the city name means “boat” in Polish, there are no particularly large bodies of water or rivers nearby. Lodz lies on the border between the catchment areas of the Vistula and the Odra Rivers, so locally there are only some smaller rivers and brooks and these are usually hidden underground. Of course, there are still many diverse parks and woods nearby in which to commune with nature.

Lodz was once a small village that first appears in written records in 1332. In 1423 it was granted town rights, but it still remained a rather small and insubstantial town. It was the property of Kuiavian bishops until the end of the 18th century, when Lodz passed to Prussia as a result of the second partition of Poland. After spending about ten years within the borders of the independent Duchy of Warsaw, the city joined the Russian-controlled Polish Kingdom.

The 19th century brought with it constant industrial development for Lodz. The first cotton mill was opened in 1825 and soon the city grew into being the most powerful textile centre in the Russian Empire. Workers came from all over Europe, creating a multinational population with three dominating groups: Poles, Jews and Germans (in the 1930s the proportions of these nationalities was approximately 50%, 30% and 15%). During Lodz’s peak of prosperity its population was doubling every ten years. Due to the industrial background of the city it became one of the main centres of the socialist movement.

After World War I Lodz was assigned to the Polish administration, becoming the centre of a province. It retained its industrial nature, but the period of intense development was already at an end, mainly because of the loss of the huge Russian market.

Following the failure of the Polish September Campaign in 1939, Lodz was attached to the German Reich and called Littzmannstadt, named after a German general. The local ghetto established by the Nazis as a prison for 200,000 Jews was eventually liquidated in 1944. Most of its inhabitants were murdered in the camps of Auschwitz and Theresienstadt.

War did not ruin the tissue of the city but it completely destroyed the earlier diversity in its population. The pre-war Jewish and German inhabitants were soon replaced by Polish refugees from all over the country. For a few years after the war ended, Lodz effectively took the role of state capital as Warsaw had been completely destroyed. There were some ideas about moving the capital permanently to Lodz, although they came to nothing in the end.

The next decades under communist rule witnessed a rebirth of the textile industry. After the collapse of communism in Poland in 1989, most of the factories passed into private hands, but few managing to survive the new conditions brought about by capitalism.

Now Lodz is a crucial educational and cultural centre. There are 11 schools at the university level and the highly regarded Film School. The city host to two important festivals: the Festival of Dialogues of Four Cultures (festival of art) and the Camerimage film festival. Although it is rarely considered to be a tourist destination, it is popular for its specific industrial ambience, interesting architecture and friendly atmosphere.

Would you like to visit Lodz? Browse the catalog of Poland tours
Check our best tour
2022 dates available
Escorted Tours Poland