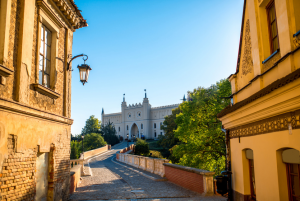 Lublin is undoubtedly worth a visit, even if it attracts fewer tourists than Krakow or Warsaw. Over the centuries it saw Polish and Jewish cultures harmoniously coexisting while the city’s fibre developed. The remnants of Lublin’s past deserve exploration, even if the sprawling suburbs might at first restrain you from going deeper. Overcome the temptation of bypassing Lublin, its Old Town is charming, though a little decayed. Besides this, the city offers other attractions, including a wild nightlife and a multitude of friendly restaurants and cafes.

While the 20th century left Lublin somewhat dilapidated, it is now undergoing a process of constant, though discreet renovation. Its unique atmosphere lures a many tourists, and few are disappointed with the numerous cafes and clubs. It is a students’ city throughout most of the year, and the many local universities and academies dominate the city.

Its picturesque Old Town, located on a low, rounded hill, boasts many outstanding sights, and looks like a ready-made medieval film set. You cannot miss the Dominican Church and the monumental neo-Gothic castle with its chapel decorated with 15th-century frescoes.

Although historically Lublin was located on the junction of several important trade routes, with direct access to Warsaw, Berlin, Kiev, Odessa, the poorly developed infrastructure has a disadvantageous impact on the development of the modern city. This can put off people visiting Lublin, although there are plans to build a new airport with international connections.

Lublin remains predominantly an academic centre, even though several industrial sectors are quite well developed, especially in the production of light vans, the pharmaceutical industry and food processing. Lublin has been organising international trade fairs since 1999.

At only 175 kilometers from Warsaw, Lublin is not only worth visiting solely for its monuments. It is a centre of one of the eastern provinces of Poland, and with a population of 350,000 it is the biggest Polish city east of the Vistula River.

Lublin is located on the Lublin Upland. The Bystrzyca river divides the city into two diverse parts: the western side is made up of undulating hills with a number of interesting valleys and loess gorges; while it is flatter on the eastern side. The city has great possibilities for recreation for western visitors with its blend of tradition, rural crafts, and a large lake and several forests to wander through.

The history of Lublin began in the Middle Ages, when the town was a trade settlement and a guard post on the eastern border of a young Polish state. The first written information about it dates back to the 12th century, and then in 1317 it was granted city rights. Its position was favourable on the trade route to the Black Sea, while its peripheral location resulted in numerous invasions.

In the 15th century Lublin was fortified, strengthened with towers and gates, and a castle of brick was constructed. Now only one tower and the Gothic chapel with its extraordinary frescoes funded by King Wladyslaw Jagiello survive from the original building. This monarch was particularly gracious for the city, making it the capital of a province and granting it many privileges.

As a trade centre, it lured people of different nationalities, turning into a common home for Poles, Jews, Ruthenians, Germans and Armenians. It was also an important centre of the Reformation movement that evolved peacefully in Poland. In Lublin lived and died Jan Kochanowski, the father of modern Polish literature and the greatest Polish poet before the 19th century.

In the 16th century Lublin witnessed one of the most crucial events in Polish history – the signing of the pact between Poland and Lithuania. This is known as the Lublin Union, and marked the beginning of the largest mainland state in Europe, which included the lands of Rus and spread from the Baltic to the Black Sea.

The 17th century brought widespread destruction of the city, caused by wars with the Cossacks and the Swedes and due to epidemics. After the partitions of Poland, Lublin found itself first in the Austrian Empire, but after the Napoleonic wars it passed into Russian hands. Following World War I Lublin returned to Poland, and for a short period was the capital of the newly reborn state of Poland. Soon after this event came the establishing of the Catholic University of Lublin (KUL).

Under Nazi occupation during World War II, many citizens of Lublin, especially Jews, were killed at the local concentration camp in Majdanek, a suburb of the city. Two Jewish districts (Podzamcze, located around the castle, and the western suburb of Wieniawa) were razed to the ground, but Jewish heritage in Lublin hasn’t been forgotten.

In 1944 Lublin was again briefly the capital of Poland, when Polish communists created a government there, later taking control over the whole country. The second university was founded and a programme of rapid industrialisation was introduced. In 1980 the workers from Lublin and nearby Swidnik factories went on strike over the price of meat, an event that started the wave of strikes that led to the emergence of Solidarity.

Would you like to visit Lublin? Browse the catalog of Poland tours
Check our best tour
Escorted Tours Poland