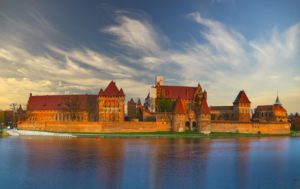 The Teutonic Order was founded around the year 1190 in Palestine to crusade against the Muslims and pagans. In the early 14th century the Teutonic Knights moved their capital from Venice to Malbork on the Nogat River, which is now in northern Poland. The most significant trace of the their presence in the town is the imposing red brick castle from 1274 on the river bank, and it is the largest Gothic fortress in Europe. You cac easily reach Malbork while on a Gdansk tour.

Malbork is visited especially for its tremendous castle that once consisted of three parts: the outer one, which is ruined and not open for visits, the Middle Castle and the Upper Castle. The sightseeing starts from the Middle Castle, the later and larger segment with three wings around the yard. There is also a Palace of the Grand Masters, a magnificent monument of Gothic architecture decorated with slim columns.

You should not miss the beautiful interiors of the building, including the Winter and Summer Chambers, one of the dormitories and the Great Refectory, with their delicate adornments and impressive vaults. Many chambers hold exhibitions including a huge display of amber and a collection of militaria. In 1997 the castle became a UNESCO World Heritage site.

Today’s Malbork has a population of 40,000, and it is a local administrative centre, a key local transport connection and a popular tourist destination. Apart from the imposing castle, you have a number of other historical sights to enjoy: the Gothic town hall, the parish church from the 15th/16th century and the 16th century Jerusalem Hospital.

In the vicinity of Malbork (in Stogi) you can find an unusual but scarcely known historical sight – a Mennonite cemetery. Mennonites were Dutch Protestants who came to the area in the 16th century to escape the Spanish rulers of the Netherlands, and while here they helped to construct many drainage channels.

Malbork is situated in northern Poland, exactly in the southern corner of the Zulawy Wislane, a flat region forming the delta of the Vistula River. Geologically the area is described as depression as it lies below sea level. Zulawy is known for its fertile soils and picturesque landscape, bisected by several branches of the Vistula. One of them, the Nogat River, flows through Malbork.

Malbork is located about 50 km south east of Gdansk and 30 km south west of Elblag.

The beginnings of the town of Malbork are intertwined with the foundation of the castle. The latter was built by the Teutonic Knights, a German military order that took part in the Crusades, where they made a name for themselves as defenders of the faith. In 1226 the Polish Duke Konrad of Masovia presented them with land along the northeastern borders of the country to gain help in fighting the pagan Baltic people who were attacking his territories. Soon they conquered the Prussians and established their own state on the neighbouring area (later, one of the German states inherited the name “Prussia”). 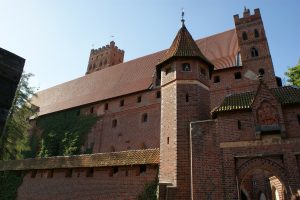 Under their rule many cities and castles were founded, including Malbork. This was also known as Marienburg, named after St Mary, the patroness of the Order. The construction of their stronghold on the Nogat River began in 1276, to be finished early in the 14th century when it became the headquarters of the Grand Master. Later it underwent some remodelling, becoming larger and larger. Supposedly, if Konrad of Masovia could have foreseen the increasing power of the Teutonic Order, then he would have wished that he had never invited them. The knights in their white coats with a black cross grew to be one of the most dangerous enemies of Poland.

Although Malbork passed to Poland in 1457, the Teutonic state existed until the beginning of the 16th century. In 1525 the Grand Master swore allegiance to the Polish king, turned to Lutheranism and dissolved the Order. Malbork remained Polish till the Partitions of Poland when it was annexed by Prussia. They first turned it into barracks, and then later it was restored during the period of the Romanticism as a symbol of mediaeval Germans’ glory. Following World War II the town with the largely unharmed castle have remained within Polish borders.

Would you like to visit Malbork? Browse the catalog of Poland tours
Check our best tour
Escorted Tours Poland