Peaceful for most of the year, Mielno starts life for real when summer arrives and brings with it flocks of people who want to enjoy their summer holidays in this seaside village setting. Mielno is perfect for those who dream of holidays on the beach, a relaxed atmosphere and plenty of attractions – this summer resort located on the shore of the Baltic Sea offers the best opportunity to make these dreams come true. 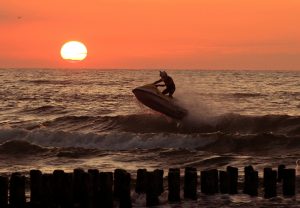 Mielno is a large village of over 2,000 inhabitants located in Western Pomerania. While in Mielno, observe how its historical architecture, especially the 19th-century villas in the centre, lends that air of grace. Some of them, richly decorated with wood, are almost fairy-tale constructions with their towers and balconies. Another historical sight is the Gothic Church of the Transfiguration, dating back to the 15th century, though its interior has been refurnished during later époques.

But the major draw for Mielno is the coastline, or more precisely its beaches. Sandy, clean and wide, they are the greatest attraction for anyone wanting to visit the village. Moreover, there is a lake in the village and another one in nearby Bukowo, so there is no lack of opportunities for you to practise water sports like sailing, canoeing and angling. A boulevard, parallel to the coastline is a favourite walking area in Mielno, especially on summer evenings as the sun goes down. Being a really popular summer destination, Mielno has an abundance of restaurants, bars also offering fresh fried fish, cafes and other places of this type which are so necessary to enjoy one’s stay at the seaside to the fullest.

The village is easy to reach because Koszalin, one of the major towns of Western Pomerania, is situated nearby and its public and private transport net includes buses to Mielno during the summer season.

Only 12 kilometres north of Koszalin, Mielno lies on the edge of the Baltic Sea, with a strip of low dunes lining the coastline and forming a boundary between the gloriously sandy beach and the village. To the south, Mielno borders on the large Jamno Lake, the village itself standing on an isthmus between the sea and lake. Due to its clean air, saturated with mineral elements and great climate, Mielno is popular also as a health resort.

The first record of a settlement dates back to the 13th century. Originally a fishing village, Mielno grew into a popular summer resort in the second half of the 19th century. The increasing numbers of tourists led to the construction of many guest houses and private villas offering rooms for rent.

The development of Mielno as the seaside resort of choice continued into the 20th century, especially in the 1920s and 30s, mainly due to the efforts of Max von Schmeling, the then owner of this area. He was also famous throughout Europe as a boxing champion. Groß Möllen, as it was called in German, became a part of Poland after World War II when all of Pomerania was incorporated into Poland.

These days Mielno is a large village, and it has recently been merged with nearby Uniescie and its health resort.

Would you like to visit Mielno? Browse the catalog of Poland tours
Check our best tour
2023 dates available
Escorted Tours Poland