The name “Muszyna” probably originated from the Latin word musci which means “moss”. Mosses used to grow on the banks of the town’s brooks. Today, Muszyna is also associated with greenery and healing waters. Nevertheless, this picturesque town in Lesser Poland is a destination not just for those seeking therapy in sanatoria (health resorts). With its numerous monuments, a lime-tree nature reserve, foot and bike trails and above all, “wellness rooms”, Muszyna is the town for people who appreciate the beauty of Polish mountains. 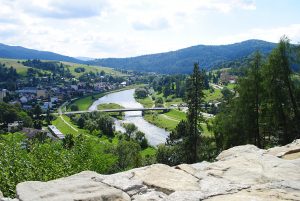 Muszyna is a famous spa resort, attracting many tourists annually. It caters to those recuperating in the numerous sanatoria. But anyone can take part in the traditional spa culture of using the “wellness rooms” and drinking the free restorative mineral waters. Muszyna is not only a perfect place for those seeking wellness but also for leisure travellers. Every year the town organises festivals such as:
• Festyn Nad Popradem (Picnic by the Poprad river),
• Noc Świętojańska nad Popradem (St. John’s Day by the Poprad river),
• Święto Wód Mineralnych (Mineral Water Day) and
• Jesień Popradzka (Fall in The Poprad).
Festivals asides, travellers can visit Obrozyska, located not too far from the town center, which has an extensive lime-tree nature reserve with the total area of 100 ha. Further points of interest include the Jewish cemetery, ruins of the elders’ castle from the 15th century and the 18th century St. John of Nepomuk chapel.
Muszyna is also an ideal place for winter breaks. Connected by 10 ski slopes to the neighbouring town of Wierchomla Mala, it is ideal for winter sports. There are ample opportunities for sleigh rides, a treat for both children and adults. In spring, summer and fall, outdoors enthusiasts will enjoy hiking and biking along the town’s trails, play tennis or dip in one of the numerous indoor and outdoor pools. The large forests around Muszyna are paradise for mushroom pickers and hunters.

Muszyna is a picturesque town in Lesser Poland situated at the altitude of 500 m above sea level. It lies in the Poprad river valley, 5 km from the border with Slovakia and 11 km from Krynica Zdroj. The Poprad Landscape Park, one of the biggest Polish parks, is in the vicinity.
The town is quite small with a total area of 23.96 km2 and population of 4,980. However, the visitor number increases greatly during summer season. Due to its mild mountain climate well suited for those with allergies and respiratory ailments, Muszyna attracts hundreds of tourists every year.

Muszyna’s origins are strongly connected with an old “Hungarian” trade route that stretched along the Poprad river valley. The first records of the town are from 1209. It started as a colony belonging to the Niegowicki family. In 1288 Muszyna was inherited by Krakow bishops. However, two centuries later as a result of an argument with Jan Muskata, one of the bishops, it was handed over to King Wladyslaw I the Elbow-High. The next 80 years saw Muszyna under the reigns of Polish monarchs. The colony obtained town rights in 1356.
In 1391 Wladyslaw II Jagiello established an agreement with the bishops, resulting in the bishops regaining possession of Muszyna. From then on, the town was treated as an independent area with its own administrative and legislative systems, and its own army. Although Muszyna was legally bishop-owned, the real power was in hands of the so-called “elders”. The most famous of these “elders” was Stanislaw Kepinski, a close friend to the outstanding Polish poet Jan Kochanowski.
Muszyna remained the bishops’ property until 1781. After the partitions of Poland it fell under Austrian rule. It was in 20th century when the town was reunited with Poland and in the 20s it gained fame as a spa town. Unfortunately, the Second World War led to a complete devastation of the resort and only in 1958 it started to function as a spa again. These days, the spa is a destination for people with respiratory ailments and allergies.

Would you like to visit Muszyna? Browse the catalog of Poland tours
Check our best tour
2023 dates available
Escorted Tours Poland