The first impressions of Olsztyn may leave you little underwhelmed, as the post-war suburbs through which the visitors must first travel when entering the city are cluttered with displeasing grey buildings and factories. After reaching the city centre, however, you will discover that Olsztyn has much more to offer than the usual post-war greyness. This is where Olsztyn hides all of its most precious treasures, most notably the picturesque Old Town full of impressive sights and monuments. Finally, with its numerous lakes and municipal forests, Olsztyn is likely to take you aback with the variety of leisure activities it offers. 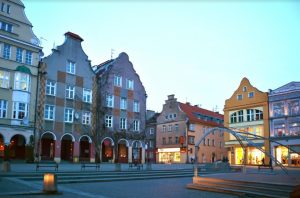 The capital of Warmian-Masurian Voivodship, Olsztyn is the largest city of the region and is inhabited by some 176 000 people. Due to its official function, the city houses all the most important institutions of the area and draws investors from all over the country. Olsztyn is also a renowned cultural and academic centre, boasting a large philharmonia and a university in addition to the numerous cinemas, theatres and cafes. What’s more, the city is heavily influenced by both Polish and German cultures, which manifest themselves in cuisine and customs of its inhabitants.

Olsztyn’s popularity amongst tourists springs from two factors – its sights and its setting. The most attractive part of the city is the centrally positioned Old Town, encircled by a set of fortified walls. Despite its name, the Old Town is far from ancient. Due to the damages inflicted by the Red Army during the World War II, the area was almost totally destroyed, leaving only mere remnants of buildings dating back to medieval times. Recently, however, many of the demolished monuments have been carefully reconstructed, amongst them the Upper Gate (also known as the High Gate), the 14th century Gothic Castle of the Warmian Chapter and the majestic Cathedral of St. James. Being located in the centre of a famous lake district means that, apart from impressive sights, Olsztyn can offer a wide range of leisure activities, such as swimming, kayaking, biking and hiking.

Olsztyn is located in the northeast part of Poland, on the Lyna River. This capital of the Warmian-Masurian Voivodeship is surrounded by thick forests, which account for 20% of the whole city suburban area. There are also two preserves nearby (Mszar and Redykajny), three rivers and 13 large lakes (including the Dlugie and Redykajny Lakes), which comprise 8.75% of the municipal area. Such surroundings make the city a popular holiday resort, with people flocking here to relax in its calm and pastoral ambiance. Olsztyn is also an important transportation hub, lying some 90 km from the Russian border and 165 km away from Gdańsk and its attractions.

Though certainly a historic city, Olsztyn received municipal status relatively late in comparison to other major towns in the region. Though the first mention of the city dates back to 1334, Olsztyn received its municipal rights as relatively late as 1353, which is taken as the date of founding the city. The initial Prussian name of to the city was ‘Allenstein’, which roughly meant ‘the city located on the river Alna (Lyna)’. At first rather small, Allenstein easily succumbed to the clutches of the Teutonic Knights, who by that time already dominated the region. Surprisingly enough, soon after the first fortified castle and the Gothic St. Jacob Church were built, the city was conquered by Poles, who drove the Teutonic Knights away. Afterwards, the city prospered in a relatively peaceful environment, but for a short period only.

Eventually the Teutonic Knights returned and with them the era of repression. As an act of insurrection, Olsztyn joined several other Prussian cities in 1440 to create the Prussian Confederation, whose aim was to help Poles battle the Teutonic Knights. After a successful rebellion by the Confederation, Olsztyn joined Poland in 1466, and following the 2nd Peace Treaty in Torun the city became the capital of the Warmia region. The Teutonic Knight tried to conquer the city once more in 1521, but the campaign was largely unsuccessful. Olsztyn managed to force the enemy back, partially due to the assistance of the renowned Polish astronomer, Nicolas Copernicus, who at that time was serving as the administrator of Allenstein and nearby Mehlsack.

After the war Olsztyn entered a period of prosperity, taking advantage of its convenient location on the major trade route leading from Warsaw to Królewiec. Consequently, the city was transformed into a major trading centre. Unfortunately, the economic boom came to end in the 18th century when the Swedish army invaded Poland, almost completely destroying the city and the region. Worse still, after the invasion the city’s inhabitants suffered from starvation and the bubonic plague. Ultimately, after the partition of Poland in 1772, the weary Olsztyn was annexed by the Kingdom of Prussia.

The 19th century brought with it the greatest development of the city. Its first hospital, railroad, gas infrastructure, and water systems were constructed, including the first telephone line in 1890. Additionally, numerous new buildings were erected, including a new town hall and the Neo-gothic church of the Holy Heart of Jesus. All these factors contributed the industrialization of the city and the rapid growth in its population (from 4000 in 1845 to 25 000 in 1895). In 1871 Olsztyn joined the newly founded German Empire and became almost exclusively German. Conversely, in 1886 the first issue of the Polish newspaper “Gazeta Olsztyńska” was published, to help unify efforts to keep the Polish elements of Olsztyn’s culture alive.

The 20th century saw one of the most tragic periods in the history of the city. Following Word War I, in 1920, the whole Warmia region decided to join Germany instead of Poland. During the following two decades the city expanded even more, becoming one of the biggest cities in the area. However, near the end of the war the Russian Red Army forced its way into the city and, after a short occupation, the soldiers set the city on fire. As a consequence, Olsztyn was 40% destroyed and, like many other cities in the region, it entered a period of stagnation. The spell of poverty was not broken until 1967 when a tyre manufacturing plant was established nearby. Interestingly enough, after rejoining Poland in 1945, the city underwent a process of polonization in an attempt to reconcile it with the rest of the country. The action was largely successful, for the city was recognized for its persistence in preserving its Polish culture despite the century long period of germanization. Olsztyn has also written itself onto the pages of history as a city with a strong following of the NSZZ Solidarność movement. In 1989 the city had its first democratic local elections.

Would you like to visit Olsztyn? Browse the catalog of Poland tours
Check our best tour
2023 dates available
Escorted Tours Poland