Though Opole is primarily known as the home of the National Festival of Polish Songs, held here since 1963, the city offers plenty to do and see all year round. Every year, Opole hosts new and regular events, fairs, shows and competitions. Most places of interest are easily accessible from the historic centre of the city, making it possible to view them all even if you have only a few hours to spend in Opole. 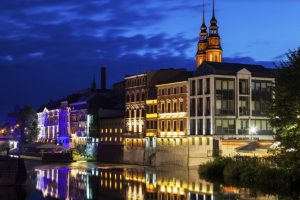 Opole is not just the capital of Polish song; it is a city that seamlessly combines culture, education, tourism and business. It is small, yet enchanting, with numerous canals and green spaces adding to its charm.

Some of the points of interest are the historic churches and monasteries (fragments from 1280), the tombs of Piast princes and a huge tower that is the only remnant of the castle dismantled by the Germans in 1930. Encircled by fine tenement houses, the magnificent market square is the location of the town hall, which brings to mind the Palazzo Vecchio in Florence.

While almost all of Opole is situated on the mainland, on either side of the river Oder, it also includes two islands, Bolko and Pasieka. Lying in the middle of the river Oder, the former is definitely worth a trip as it offers some wonderful walking areas, with playgrounds hidden in the park, a lovely pond and a zoo.

The city has numerous hotels and restaurants that offer the specialities of Silesian cuisine that Opole is well known for. The warm months sees the sidewalks blooming with umbrellas as numerous popular cafes open for the season.

Opole, the capital of the Opolskie voivodship, is a medium sized city of 125,000 and coverings a total area of 96 km2. It is located in the south-western part of Poland, on the river Oder as it crosses the Slaska Plain. As a consequence, the region can be described as typical agricultural lowlands.

Its position in the open valley of the river Oder gives Opole a mild climate characterised by low temperature variations and a small amount of rainfall. The average annual temperature is 8° Centigrade, and the winters are very short and mild while the summers are long with warm days. These climatic conditions encourage outdoor sports and recreational activities.

Leaving legend aside, the name Opole originates from the old Polish word “opole”, meaning an ancestral territorial community. Another explanation of the origin of the city’s name is that it comes from the simple word “pole” (field in English): as the legend goes, there once lived a tribal lord who had lost his way while hunting in the thick woods, and when he eventually came across a settlement, he cried “O! Pole!”. Following that, he decided to start a city there.

With a known history dating back to the 9th century, Opole is one of the oldest towns in Poland. A “Bavarian geographer” was the first to describe the town of the Opolanie (one of the Slavonic tribes), situated on the river Oder. However, the origins of Opole as a town are connected with the signing of a document giving it the rights of a town in 1217 by Kazimierz I, grandson of the Polish king, Boleslaw Krzywousty. In this way Opole came to be the capital of the Opole-Raciborz Principality. In 1283, Kazimierz I ordered a family residence to be built, known as the Piast Castle, on Pasieka Island. The city’s position on the intersection of several main trade routes helped generate steady profits from transit trade.

Following the death of the last ruler of the Piast dynasty, Opole was incorporated into Brandenburg and later Prussia. Under Prussian control, a strong inflow of settlers from Germany accelerated the process of intense Germanisation.

In 1751 Opole was home to 1,186 people. When the seat of the regency was established here in 1816, the town began to develop rapidly. The first railway connection linking Opole with Brzeg and Wroclaw was completed in 1843. Beginning with the creation of the first cement factory in 1859, the cement industry has continued to contribute to the development and prosperity of Opole.

After the division of Silesia in 1922, Opole together with a large part of Upper Silesia remained on the German side. On March 24, 1945 the Polish administration took control over the city, which at that time only had 200 permanent inhabitants. More than 900 houses, most of the industrial plants and all the bridges had been destroyed during the course of the war. However, with the coming of peace, people immediately embarked on rebuilding their town. Opole was established as a district capital in 1950 and has been developing very actively ever since.

Would you like to visit Opole? Browse the catalog of Poland tours
Check our best tour
2023 dates available
Escorted Tours Poland