Ostroda, a town of about 35,000 inhabitants, is the fourth largest town in the Warmian-Masurian Voivodeship in terms of population. Situated in the Ilawa Lakeland and by Lake Drweckie, it is considered an ideal summer holiday destination for water sport enthusiasts and keen anglers. Ostroda is also a good starting point for trips to Gdansk, Olsztyn and Elbląg. 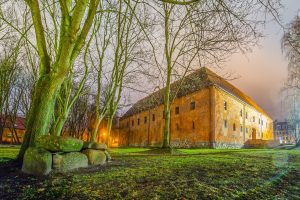 When in Ostroda, the first thing to do is head towards the pier. The “L”-shaped pier, with a length of 50 by 30 meters, hosting a great number of pubs and cafes is the town’s biggest attraction and the most frequently visited place.
In summer, tourists often go the beach by Lake Sajmino. Bridges, slides and beach volleyball grounds attract both children and the slightly older amateurs swimmers.
For the beautiful panorama of Ostroda, the best viewing point is at the top of the Evangelic Church in Sienkiewicza Street. To reach it, you have to climb 105 steps of the stairway. We recommend coinciding your ascend with the midday bugle-call of Ostroda.
Another worth-a-visit place is the castle from the early 14th century. In 1807 it played host Napoleon Bonaparte, who used it during his campaign. Nowadays, it is adorned with numerous paintings and keepsakes from that period.
An unquestionable attraction of the town is a cruise on the Ostroda-Elbląg Channel. The technical design of the waterway is a key appeal. At the slipways, the boats are hauled onto dry land using special carriages giving the impression of the boats sailing on grass. This unique solution and the surrounding nature make the cruise on Ostroda-Elbląg Channel an unforgettable experience.

Ostroda, a picturesque town in the Warmian-Masurian Voivodeship, is situated in the western part of Masuria, at the altitude of about 100 m above sea level. It lies in the Drweca river valley, 40 km from Olsztyn and 70 km from Elblag. There are 15 lakes in the vicinity of the town making it a perfect holiday destination for water sport enthusiasts and keen anglers.

The first written records of Ostroda come from the middle of 13th century when the area was the property of the Teutonic Order. In 1270s they began building of a watchtower around which the village later expanded. The first settlers of the town were probably Germans from Osterode am Harz. We speculate that Ostroda derived its name from that city.
Ostroda obtained town rights in 1329. In 1349 the building of a redbrick castle began. Works, interrupted by a fire in 1400, lasted until 1408. When the castle was eventually completed, the Great Master of the Order Ulrlich von Jungingen visited Ostroda to inspect the preparations for the war with Poland (1410 – the battle of Grunewald).
In 1440 Ostroda joined the Union of Prussian Towns, an organisation opposing the policies of the Teutonic Order. Throughout the years, the castle in Ostroda was a subject of conflicts, especially during the war between the Teutonic Knights and Poland. Among the castle’s residents were Swedish King Gustaw Adolf in 1628 and the Emperor of the French, Napoleon Bonaparte, in 1807.
Another well-known person connected with Ostroda was Gustaw Gizewiusz. In 1834 he
became a pastor of the Polish evangelical church. He was also a great author of scientific dissertations and a collector of folk songs. Gizewiusz even ran for elections to the Berliner Parliament; unfortunately, he died unexpectedly in Ostroda before results were announced.
From 1886 to 1919, under the rulings of Gustaw Adametz and Alberta Elwenspoeck, Ostroda enjoyed a “golden age.” The town developed rapidly, and electricity, gas, water pipe systems were set up and new houses, roads and streets were built.
When the Red Army entered Ostroda in 1945, they saw only 2,000 inhabitants left. The Soviet soldiers burnt the old town completely. To date, it hasn’t been fully restored.

Would you like to visit Ostroda? Browse the catalog of Poland tours
Check our best tour
Escorted Tours Poland