Przemysl is one of the best of the hidden treasures of Eastern Poland. Virtually unknown outside the region, the city boasts sights and attractions that are likely to impress even the most demanding of travellers. While here you might notice that against its rich trading tradition and the recent industrial boom, Przemysl still emanates the sophisticated charm of the Hapsburg Empire to which it formerly belonged. If you’ve had enough of medieval monuments, impressive architecture and absorbing museums, in Przemysl you can also go for a day-long shopping spree through the city’s 500 shops and bazaars. Should you prefer a relaxing stay near in the open, the beauty of Przemysl’s municipal forests and the nearby Country Park are likely to satisfy your needs.

Situated in the Subcarpathian voivodeship, Przemysl is a city of about 67,000 people, making it one of the largest cities in south-eastern Poland. Due to its proximity to the Ukrainian border, the city has always been a thriving trade centre. Przemysl has developed flourishing metalworking, textile, and timber-working industries, and today the city is becoming one of the region’s most promising business centres, drawing investors and business people from all regions of Poland and neighbouring countries. 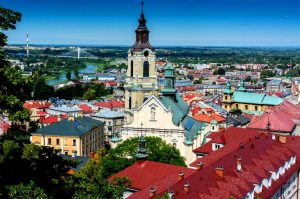 Besides doing business, Przemysl is also a great place to spend your holidays. The town is very tourist friendly, offering a good range of hotels and pensions at reasonable prices as well as being simply fascinating to explore – especially if you remember that after Krakow, this is the second oldest settlement in southern Poland. Immediately after crossing the city walls you will notice plenty of sights to remind you of Przemysl’s former glory, including the 18th century Franciscan Church, which has some of the finest examples of Austrian Baroque. Don’t miss the late-Renaissance Carmelite Church with its unique pulpit shaped like a ship, or the nearby Cathedral, which incorporates remnants of a 12th century rotunda. Complete with numerous museums (the Diocesan Museum and Museum of Bells and Pipes being particularly recommended) and a square lined with cosy cafes and restaurants, Przemyśl is a must-see, especially if you are seeking a convenient base for further exploration of Eastern Europe.

Set in the San River, the city of Przemys is located in the Subcarpathian Voivodship, just 12 km from the Ukrainian border. Spreading over the Carpathian foothills, the city provides an excellent base for exploration of the Bieszczady Mountains. Apart from the mountains, the city is also encircled by dense forests that form part of the Country Park natural preserve. The city can be easily visited from nearly all parts of Poland – it is the last stop for the main rail and bus lines running through the region.

Przemysl is considered to be one of the oldest settlements in Poland, and the second oldest in southern Poland. Its history dates back to the 8th century when, according to legend, the city was founded by a hunter after bagging a huge bear (thus the bear in the emblem of the city). Another account claims that the city was set up by the Polish Duke Przemysl. In the 10th century the area, including the already prosperous Przemysl, was conquered by neighbouring Hungary and Kievan Rus. From then on the city was the subject of constant quarrels between these two countries and Poland.

The city became a part of Poland in 13th century and immediately received privileges from King Wladyslaw Jagiełło. Throughout the next two centuries the city prospered as a centre of trade and transport, growing as an important urban centre for the area. The city also acquired a distinctly cosmopolitan appeal, partially due to its multi-national society that comprised Jews, Ruthenians, Poles, Czechs and Germans. The times of prosperity and relative peacefulness came to end in the 17th century with the Swedish assault on Poland and the steady decline of the Polish-Lithuanian Union. Soon after the war, however, Przemysl restored its former status as a commercial centre.

After the First Partition of Poland in 1772, the Austrian Empire annexed Przemysl and the rest of Galicia. During that time the city experienced an economic boom, leading in 1861 to Przemysl being able to afford its first railroad connection – with Kiev. In the mid-19th century the city also played an important role during the conflict between Russia and Austria over the Balkans. Austria realized the strategic position of Przemysl, turning the town into a fortified stronghold against the enemy. The process of fortification lasted till the early 20th century, when Przemysl became one of the most secure cities in Europe with a capacity to accommodate about 80 000 soldiers and 950 cannons. Despite this, the city surrendered to the Russian Army during World War I due to a lack of food and water.

After the World War I the city was returned to Poland, but not without perturbations. Apart from Poles, Ukrainians also claimed that Przemysl should become a part of their country. In response, the Polish army entered the region in 1918 and this led to the Battle of Przemyśl. For a long time neither side could gain any advantage over the other, but finally the Poles, aided by a group of boys from the local ‘Orleta’ high school, managed to suppress the Ukrainian army and incorporate the town of Przemysl into Poland.

During World War II, when the Germans conquered the left bank of the San River, Przemysl laid precisely on the border between Germany and Soviet Union. Due to its strategic position, the city’s population of Jews grew to over 15 000, for many of them wanted to use the city as a crossing point into Russia. In 1941, however, the Germans conquered the Jewish part of town, and by 1942 the first group of Jews were transported to the Auschwitz concentration camp. In 1944 the Russians finally reclaimed the town and after the war Przemysl was once more reunited with Poland. Unfortunately, the city was heavily damaged and its resources of salt and oil were annexed by Ukraine. All these factors forced the town into relative stagnation in the following decades. Since the fall of the USSR in 1991, however, Przemysl has been constantly improving its position, striving to restore its former status.

Would you like to visit Przemyśl? Browse the catalog of Poland tours
Check our best tour
2022 dates available
Escorted Tours Poland