Although Rzeszow is the second most important city of south-eastern Poland after Krakow, a walk through the centre is more like that through a small, peaceful (or even sleepy) town. In fact Rzeszow is a progressive economic, academic and cultural centre, the capital of the Subcarpathian Province and one of the largest cities in the region. 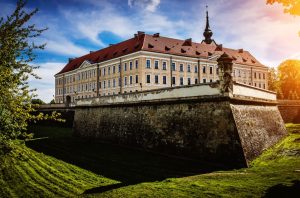 For centuries Rzeszow took advantage of its location on a major east-west route linking Krakow, Przemysl and Lwow (L’viv) with the Black Sea. Even today, this route still plays an important role in city life, as Rzeszow is situated on International Road No 4, running from Germany to Ukraine along Poland’s southern and eastern borders.

With its population of over 172 ,000, Rzeszow is now one of the largest cities of the region and the capital of the Subcarpathian Province. An important influence on the city’s development has been the modern international airport, Rzeszow-Jasionka, situated 10 km north of the city centre.

Local trade and industry is continues to develop, partly due to several important investors, including Zelmer, Alima-Gerber, ICN-Polfa. Various commercial events and exhibitions are organised in Rzeszow throughout the year. Besides this, the city is the main academic centre of the province, and well known for its polytechnic. The estimated number of students in the city is 50,000, almost a third of the city’s population.

The city lost its traditional appearance due to the wartime damage and the subsequent industrialisation. As a result, Rzeszow can seem a little soulless, yet its old town is still worth a visit.

If you have some free time, you may visit Krakow, which should take no more than 2 hours of driving (thanks to easy access to A4 motorway).

Rzeszow is situated in Subcarpathia, the southeastern corner of Poland, adjoining the territories of Ukraine and Slovakia. The city itself is about 100 km from the border with each neighbour. Geographically, Rzeszow’s location can be described as borderland Sandomierska Basin and Carpathian Foothills. The Wislok River passes through the city, and forms a wide valley.

The climate in the region is rather warm in comparison to the rest of the country. 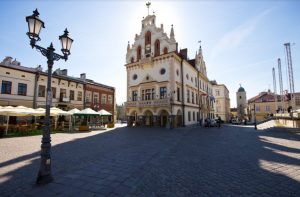 The first recorded reference to Rzeszow dates from 1354,when it was granted a town charter by King Casimir the Great. Thanks to the trade routes to the territories of today’s Slovakia, Hungary and Russia it was able to develop rapidly. This period of prosperity did not come to the end even when a major fire in the 15th century destroyed the old town, together with 14th-century parish church. The city was soon rebuilt and received several privileges, including permission to sell beer, wine and salt as well as to run market stalls.

In the 16th century the Wislok River up to Rzeszow was recognised as being navigable, giving the town a direct connection to the city of Gdansk and that of the Baltic Sea. The city owes its golden age to a local ruler, Mikolaj Spytko Ligeza, who built the castle and the town hall. The period of greatest prosperity was at the end of the 16th century and the beginning of the 17th century, when it became an important centre of trade and craftsmanship.

From the 17th to the 19th century, Rzeszow and its surrounding estates were the property of the Lubomirski family. They established a famous Piarist College in 1658, which at the time was one of the few secondary schools in Poland. Among its later students there were Ignacy Lukasiewicz, inventor of the kerosene lamp; Wladyslaw Sikorski, a Polish general during World War II; and Julian Przybos, a great poet. Today, College No 1 in Rzeszow continues the traditions of the former Piarist school.

The end of the 17th century was disastrous, caused by wars, a tragic fire and the unfortunate policy of the Lubomirski family. During the Bar Confederation Rzeszow became a battlefield between the Russian army and Polish defenders. To commemorate the victims, the people of Rzeszow erected a mound that can still be seen in the district of Pobitno.

Following the Partitions of Poland, Rzeszow belonged to the Habsburg Empire, gradually loosing its importance in favour of Przemysl. It did not regain its position until it was returned to Poland after World War I. The 1930s saw the introduction of military industry, and the aircraft production plant established then still functions while the branch of the Hipolit Cegielski factory from Poznan, producing anti-aircraft cannon, was later destroyed during the Second World War.

In 1939 the development was once again interrupted by war, which brought great destruction to Rzeszow and the deaths of many people. The large pre-war Jewish community almost disappeared and today the only noticeable traces of their presence are two synagogues, the Jewish cemetery and the names of several streets.

Following the end of German occupation, Rzeszow became the capital of the province, growing into the administrative, cultural and academic centre of southeastern Poland. The intense process of industrialisation and the annexation of nearby villages have led to Rzeszow significantly extending its borders.

Would you like to visit Rzeszow? Browse the catalog of Poland tours
Check our best tour
Escorted Tours Poland

Recommended tours while stay in Rzeszow